Gakken Holdings Co., Ltd.
A must-see for station lovers and railway fans! 170 carefully selected ways to walk around the world and Japan’s “great stations” that you want to visit once! Introducing amazing points and trivia related to travel with beautiful photos
“Station” is the stage of meeting and parting. Spectacular scenery, unexplored areas, beautiful architecture… There are as many trips as there are stations. Chikyu no Arukikata editorial department, who has been walking around various places for many years, will explain the world you want to visit at least once, and the attractive stations full of travel in Japan, along with travel trivia. 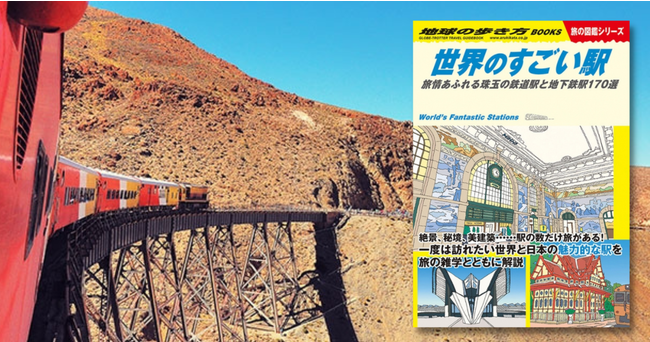 Commentary on the world’s amazing railway stations and subway stations that you want to visit once, along with travel trivia
From the popular [Chikyu no Arukikata Travel Encyclopedia Series] comes the “World Station” encyclopedia!
The editorial department of Chikyu no Arukikata, who travels around the world and walks around the world, has collected amazing stations from around the world that you would like to visit at least once. A station with a spectacular view, a station nestled in a secluded area, a station with a breathtaking exterior and interior, a station that makes you think about the weight of history… 170 train stations and subway stations carefully selected from all over the world, including Japan, are thoroughly explained with beautiful photos and trivia related to travel.
■Interview with railroad photographer Hiroshi Sakurai My top 3 best stations! [Image 2 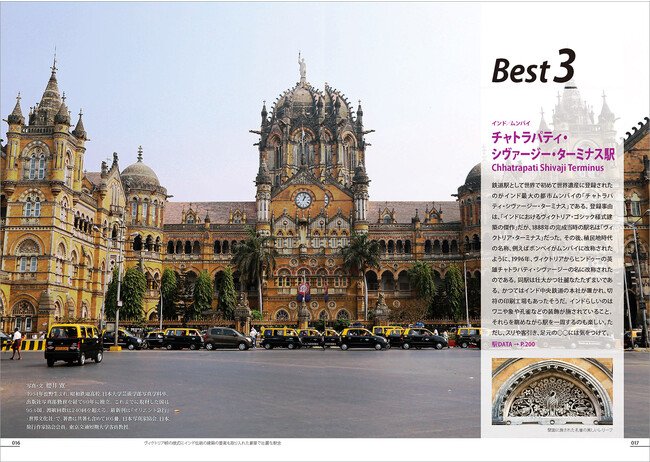 In the opening feature, railroad photographer Hiroshi Sakurai introduces the best 3 recommended stations.
Hiroshi Sakurai, a railway photographer who knows all about railways and stations around the world, carefully selected 3 recommended stations! The third place is Chhatrapati Shivaji Terminus Station in Mumbai, India, which is the world’s first railway station to be registered as a World Heritage Site. Which station was chosen as the number one!?
■Stunning stations in the world that you want to visit once in a lifetime [Image 3 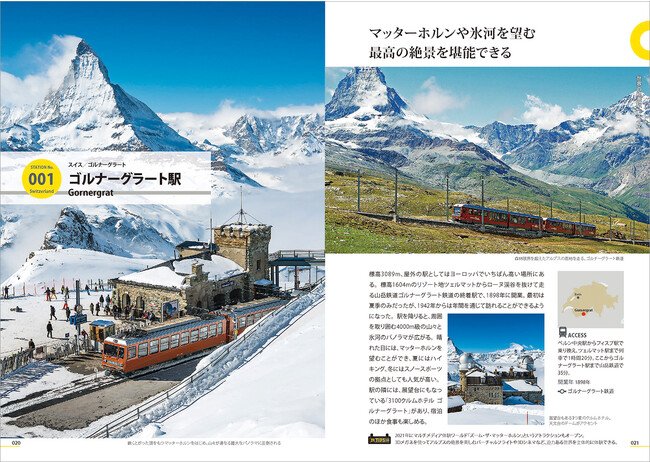 Gornergrat station in Switzerland. The best view of the Matterhorn is waiting for you!
We have selected beautiful stations from around the world with spectacular views that are irresistible for station lovers and travel lovers, such as stations where you can overlook the glacier, stations where you can see the sunrise, and stations that seem to float on the sea or lake.
Rothorn Kulm Station / Saltburn Cliff Station / Cologne Central Station / Okuoi Kojo Station / Ibyu Station, etc.
■ Become a station doctor!? Thorough introduction of 170 “great stations” by area!
Europe, North and South America, Oceania, Middle East/Africa, Asia, and Japan. Detailed explanations of the gem stations in each area from various aspects such as history and architecture.
[Image 4 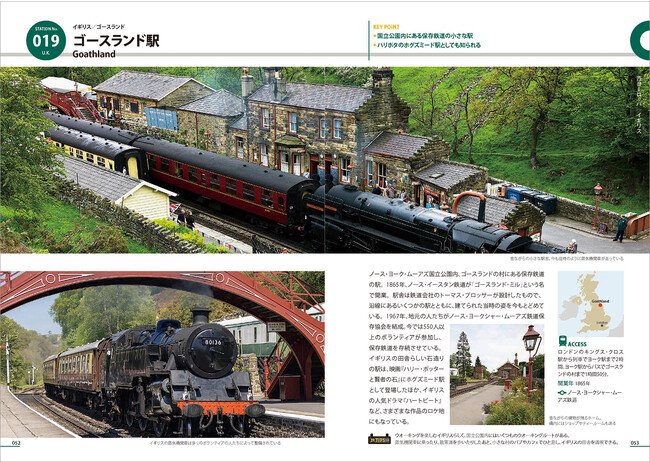 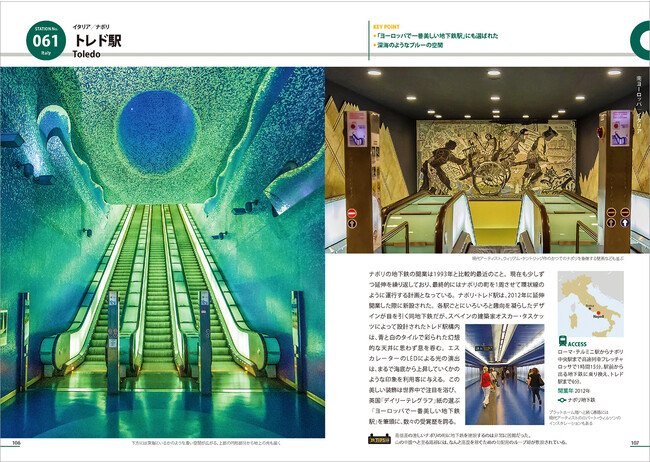 Toledo station in Naples, Italy, selected as one of the most beautiful subway stations in Europe
[Image 6 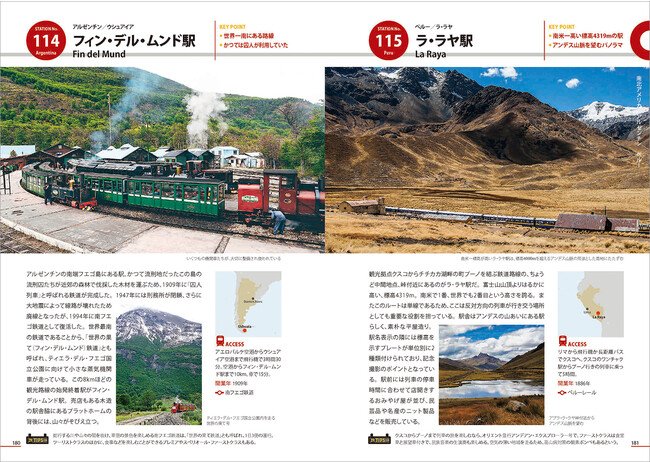 The adventurous South American station will inspire your travels [Image 7 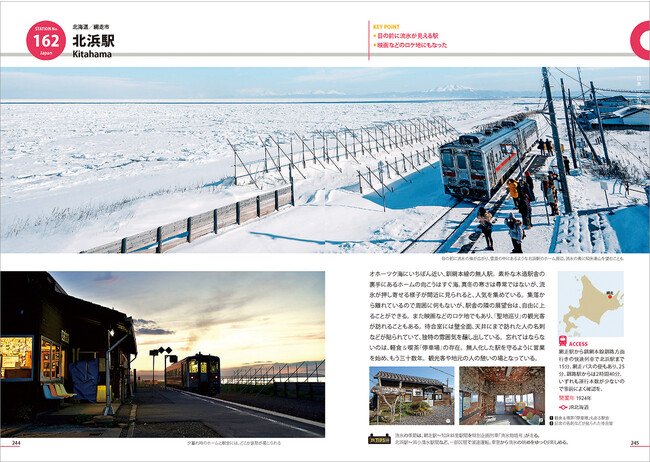 Kitahama Station in Hokkaido. Closest to the Sea of ​​Okhotsk, where you can see drift ice up close
In addition, there are many trivia columns that deepen your knowledge of stations, such as “stations that appear in movies”, “100 stations in the world”, and “attractive restaurants at stations”!
[Image 8 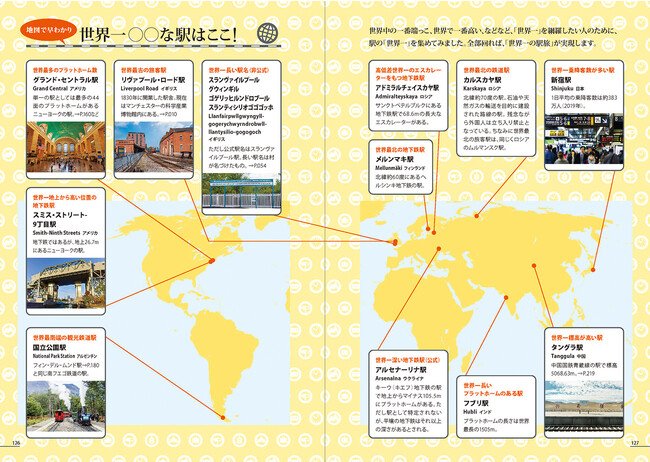