LIFULL Co., Ltd.
A thorough investigation of the key to a satisfying home for 500 people who built custom homes!
Rising resource and energy prices and rising environmental awareness are affecting custom-built home purchases! ? The decisive factor for choosing a company is “compatibility with the person in charge”, followed by “housing performance” such as high airtightness and energy saving

Japan’s largest real estate and housing information site operated by LIFULL Co., Ltd. (LIFULL, Head Office: Chiyoda-ku, Tokyo, President: Takashi Inoue, Tokyo Stock Exchange Prime: 2120), which is working to solve social issues through business. LIFULL HOME’S conducted a survey of 500 people who had built a custom-built home within the past three years, and compiled the keys to a satisfying home.
With the impact of the depreciation of the yen and rising prices on people’s lives and growing awareness of natural disasters, it seems that the way people build their dream homes is also changing. [Image 1 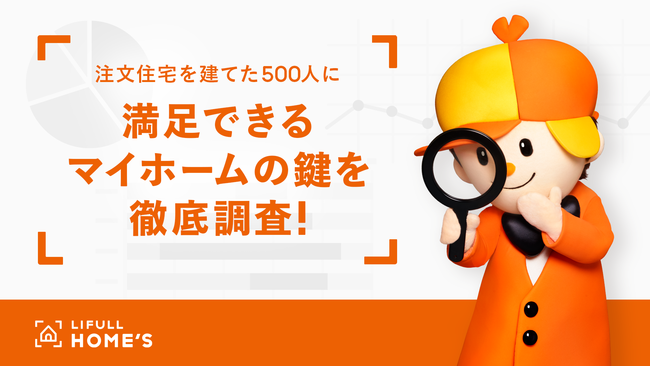 The key to collecting information on custom homes is to organize the conditions in advance! A survey of 500 seniors who bought land and built a house
https://www.homes.co.jp/cont/data/data_00132/
What kind of custom house did you build? What I was particular about and what I gave up for a highly satisfying house
https://www.homes.co.jp/cont/data/data_00133/
[Table 3: https://prtimes.jp/data/corp/33058/table/266_1_ff275a0a344a8b3bfc722c0a740d560d.jpg ]

tendency to focus on performance. “Compatibility with the person in charge” was the number one decisive factor in choosing a company, and “housing performance” was second.
From the time you decide to build a custom home to the time your dream home is built, the important thing is which construction company to choose. In the end, the most common answer for choosing a company was “compatibility with the person in charge” (41.4%). 2nd place was followed by “house performance (high airtightness, high heat insulation, energy saving)” (39.7%) by a small margin. A particularly noteworthy point is the second place, housing performance (high airtightness, high heat insulation, energy saving). In addition to the comfort of life, the price of resources and energy is rising, and environmental awareness is increasing. It is thought that the number of people who consider efficiency and the environment is increasing. In addition, in fiscal 2022, there will be deductions and subsidies according to the energy-saving performance of homes, such as housing loan deductions and children’s future housing support projects, so it is assumed that it will be easier for people who place importance on cost to adopt.
It should be noted that from October 2022, preferential treatment for energy-saving housing is accelerating, such as the addition of a system [Flat 35] (ZEH) that reduces the borrowing interest rate for a certain period of time for ZEH-level housing. .
[Image 2 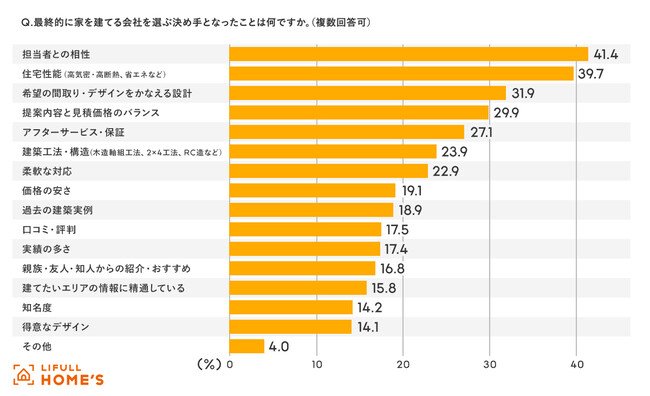 Arranging conditions in advance is the key! What you should do before contacting the company is to organize your desired conditions and estimate costs
When asked about things that should be done “before contacting a house building company or real estate company”, 46.7% said, “Organize desired conditions” and “Estimate the cost to purchase a house” (46.7%). 40.7%) was a large number.
From the actual purchaser, “I didn’t do much homework about building a house, so the house was built according to the proposal of the person in charge. It’s not about the size or the design… It would have been better if we had studied more on our own before starting to build a house.” There was advice such as “You should do it.” [Image 3 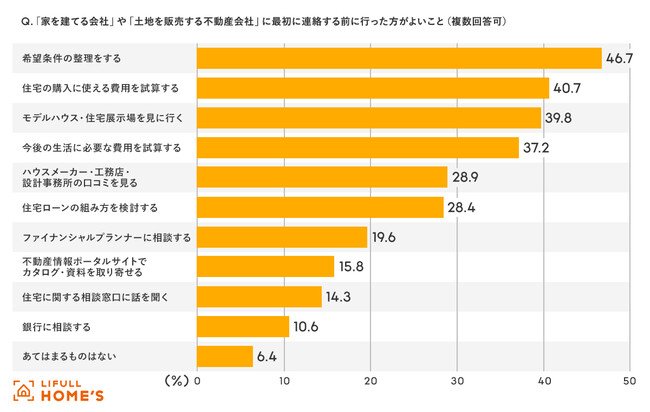 Compare companies to find out! The number of model house tours is “4 to 5”, and the number of quotation requests is “2 to 3 companies”. [Image 4 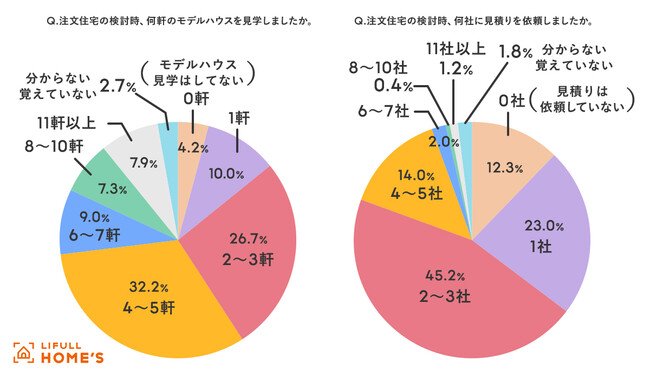 The most common answer for the number of model house visits was “4 to 5 houses” (32.2%). On the other hand, 45.2% of the respondents who requested estimates were the most from “2 to 3 companies”. Since the number of visits to model homes is higher than the number of requests for estimates, it can be seen that model homes were used as a basis for making estimates and considering plans. 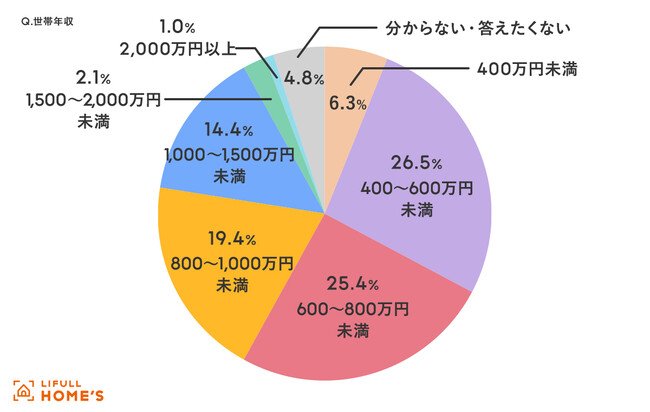 Among buyers of custom-built homes, those with the highest annual income in the volume zone accounted for 4 to 6 million yen (26.5%). Next, less than 6 million to 8 million yen was “25.4%”. About 60% of the purchasers paid less than 8 million yen.

[Table 4: https://prtimes.jp/data/corp/33058/table/266_2_bed802ad20c873e509c1ddb622189ab4.jpg ]
Cheapness and satisfaction are inversely proportional! ? About 70% of the respondents paid more than their expected budget, and those who placed the lowest price on the lowest level of satisfaction. More than 80% of those who built custom homes answered that they were “satisfied.” However, those who chose the company because of the “low price” were less satisfied with the houses they built. When choosing a company, it seems that if you choose only for cheapness, you will regret it after you start living. In addition, about 70% of the people said that the actual purchase amount was higher than the expected budget. Many people tend to end up with more than their budget, so it’s important to prioritize to keep costs from blowing up.
[Image 6

Also, among those who answered that they were higher than their budget, the largest increase was less than 1 million to 3 million yen. In addition, the most common points that these people devised to reduce the budget were “simplifying the shape of the house”, followed by “reducing unnecessary equipment”. It is important to make choices while facing the budget and identifying the points that are really necessary and the points that can be compromised.
[Image 7

Things related to money, such as the use of “taxes/subsidies” and “mortgage”, were ranked high
The first place that I was glad I did was “Taxes, subsidies, etc. were used properly” (32.9%), followed by “I properly conveyed my opinion to the implementation company” (30.7%), “To myself I made a suitable mortgage” (29.5%), and items related to money ranked first and third. It seems that it is necessary to make good use of subsidies and mortgages because custom homes tend to be more expensive than expected budgets.
[Image 8 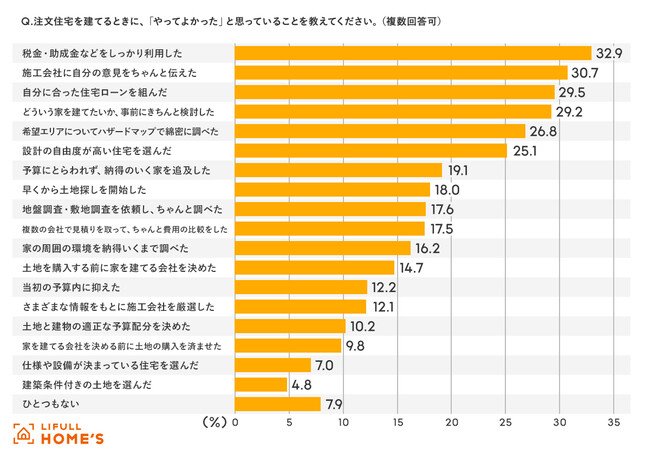 Image after living is important! The points I was particular about were “floor layout”, “life line”, and “storage”.
The most important point in building a custom-built house was “floor layout”, which was the highest at 42.1%. The next most popular items were “life line” (35.7%) and “storage” (30.8%), indicating that they were particular about areas closely related to their daily lives. [Image 9 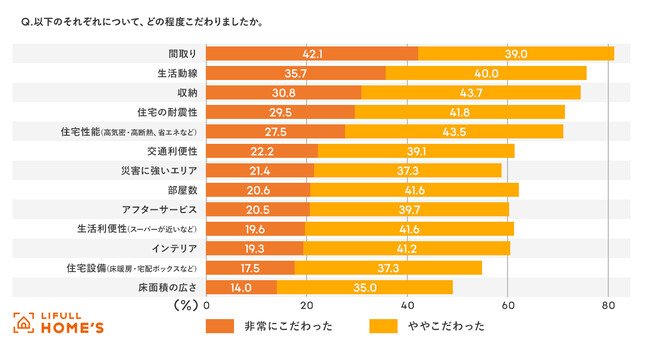 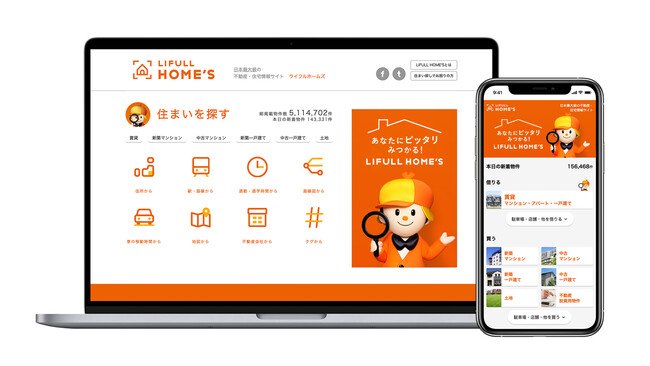 LIFULL HOME’S is a comprehensive real estate and housing information service that helps people find a simple and convenient home based on the concept of “encounter the life you want.”
We will expand various functions and information so that it is easier to find properties and find information about housing, and to make it easier to consider. We will continue to work closely with users to help them find their ideal home.

[About LIFULL Co., Ltd.] (TSE Prime: 2120, URL: https://lifull.com/) LIFULL’s corporate message is “Make every life FULL.” We aim to solve, through our business, social issues that hinder peace of mind and joy, from the issues faced by individuals to the issues of the world beyond them. It’s a social enterprise.
Currently, the group provides services in 63 countries around the world, including the main service “LIFULL HOME’S”, a real estate and housing information site, “LIFULL regional revitalization” centered on the revitalization of vacant houses, and the lifestyle of seniors. We are expanding our business in various fields with the aim of realizing a society where each person’s life is filled with peace of mind and joy, such as LIFULL Nursing Care.