“AMP Media Analyzer” is equipped with “AMP Core,” which was developed by integrating the group of performance-based advertising support systems that we have worked on so far, and integrating the accumulated data for 10 years, realizing the maximum effect of digital
advertising. Ad optimization system. Through media algorithm analysis and behavior causal visioning system that uses all Adways data, AI detects the optimal operation method and improves advertising effectiveness. Advertisement distribution can be controlled in line with marketing strategies.
This time, as the second release of the “AMP Media Analyzer” series, we have released “MediaAnalyzer 4M”, which is equipped with many functions specialized for Facebook and Instagram advertisements provided by Meta.
“Media Analyzer 4M” automatically checks whether ad campaign settings are properly set according to best practices. Next, we analyzed the media algorithm by action causal visioning, and clarified the causal relationship between the media algorithm and advertising effect from various angles based on the advertisement distribution data
accumulated over 10 years. Furthermore, by executing optimization actions according to the situation based on the elucidated causal relationship, it leads to improvement of advertising effectiveness. At our company, rather than assigning advanced operational know-how to an individual, we have formed a “highly mechanized” mechanization team that utilizes the “AMP Media Analyzer” series to achieve systematic reproducibility. With a series of schemes, anyone can operate advertisements at a high level, regardless of the genre of the project.
■ Unique functions that match media characteristics
The MediaAnalyzer series is equipped with many unique functions that can only be developed by our company, which can separate and analyze the entanglement of media algorithms.
“Media Analyzer 4M” is equipped with a unique function “Creative Sustainer System”, AI analyzes demographic data of creative
granularity and data for each distribution side, predicts CPA (*) in the future, By adjusting your delivery settings and daily budgets, you can reduce CPA spikes and increase creative sustainability.
[Image 2 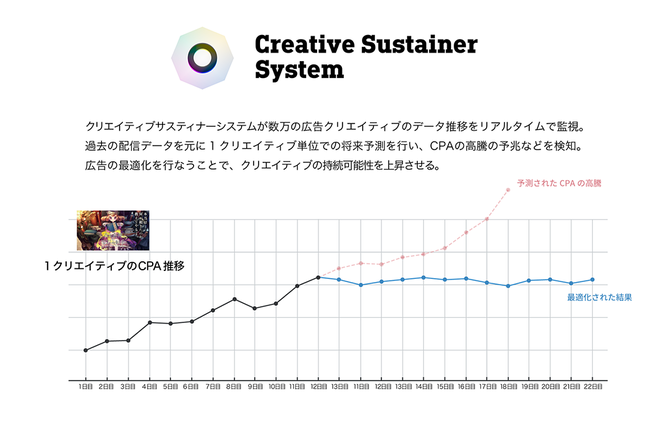 Adways will continue to release digital advertising maximization products using AMP Core.
In the AMP series, we combine the high level of skill and creativity of people with advanced technology to create essential advertising value. We will continue to achieve sustainable growth.
The Adways Group will flexibly respond to market needs, strive to further expand our services, and develop efficient and practical advertising marketing services in countries around the world. * CPA (Cost Per Action)
Earning unit price. The cost per person to acquire customers and results. □■□ About Adways Inc. https://www.adways.net/
Established in 2001. Listed on the Tokyo Stock Exchange Mothers in 2006 and on the First Section of the Tokyo Stock Exchange in 2020. Moved to the Tokyo Stock Exchange Prime Market in 2022. Starting with the operation of Japan’s largest affiliate services “JANet” and “Smart-C”, we are developing an advertisement distribution service for smartphones “AppDriver” and a fully automated marketing platform “UNICORN”. In addition, we are developing a variety of businesses such as planning, development, and management of applications and content. Starting with Japan, we are also expanding overseas to countries around the world, mainly in Asia.
Details about this release:
https://prtimes.jp/main/html/rd/p/000000110.000033008.html