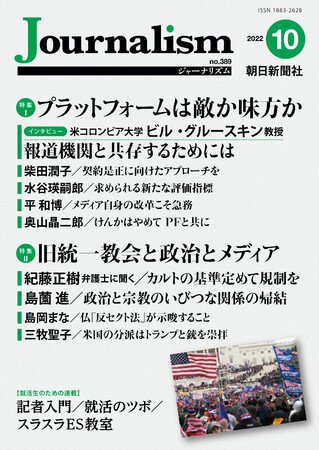 The threat to the digitization of newspapers is the emergence of platformers such as Google and Facebook. Advertisement income is flowing into the overwhelming number of users, and the backbone of the newspaper company is shaking. How should we deal with those giants? In the opening interview, Professor Bill Gruskin of Columbia University in the United States talks in detail about the actual situation in Australia where the platformer’s mechanism to fund the news media has been realized based on field research.
Junko Shibata, a professor of law at Kagawa University, believes that under the control of platformers, if news organizations only play the role of content suppliers, they may be excluded from the market for both readers and advertisements. cannot be denied. Eijiro Mizutani, an associate professor in the Faculty of Sociology at Kansai University, said that the function of the news media, which serves the public’s right to know, is declining due to the attention economy, which tends to be influenced by PV and clicks. I am afraid that I might go. Special Feature II is “The Old Unification Church, Politics and the Media”. In an interview, Masaki Kito, a lawyer who worked to help the victims of the former Unification Church, said about future efforts, “We should set up something like a nuclear accident investigation committee in the Diet to think about countermeasures. I would like to work in such a way,” he emphasizes. Susumu Shimazono, a professor emeritus at the University of Tokyo, pointed out that the relationship between the former Unification Church and the Liberal Democratic Party, which led to the shooting of former Prime Minister Shinzo Abe, was “the result of a distorted relationship between politics and religion.” It raises the question, ‘How much critical coverage has been done by the media?’
“Monthly Journalism” was launched in October 2008. Through the perspective of journalism, we will face various social issues. The list price is 815 yen (including tax). You can order it at bookstores, online bookstores, and ASA (Asahi Shimbun Sales Office) nationwide. [Asahi Shimbun Journalist School]
Established in 2006. Focusing on training for young reporters in their first, second, and third years with the company, we also provide mid-career and veteran reporters with a “place to learn.” Thematic trainings such as local government finance and medical care are also held, and other media are invited to participate.
◆Official site https://jschool.asahi.com/
◆ Twitter: http://twitter.com/asahi_jschool
-inquiry-
Asahi Shimbun Journalist School
TEL 03-3545-0131 (representative)
Details about this release:
https://prtimes.jp/main/html/rd/p/000001389.000009214.html