George & Sean Co., Ltd. (headquartered in Tokyo), which provides AI-based healthcare services such as early detection of elderly dementia and mild cognitive impairment (MCI), which is an early stage of dementia, Shibuya Ward, Representative: Ken Inoue / G&S) is a medical corporation that has been providing treatment and care for dementia for many years. We have concluded an advisory contract with Dr. Ken Nagata, who is the director of the Dementia Disease Medical Center and a neurologist at the same hospital.
Under this advisory agreement, G&S will accelerate research related to dementia in the elderly and the development of healthcare services, aiming to build a super-aging society in which the elderly can safely and safely extend their healthy life expectancy.
[Image

Background of Advisory Agreement
Aging is a social phenomenon that is progressing in Japan, and a super-aging society is a major issue not only for the healthcare industry but also for the country as a whole. According to the “Population Estimates” of the Statistics Bureau of the Ministry of Internal Affairs and Communications, the elderly population will reach 36.4 million in 2021, an increase of 230,000 from 2020, and the elderly population rate in 2021 will be 29.1%, 0.4% from 2020. Increased*1.
The elderly population is increasing year by year, and one of the reasons for this is the extension of life expectancy. G&S believes that extending healthy life expectancy, rather than just extending life expectancy, will enrich people’s lives. In addition, “dementia”, which is mainly caused by aging, is one of the diseases that pose a threat to the elderly generation. The prevalence of dementia in Japan is the highest among OECD member countries (35 advanced countries), and was 2.3% of the population in 2017, but is estimated to rise to 3.8% in 2037*2. The Cabinet Office’s 2017 White Paper on the Elderly announced that by 2025, one in five elderly people will develop dementia*3.
In this way, “dementia” has become an inseparable medical condition in a super-aging society, and there is an urgent need to construct multifaceted intervention methods such as predictive detection and onset suppression.
Dr. Ken Osada, who has been researching dementia for many years and has continued to treat and care for many patients and their families, has been appointed as an advisor to G&S. We will rapidly develop multi-faceted healthcare services related to dementia in the elderly, and aim to build a super-aging society in which the elderly can extend their healthy life expectancy in a safe and secure manner.
*1 2021 Population Estimates, Statistics Bureau, Ministry of Internal Affairs and Communications
https://www.stat.go.jp/data/jinsui/2021np/index.html
*2 2017 OECD “Health at a Glance”
https://www.oecd.org/japan/Health-at-a-Glance-2017-Key-Findings-JAPAN-in%20Japanese.pdf *3 Cabinet Office “2017 White Paper on the Elderly”
https://www8.cao.go.jp/kourei/whitepaper/w-2017/zenbun/29pdf_index.html Medical Corporation Ryokuseikai Yokohama General Hospital
Director, Yokohama Dementia Medical Center
Dr. Ken Nagata’s Advisor Comment
I have recently been appointed as an advisor to a venture company, George & Shawn Co., Ltd. I have been involved in medical care and clinical research for dementia and stroke. I feel the importance of medical care. Japan is facing a super-aging society that is rarely seen in the world, and dementia is not only a medical problem, but also a social issue. I will apply the experience and knowledge I have cultivated in the medical field to the technology and social activities of the future. I will do my best to build such a society where you can spend your own lifestyle.
profile
Ken Nagata, Doctor
Director, Clinical Research Center, Yokohama General Hospital Graduated from Hirosaki University School of Medicine
After working at Mihara Memorial Hospital, Institute of
Cerebrovascular Medicine, University of Colorado Health Science Center, Akita Prefectural Cerebrovascular Research Center, he assumed his current position in April 2016.
From December 2020, he also serves as the director of the Yokohama City Dementia Disease Medical Center.
Specializes in neurology (stroke, dementia), neuropsychology, diagnostic imaging Specialist of the Japanese Society of Neurology, Specialist of the Japanese Society for Dementia, Specialist of the Japan Stroke Society, Specialist of the Japanese Society of Clinical Neurophysiology George & Shawn Co., Ltd.
With the vision of “Let’s create a little kinder world.” will be used to develop dementia/MCI early detection services and other solutions to various social issues.
Many of the employees are working on side jobs, embodying a new style of entrepreneurship, and are often exposed to the media. He has exhibited overseas and actively participated in pitch contests, winning numerous awards.
George and Sean will continue to develop its business so that the people living in this world can become a little kinder.
vinegar.
Main business development
・biblle Beacon location information monitoring tag/app
・Facility 360° (Shisetsu San Rokumaru) Positional information monitoring and lifestyle management system for facilities for the elderly
・ Cognivida AI service for estimating brain cognitive functions using lifestyle data
・hulali                                 ・Hawaii travel app certified by the “Hawaii Tourism Board”
・ KYOUDOKO Local community app jointly developed with Odakyu Electric Railway Co., Ltd.
Representative: Ken Inoue
Head office location: 6-23-4 Jingumae, Shibuya-ku, Tokyo 151-0001, Kuwano Building 2F
Phone number (representative): 03-3405-7230
Website: https://george-shaun.com/ 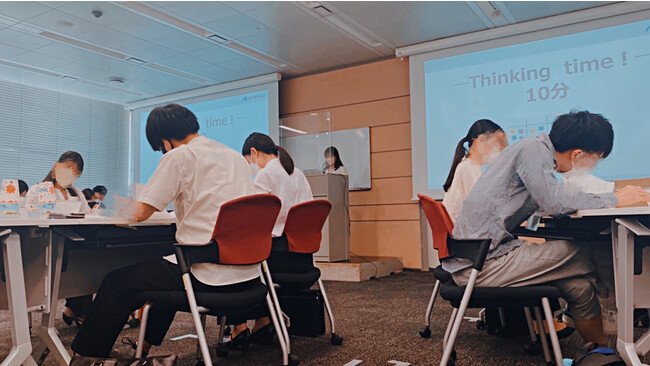