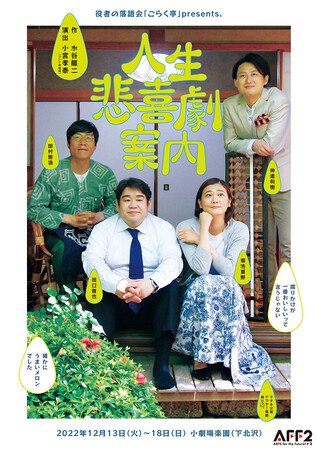 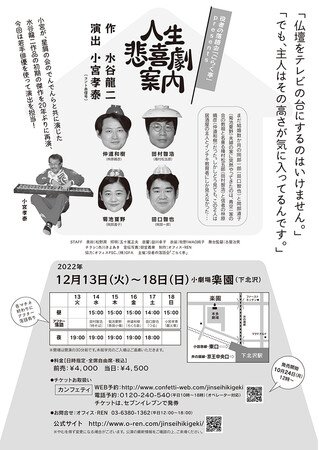 Produced by Takayasu Komiya Vol.10 “Guide to Tragedy and Comedy of Life” 2022 Takayasu Komiya, who made his debut as a comedy red light, shifted his focus to acting in his 30s and has been mainly active on stage. This “Jinsei Tragicomedy Guide” was written and directed by playwright Ryuji Mizutani and premiered in 1990 as the fourth performance produced by Komiya himself. Den Den is listed as a co-star. One of Mizutani’s early masterpieces, this performance would later develop into Stardust Society, where Mizutani served as an artist.
Komiya will be in charge of planning and directing the performance in December 2022 as a training for promising young actors.
In fact, 20 years ago, Komiya directed a performance by a young member of the Hoshikuzu no Kai, so this will be his second chance at this play. It is also an attempt to pass on the method acting that Komiya learned from his time at the theater company Theater Echo Training School and the mental, technical and physical arts of experiential comedy.
By the way, since 2007, Komiya has also been a special lecturer in acting at Nihon University College of Art, Department of Film. In other words, Komiya has become a person of the generation to convey. [Synopsis]
The era is Tokyo in the 1990s when the era is about to change from Showa to Heisei.
Ichiro Okabe, who works as a real estate agent, had just married Michiko three months ago.
Ichiro, who is a bit of an otaku, and Michiko, who is an easy-going couple, have one problem.
It is that Michiko had joined a certain religious group.
Although it was a modest group that gathered at an izakaya, Michiko’s beliefs were firm and Ichiro had a hard time.
Moreover, it was involved in the eviction problem of the pub where the meeting place was…
What is a husband and wife, what is the bond between people, and is an excellent work of human comedy that cuts into the problems of the weak in society.
Since it depicts adult human relationships, it is aimed mainly at audiences in their 30s and above, but it also has a universality that transcends generations, including religious issues, so I would like the younger generation to see it as well.
Performance overview
Actor’s rakugo show “Goraku-tei” “Life Tragicomedy Guide”
Performance period: December 13, 2022 (Tuesday) to December 18, 2022 (Sunday) Venue: Small Theater Rakuen (2-10-18 Kitazawa, Setagaya-ku, Tokyo, Towa Shimokitazawa High Town B Bldg. 1F)
■Performers
Tomoya Taguchi
Kazuki Nakamichi
Tomoya Taguchi
Kikuchi Natsuno
■ Staff
Written by Ryuji Mizutani
Directed by: Takayasu Komiya (comte red light)
Art Design: Jun Matsuno
Lighting: Masao Igarashi
Sound: Sachiko Maskawa
Costume: Junko Makino IWAO
Stage Director: Haruo Furuya
Flyer design: Kiyoaki Ichikawa
Promotional photo: Yoshinori Mido
Production: Office/REN
Cooperation: Office PSC
Sponsored by: Actors’ rakugo show “Goraku-tei”
■ Performance schedule
December 13 (Tue) 19:00
December 14 (Wed) 15:00/19:00
December 15 (Thursday) 15:00/19:00
December 16 (Friday) 15:00/19:00
December 17 (Sat) 14:00/18:00
Sunday, December 18, 15:00
*Doors open 30 minutes before the start of the performance
★There is after-rakugo at the end of each matinee!
■ Ticket price
Advance: 4,000 yen
On the day: 4,500 yen
(all seats free, tax included)
*Please refrain from entering preschool children. 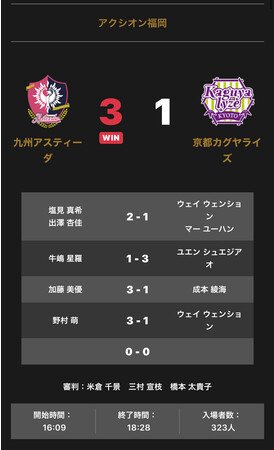