During the period from October 27, 2022 to November 9, 2022, the Japanese horror novel “Ring” and its movie adaptation in the asymmetrical multiplayer game “Dead by Daylight Mobile” for
smartphones distributed by NetEase Games. We will hold a collaboration event with the vengeful spirit “Sadako” that appears in the first work “Ring”.
[Image 1 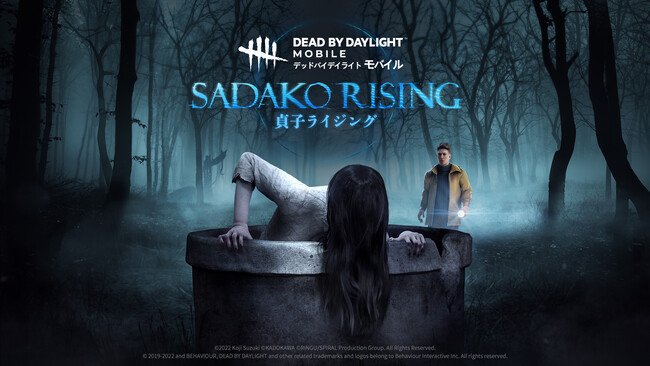 Sadako participates in “Dead by Daylight Mobile”!
Sadako (Sadako Yamamura) is a live-action film based on Koji Suzuki’s novel “Ring” (1991), which depicts the horror of a “cursed video” that “those who watch it will surely die after a certain period of time.” (1998).

[Video 3: https://prtimes.jp/api/movieim.php?url=www.youtube.com/watch?v=96zwuCJIqDU] Sadako’s curse has finally spread to “Dead by Daylight Mobile”. Sadako joins as a new killer, giving survivors even more fear.
As a killer, Sadako can move in stealth mode and can instantly approach the survivors’ locations. You can also teleport through the location of the TV set on the map, making it possible to walk around like a vengeful spirit. The addition of Sadako will bring a new level of strategy to Dead by Daylight Mobile.
And Yoichi Asakawa, also from the “Ring” series, will be added to the survivors. A survivable survivor with special perks that support injured allies, hinder the Killer, and increase movement speed to make it easier to escape from the Killer. Use that ability to escape from Sadako’s curse!
Sadako and Yoichi Asakawa’s exclusive costumes “Sadako: Flower of Eternal Sleep” and “Yoichi Asakawa: Supernatural Incident
Investigator” will appear! Among them, Sadako’s exclusive costume “Flower of Eternal Sleep” allows you to enjoy a memento mori production that is different from the usual Sadako.
[Image 2 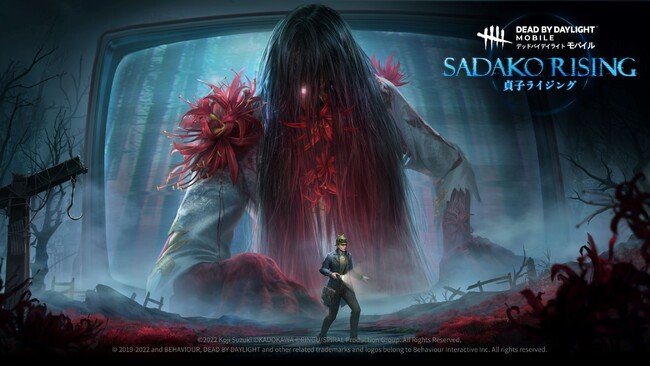 Spread the cursed video and get collaboration rewards!
Due to the appearance of Sadako, it is expected that many players will be cursed within “Dead by Daylight Mobile”. It seems that 700,000 players who have already participated in the event have been cursed!
[Video 4: https://prtimes.jp/api/movieim.php?url=www.youtube.com/watch?v=xf1FSb3UCgY] Sadako’s curse can be lifted by spreading the curse video to others. By investigating the videotape on the official website and
participating in the H5 event to spread the cursed videotape, you will receive further collaboration information as a thank you from Sadako, as well as the Sadako icon, entity stone and video diffusion event limited to the official website. You can receive gifts from Sadako such as the Sadako collaboration jacket.
In addition, there are many collaboration limited time events in the game. You will be rewarded. Please feel free to join us. 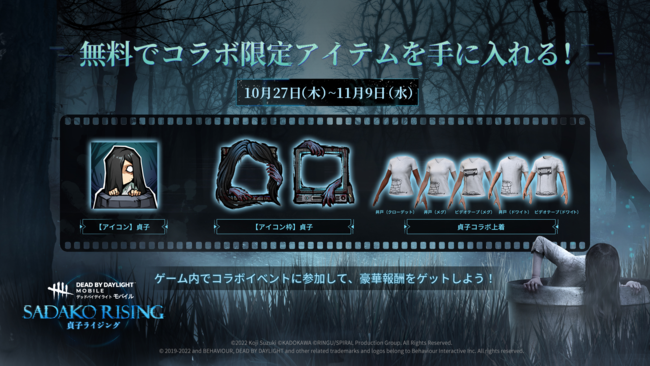 ■ About the smartphone version of “Dead by daylight Mobile”
“Dead by Daylight” is a 4vs1 asymmetric battle survival horror game developed by Canadian development studio Behavior Interactive Inc. Players are divided into one murderer (killer) and four survivors (survivors) and fight to the death. The Killer will give you the excitement of hunting down Survivors, while Survivors will enjoy the ultimate tension in extreme conditions. The real thrill is that you can enjoy a life-threatening hide-and-seek game.
The smartphone version is operated jointly by NetEase Games and Behavior Interactive Inc. and released in some parts of Asia, including Japan. It faithfully reproduces the realistic gaming experience of “DbD”. Detailed map environment graphics, killers and survivors are expressed in high definition, strategic elements and localization are also focused, you can combine more than 120 skill parks and use more than 600 items. increase. You can also enjoy coordinating with fashion that incorporates the characteristics of the Asian region.
Collaboration special site: https://www.dbdmobile.jp/rising-pre/ Video tape diffusion event: https://www.dbdmobile-sea.com/jp/sns/sadakotape/ Official site: https://www.dbdmobile.jp/pre-register/
Official Twitter: https://twitter.com/DbDMobile_JP
Official LINE: https://page.line.me/497dhbpb?openQrModal=true About “Dead by Daylight(TM) Mobile”
Dead by Daylight(TM) Mobile is based on the IP of the popular asymmetric multiplayer horror game from Behavior(TM) Interactive, and is developed to provide an intuitive control and meticulously crafted experience. It’s a smartphone game. In Dead by Daylight Mobile, players are both the hunter and the hunted in a terrifying map reminiscent of classic horror games. Since its launch in April 2020, it has been downloaded more than 28 million times worldwide through both the App Store and Google Play stores. For more information, please visit https://mobile.deadbydaylight.com.
About Netease Games:
NetEase Games is an online game division established by NetEase, Inc. (NASDAQ: NTES / HKEX: 9999). We develop and operate popular smartphone and PC games in overseas markets, including mainland China and Japan. As one of the world’s largest game makers of high quality online game content, NetEase Games supports the growth of studios around the world, increasing its profile and presence in the process. In order to improve our own development capabilities and world-class research capabilities, we have partnered with world-famous game makers such as Blizzard Entertainment and Mojang AB (a subsidiary of Microsoft) to develop popular global online games. I am also involved in the operation of
About Behavior(TM) Interactive
Founded in 1992, Behavior(TM) Interactive is Canada’s largest indie game developer and publisher. The original IP title “Dead by Daylight” released by Behavior (TM) Interactive, which has more than 900 official employees, has become very popular, and the number of players has exceeded 50 million worldwide. rice field. In addition, Behavior holds co-development rights to some of the industry’s most
recognizable game titles (e.g. Assassin’s Creed, Gears 5, Tony Hawk Pro Skater 1+2) We were able to build a wonderful award-winning culture. Behavior has been awarded Deloitte Canada’s Fast 15 and Best Companies, and was also named 2021 by GamesIndustry.biz as “Best Place to Work”. As a forward-thinking development studio, Behavior also focuses on career planning and professional talent development in the game industry. Behavior has built relationships with many famous companies around the world, such as Microsoft, Nintendo, and Sony, as business partners. More information can be found at bhvr.com. About KADOKAWA Group
As a comprehensive entertainment company, we are developing a wide range of businesses such as publishing, video, games, web services, education, MD, and inbound related. By promoting digital
transformation, including ABW (Activity Based Working), we have implemented a “global media mix” strategy centered on the stable creation and global expansion of IP (Intellectual Property). (C) 2019-2022 BEHAVIOUR, DEAD BY DAYLIGHT and other related trademarks and logos belong to Behavior Interactive Inc. All rights reserved. (C) 2022 Koji Suzuki (C) KADOKAWA (C) RINGU/SPIRAL Production Group. 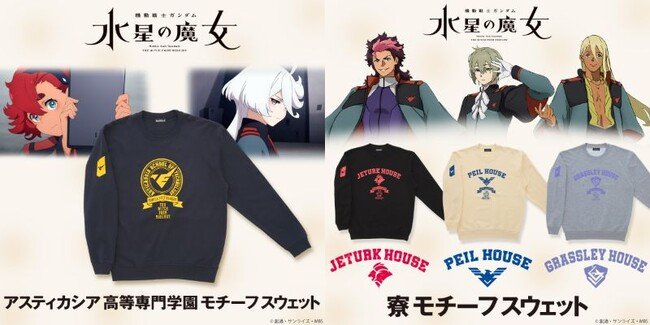