D.L.E. Co., Ltd.
DLE Co., Ltd. of “Secret Society Hawk’s Claw” launches Webtoon Business Office and starts IP development for Webtoon for the world. The 1st death game “Jigoku Matsuri” is off to the top of the popularity ranking of DMM Books! We are planning to release 10 works such as horror, battle action, and BL by the end of the year! !
DEL Co., Ltd. (Headquarters: Chiyoda-ku, Tokyo, Representative Director: Naoto Kohama (hereinafter DLE) will enter the vertical reading color manga webtoon business.
In this project, Senior Producer Katsuya Inoue, who developed “Shellfish Staff” and created a hit through the airing of TOHO Cinemas’ intermission and morning information program “ZIP! I will assume the position of business manager. In the Webtoon Business Office, we have gathered more than 30 creators across genres such as manga, illustration, animation, live-action drama, etc., and we will create 10 original works within the year, from death games, revenge, horror, to romance, BL, and adultery. We plan to release it. As the first step, the webtoon work “Jigoku Matsuri” produced with the DMM Group’s e-book original content studio “GIGATOOON Studio (Representative Director: Junichiro Ota, Headquarters: Minato-ku, Tokyo)” will be released on September 15th at “DMM Books. “It is serialized in. The serialization started on September 15th, and it got off to a good start, ranking first in the popularity ranking (vertical reading full-color comic category as of October 3, 2022).
In the future, it will be translated into Korean as well, such as “LEZHIN COMICS (https://www.lezhin.com/ko)”, “BOMTOON
(https://www.bomtoon.com)” and “Delitoon (https://www.delitoon. com)” will also be delivered. Similarly, “DMM Books” is planning to start the horror work “Shirazugiri” by the end of the year.
In addition, through the formation of a production committee involving Internet development, which is DLE’s specialty, and terrestrial TV stations, etc., we are strongly promoting the spread of exposure and the development of secondary use business, which are the issues of Webtoon.
Please look forward to DLE’s Webtoon business office, which will strongly promote the original IP business for the world by making full use of the creator network and web diffusion / production committee! ! [Webtoon work information by DLE Webtoon business office]
“Hell Festival”
This place is Hell… It is said that those who killed in this world will be dropped here. Sinners are repeatedly tortured by demons and regenerated, and are tormented forever. In hell where such daily life continues, the big event that the demons are looking forward to is the Jigoku Matsuri! ! Heinous sinners who are being tortured in hell compete in a death game aiming for a reward that allows them to reincarnate and escape from hell if they become the winner! While many famous villains in history, such as Nobunaga Oda and Elizabeth Bathory, the bloody lady who became the origin of vampires, also participate, the main character, Kouta Saito, who is an ordinary person, holds a hell festival for the sake of the family he left behind in this world. Determined to win…!
[Image 1 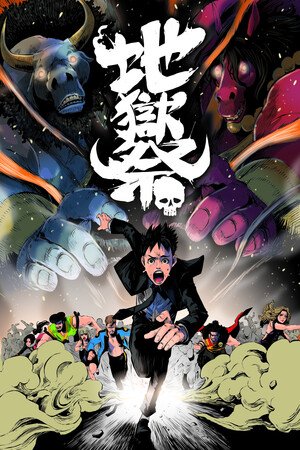 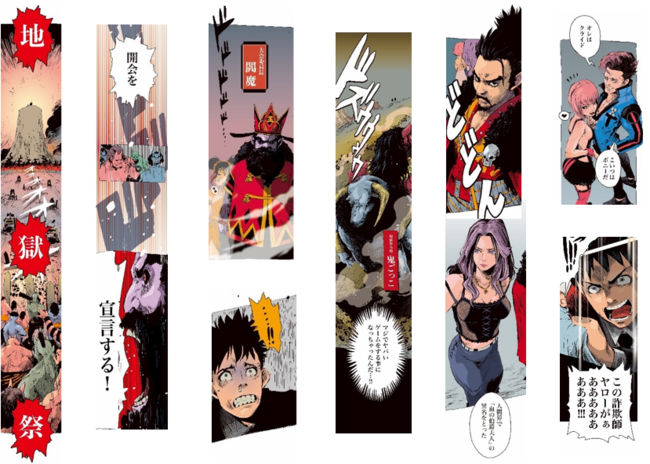 “Shiranui Mist”
A company’s recreational tour bus goes down a mountain road, but it gets stuck because of the fog. The fog grew thicker and thicker, surrounding the bus as if it had its own will…and then, out of the fog, something I had never seen before attacked the bus! Can young employees Keisuke and his friends escape the evil fog and return? [Image 3 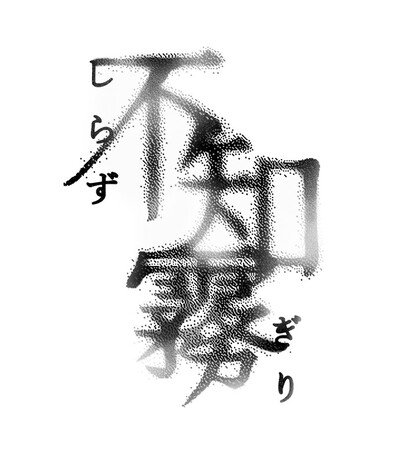 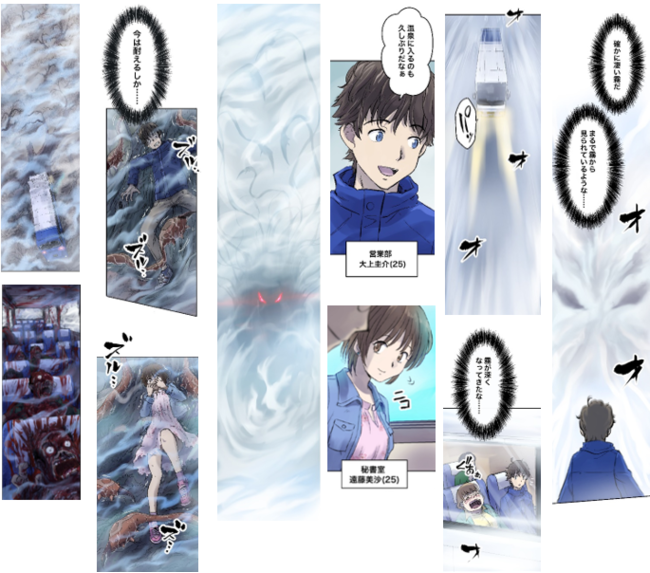 “Revenge Theater”
Killing alone is lukewarm, but “same way of killing” will cause many times more pain to the bad guys!
A philosophical revenge agency show by movie theater projectionist Hasumi will start! !
[Image 5 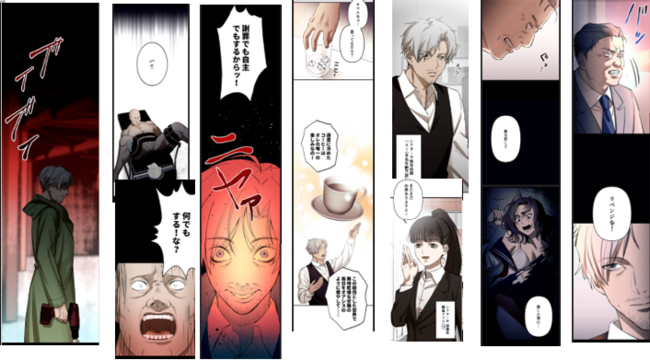 “Pocket Nippon Gin”
The event “Pocket Nippon Gin Fight” is being held somewhere in space. It’s a battle where Japanese people owned by aliens fight while customizing each part like a toy! ! Utsutsu, a high school girl who was kidnapped and decided to participate in the war against her will, will she be able to win and escape from this crazy environment? ? [Image 6 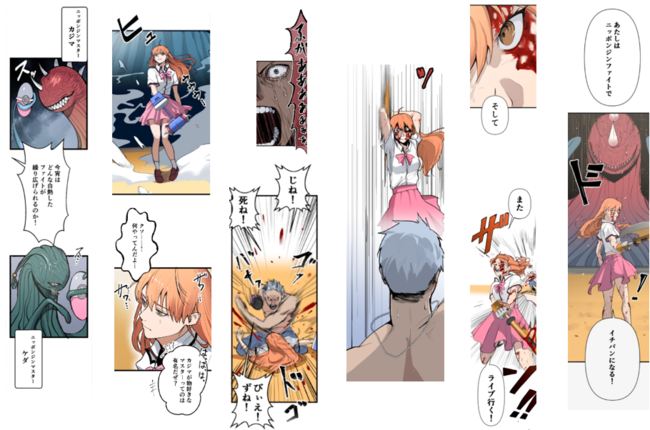 “Magic hand”
A monster battle manga planned by FROGMAN, a creator representing DLE! The legendary demon “Ibaraki Doji” dwells in the hands of Kirin, the main character of Chuunibyou, and begins a fierce battle with Onmyoji who use shikigami.
Rush in! Boy Kirin and Ibaraki Doji’s buddies defeat the enemies one after another! !
[Image 7 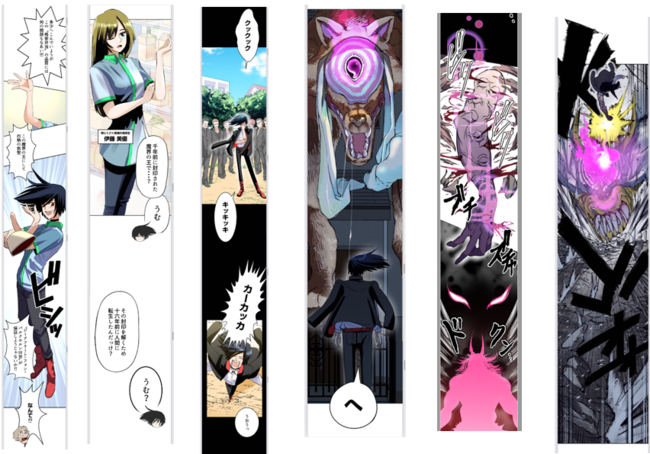 “First Love Revenge Uncle”
Mamoru’s first love is his same-sex best friend in college. Even now, in my dull fifties, I regret not being able to confess to him. One day, Mamoru accidentally slips back in time to his university days, and this time he tries to redo his romance without regrets… Uncle’s sweet and sour pure first love redo story!
[Image 8 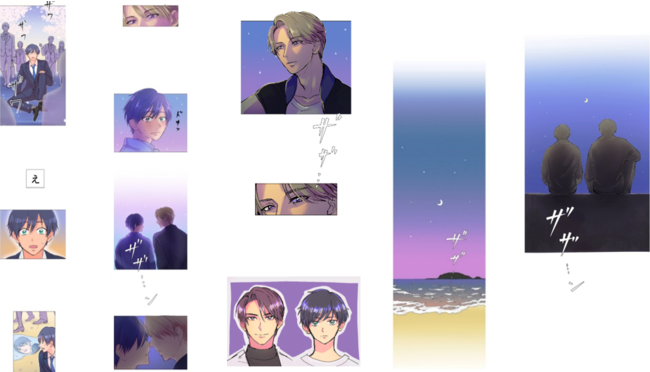 “When I become a host, I am in a pinch because my colleagues are pressing me! ? 』
“I came here because I wanted to be popular with girls!!”
The door that the dull hero opened to become popular was a host club! ! For some reason, the handsome hosts are pressing me, saying, “Hey, you have a cute face.”
Can you dodge the approaches from men and get a popular life with girls? [Image 9 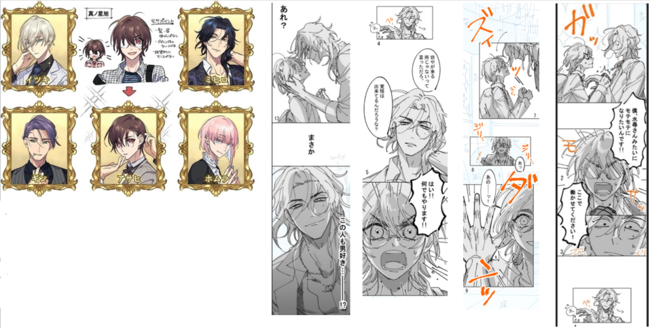 “Actually, I’m having an affair with a pusher”
Misaki, the main character, is living a hellish life because of her husband Takuya’s moral harassment. By chance, he becomes acquainted with Kanata Kayama, Leon’s voice actor, and the two are attracted to each other.
Can they overcome the hurdles and become happy!? ?
[Image 10 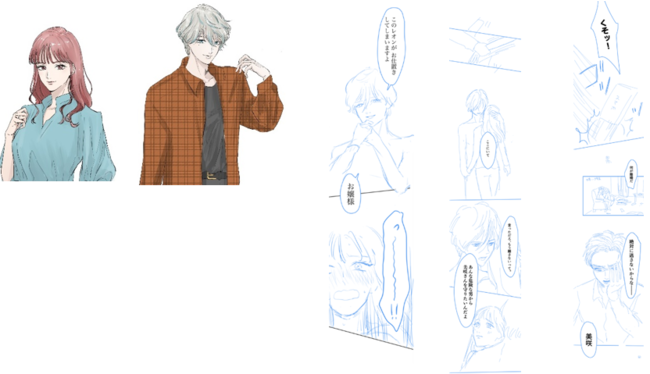 -D.L.E. Co., Ltd. Company Profile-
A comprehensive entertainment company that develops and acquires IP (intellectual property rights such as copyrights and trademark rights) and provides services to a wide range of business areas. In May 2019, it became a consolidated subsidiary of Asahi Broadcasting Group Holdings Co., Ltd., and comprehensively owns entertainment content that Japan is proud of, such as anime characters (secret society hawk claws, panpaka pants, shellfish employees, etc.), regional
revitalization, Actively promote overseas expansion.
By providing marketing services such as video advertisements, planning and development of smartphone applications, and video content production such as movies, TV, and Internet media, etc., we have rapidly provided services that keep up with the times, and moved to the TSE Mothers in 2014 and the First Section of the TSE in 2016. Listed.
* About “GIGATOON Studio” *
“GIGATOON Studio”, which jointly developed the first work of DLEWebtoon Business Office “Hell Festival”, was established in January 2022 to plan and produce e-book original content, including web vertical reading comics. So far, we have distributed seven works in Japan, mainly works for women. and have established a distribution system for overseas manga distribution platforms.