Dentsu Lab Tokyo Administrative Office
Dentsu Lab Tokyo, which solves social issues with technology and ideas, collaborated with musician Fumitake Ezaki and visual design studio WOW to develop an interactive listening experience that connects performers and audiences.
On October 20th (Thursday), a one-night-only fantastic concert will be held on the water of the Tennozu Canal.The audience touches the bubbles created by the live performance, and the 3-layer structure adds a musical performance to the changing tones.

Dentsu Lab Tokyo (Minato-ku, Tokyo), which practices technology-based solutions to social issues and the development of new expressions, has developed an interactive listening experience that connects performers and audiences with visual design studio WOW. On October 20th (Thursday), a limited event WOW 25th Special Anniversary Live Installation “sonus-oleum*; It was performed for the first time at a concert that attracted 319 visitors.
[Image 1 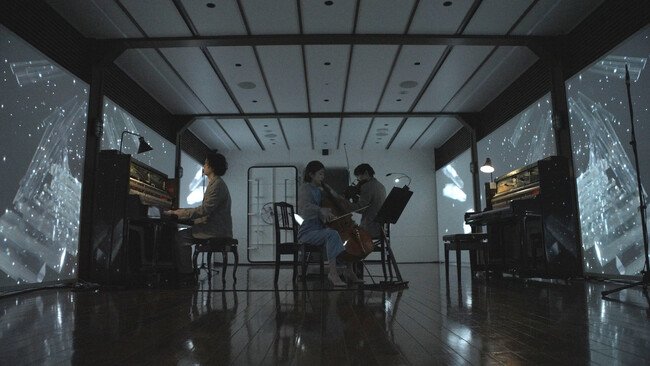 At the concert, the concept of this event, “unlearn,” was expressed by taking advantage of the three-floor structure from the basement to the roof of the venue floating on the Tennozu Canal. On the basement floor, a live performance by Mr. Ezaki and others creates bubbles on the wall, and when the audience touches the bubbles on the ground floor, the sound changes. In addition, the bubbles rise to the roof and are projected as a large wind projection mapping that moves the ship. At the end, the sound that the audience changed on the ground floor was automatically played on the piano again on the basement floor, and Mr. Ezaki and others added improvisational music to match the sound for a live performance. The interactive listening
experience, in which performers and audience reconstructed sound together and returned it as new music, fascinated the audience, and the venue was filled with applause.
Fantastic concert that “unlearns” through 3 floors
Performance by Mr. Ezaki and others and projection mapping of bubbles generated from the keyboard
[Image 2 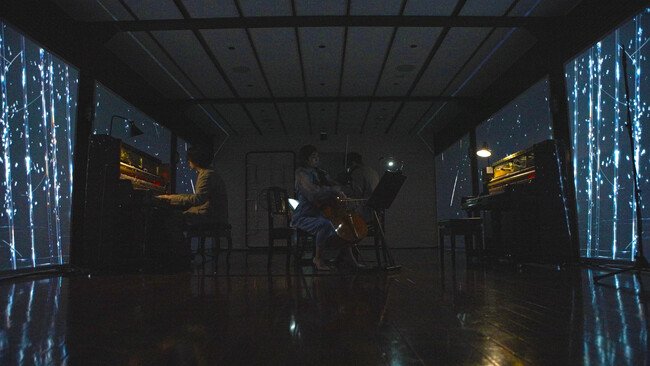 Live performances by Fumitake Ezaki (Pf.), Shuntaro Tsuneda (Vn.), and Sonoko Muraoka (Vc.) will be held on the basement floor of the venue. We projected an interactive projection mapping where bubbles are generated from the piano keyboard. When the sound is high, bubbles come out from the upper hand, and when the sound is low, the bubbles come out from the lower hand.
Changes in sound produced when the audience touches the bubbles [Image 3 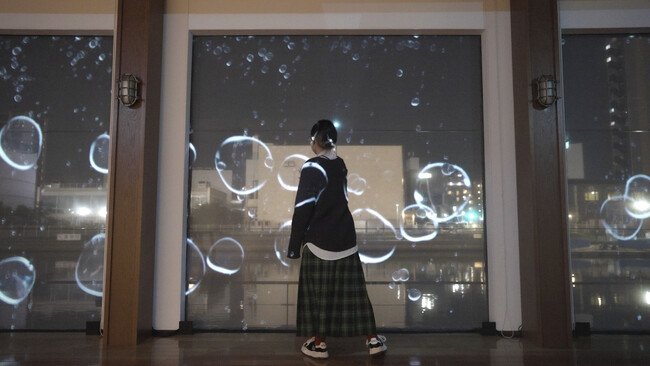 The bubbles created at the concert on the basement floor rise, crossing the floor and appearing on the ground floor. When you touch the bubbles, the bubbles pop and change the sound of the performance. Move the ship with the power of music woven by Mr. Ezaki and the audience [Image 4

The rising bubbles are projected onto the rooftop tent as projection mapping of the air currents that move the ship. The performance by Mr. Ezaki and others and the sounds changed by the audience are mixed to create a fantastic image.
Eventually the music will return to the underground and create new music again [Image 5 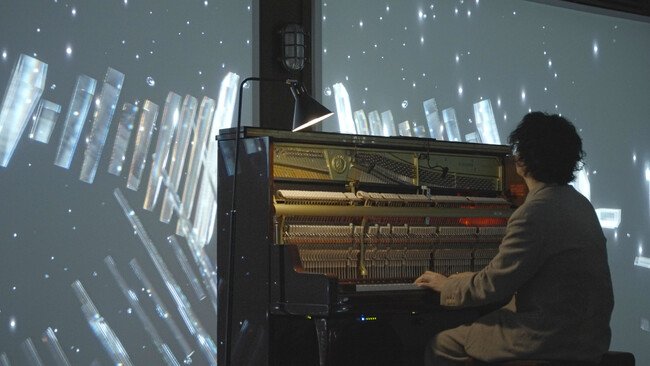 When the audience touches the bubbles on the ground floor, the changed sound returns to the basement, and the piano starts playing
automatically. Mr. Ezaki and others will add sessions accordingly. While enjoying the newness of his performance with a different sound, he was fascinated by his wonderful performance. The audience, including those who were unable to enter the venue, erupted in applause, bringing the venue to a climax.
An interactive production system developed by Dentsu Lab Tokyo and WOW The interactive bubbles are produced by detecting the position of the audience’s hand touching the wall with a laser scanner installed on the wall. Based on the detection position and the position of the bubble, it is determined which bubble has been touched, and the image and sound are changed at the same time. This sound is designed so that it will always be established as music no matter what the audience interacts with. In addition, the changed sound information is transmitted to the basement floor and rooftop, and used for production on each floor.
[Image 6 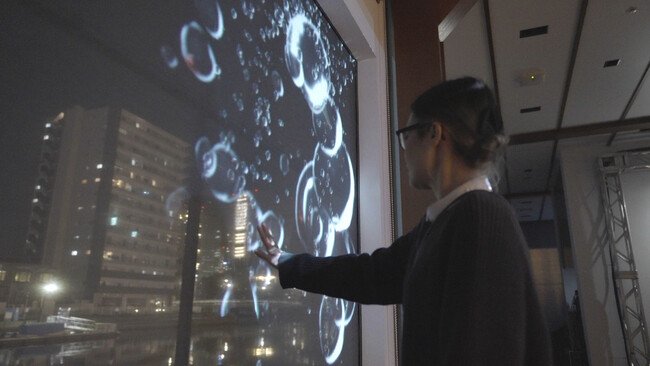 Stakeholder comments
■ WOW Visual / Art Director Hiroshi Takagishi
Originally, it was only planned for Mr. Ezaki’s concert, but after many meetings, we came up with the idea of ​​an interesting
collaboration with us. Since the venue we used this time has a three-layer structure, we imagined how water would evaporate, become clouds, and return as rain. The difficult point was the technical implementation of transmitting and linking the music information to the other floors while completing the production on each floor. I believe that we were able to create a new form of concert in which the audience adds changes to Mr. Ezaki’s music and creates new music. ■ Dentsu Lab Tokyo / Creative Technologist Keita Kuki
WOW asked us to plan and implement an interactive experience that changes the images and sounds. We developed an expression based on “bubbles”, in which the audience adds changes to the artist’s music to create a different music. I had a hard time implementing it while keeping the balance between perfectly synchronizing with the sound, pleasant interaction, and beauty as an expression, but I think I was able to make it a work that I can watch for a long time.
■ Musician Fumitake Ezaki
For this one night, while repeating trial and error with young members of the same generation, we were able to create a new installation that combines performance and technology. With the theme of “unlearning”, I assumed that the audience would change the timbre, and composed music that could be reconstructed through sessions. Until now, most concerts have been purely instrumental performances, but I would like to challenge concerts that combine installations like this in the future. Overview of WOW 25th Special Anniversary Live Installation “sonus-oleum* ; Visual design studio WOW held a reception party in conjunction with the exhibition “Unlearning the Visuals”, which will showcase new original works for the first time from October 15th (Sat) to 30th (Sun). held a special concert WOW 25th Special Anniversary Live Installation “sonus-oleum*;
Name: WOW 25th Special Anniversary Live Installation “sonus-oleum*; Sonosorium” Date: Thursday, October 20, 17:30-22:00
Location: 2-1 Higashi-Shinagawa, Shinagawa-ku, Tokyo (T-LOTUS M) Participants: Fumitake Ezaki (Pf.), Shuntaro Tsuneda (Vn.), Sonoko Muraoka (Vc.) / Katsuhiro Chiba (Sound Desinger) / Dentsu Lab Tokyo / WOW
About Fumitake Ezaki
musician. Born in Fukuoka City in 1992. He learned piano from the age of 4 and composition from the age of 7. Graduated from the Faculty of Music, Tokyo University of the Arts. Completed the master’s course at the University of Tokyo. In addition to working as a keyboard at WONK, millennium parade, he participated in recording and producing works of many artists such as King Gnu and Vaundy. In addition to working on theatrical music for the movie “Homunculus” (2021), he continues his activities while freely crossing various fields, such as presiding over a music label and participating in art education. In 2021, he started his solo music activities.
https://ayatake.co/ 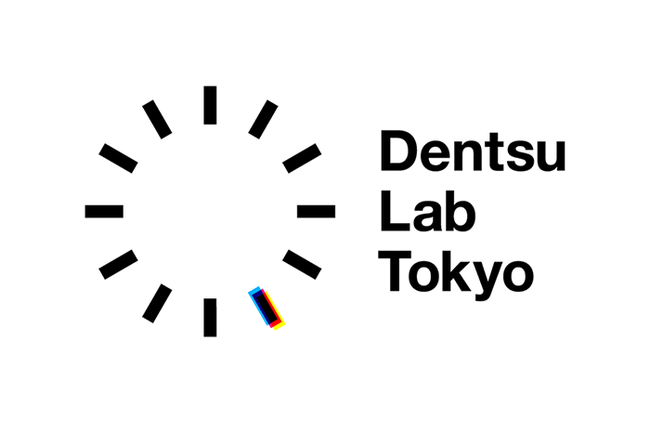 Dentsu Lab Tokyo is a creative R&D organization that integrates research, planning, and development. Based on the philosophies of “PLAYFUL SOLUTION” and “Omoimoyonai”, we use digital technology and ideas to develop expressions that move people’s hearts and to solve social issues that the world needs today.
https://dentsulab.tokyo

One thought on “Dentsu Lab Tokyo, which solves social issues with technology and ideas, collaborated with musician Fumitake Ezaki and visual design studio WOW to develop an interactive listening experience that connects performers and audiences.”