Otemon Gakuin University (Abbreviated name: Oidai, Ibaraki City, Osaka Prefecture, President: Masahiro Manado), University of Hawaii Kapiolani Community College (Honolulu, Hawaii, President: Louise Pagot, hereinafter referred to as KCC) and study abroad and double degree A partnership agreement regarding the opening of the program will be concluded on September 29, 2022, and a double degree program for international students will begin in 2023.
This is the first university in the Kansai region to offer a double degree program with KCC.
[Image 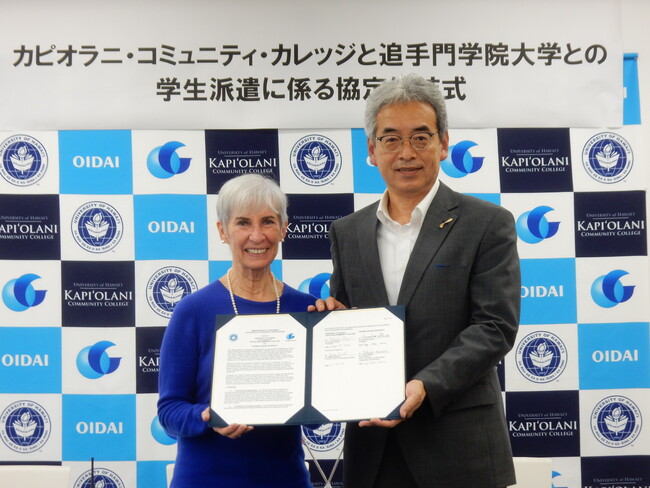 (Left) KCC President Louise Bagot (Right) Oidai Vice President Ken Matsui Eligible students are those majoring in international culture, which opened in April 2022, studying abroad at KCC for one year starting in the fall semester of their second year, earning the required credits, and earning additional credits during their four years at KCC. It will be possible to obtain two degrees, University and KCC.
Kapiolani Community College (KCC) is the largest of the seven community colleges (public two-year universities) operated by the Hawaii State University system, with approximately 6,500 students studying food, hospitality tourism, and information science. In addition to developing programs such as , Second Language Education, you can major in liberal arts with the aim of transferring to a four-year university. Participating students will acquire about 60 credits from subjects related to liberal arts at KCC, aiming to acquire the knowledge and experience necessary to be active globally from an international perspective. You will be able to choose from a wide range of career paths as a step towards further education. In addition, based on an exchange study abroad agreement with the Hawaii State University Community College Office, we will send students to all faculties and accept KCC students.
KCC President Louise Pagot, who attended the partnership agreement signing ceremony held on September 29 at the Ibaraki Yasui Campus, said, “We are actively promoting internationalization, and in addition to cooperation at junior and senior high schools, exchanges between universities are becoming more important. I hope that it will become even more popular,” he said.
【point】
Partnership Agreement Concluded with University of Hawaii Kapiolani Community College for Exchange Programs, etc.
A new double degree program that allows students to earn two degrees in four years
The target is students majoring in international culture at the Faculty of International Studies, who will complete 60 credits in one year of study abroad.
[Collaboration matters]
Matters concerning promotion of internationalization of both universities Matters concerning degrees and credits
Matters concerning student exchange