The Tokyo Umbrella Fund (Secretariat: General Incorporated Association Tsukuroi Tokyo Fund [https://tsukuroi.tokyo/] Representative: Tsuyoshi Inaba) is expanding with the increase in the number of “homeless” people in a broad sense. It was established to meet the needs of emergency accommodation assistance such as payment of hotel bills. We started operation and activities in April 2019 with the aim of collecting funds with cooperating organizations and subsidizing emergency accommodation support funds. There are currently 17 cooperative organizations (as of September 2022).
In the two years from April 2020 to April 2022, when the corona crisis was in full swing, we supported a total of 771 people for 1,830 nights.
In addition, we will carry out crowdfunding
(https://congrant.com/project/umbrellafund/5640) to continue support during the year-end and New Year holidays from 2022 to 2023. [Image 1 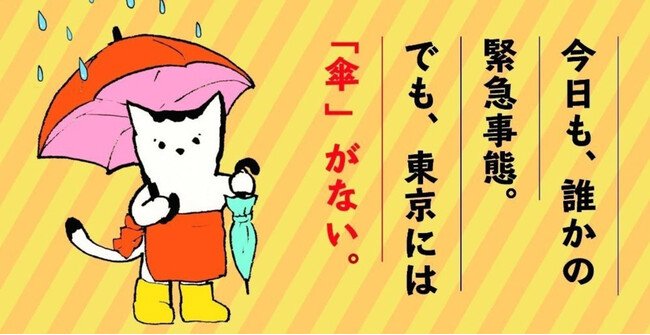 ■ Expanding the scale of subsidies in the wake of the corona crisis “Tokyo Umbrella Fund” started operation in April 2019 (Secretariat: General Incorporated Association Tsukuroi Tokyo Fund
[https://tsukuroi.tokyo/] Representative: Tsuyoshi Inaba).
The impact of the corona misfortune in 2020 was tremendous. There have been many people who have lost their stable homes due to economic hardship, and those who have been forced to leave their homes due to requests to close “Internet cafes” due to the declaration of a state of emergency.
The Tokyo Metropolitan Government has been providing temporary accommodation facilities for those who have lost their homes due to the effects of the new coronavirus infection, but there are temporary waiting areas and those who have fallen out of support until such public support is provided. It became necessary to secure an evacuation site for
In addition, Tsukuroi Tokyo Fund, with the support of various citizens, targets people who have lost their homes. We operate the support scheme “Sekai Bivouac” (https://sekaibivouac.jp/).
[Image 2 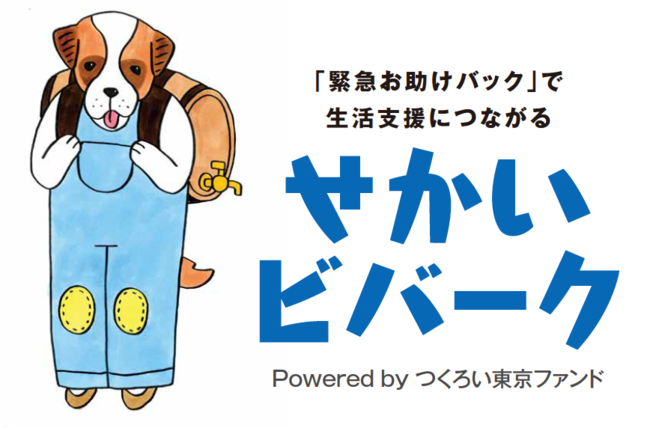 In some cases, support staff will visit people who have received this “Emergency Help Pack”. If necessary, we provide follow-up support such as support for accommodation expenses after that and accompanying welfare application from the next day onwards. Similarly, many other support groups also have a consultation system in which support staff rush to the person seeking advice and provide further support. Increase in people losing their homes
Growing need for emergency consultations by support groups
It became clear that it was necessary to provide accommodation at the time of emergency consultation.
In response, the Tokyo Umbrella Foundation has expanded the scale of its initial grants and continued to provide emergency accommodation support. (Currently, we subsidize up to ¥6,000 per night x 7 nights) [Image 3 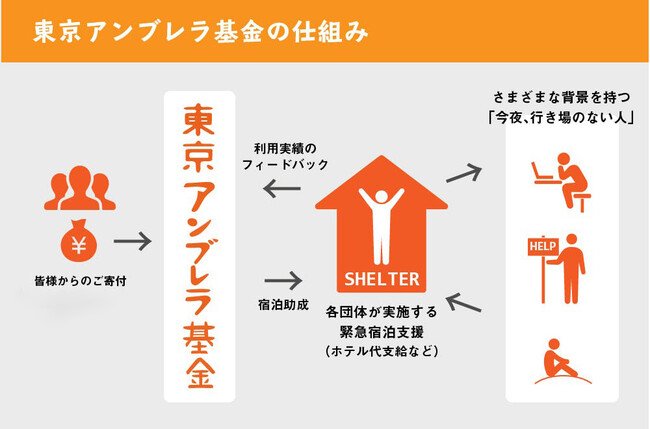 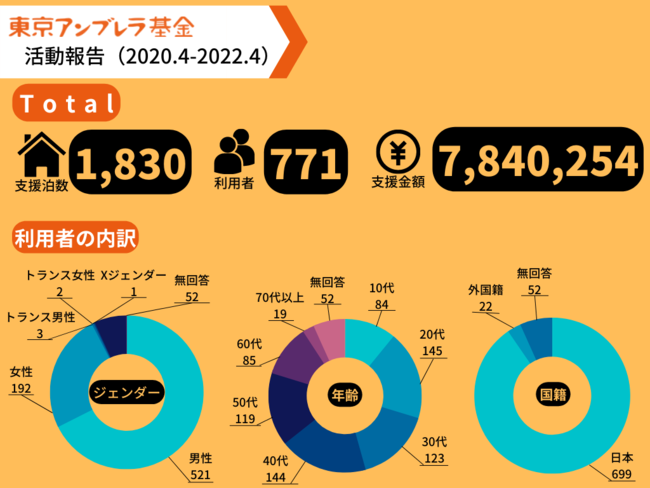 Total supported nights: 1830 nights
Total number of users: 771
Total support amount: ¥ 7,840,254
User breakdown
●By gender
Male: 521
Female: 192
Trans men: 3
Trans woman: 2 people
X gender: 1 person
No answer: 52 people
●By age group
Teens: 84 people
20s: 145 people
30s: 123 people
40s: 144 people
50s: 119 people
60s: 85 people
Over 70s: 19 people
No answer: 52 people
●By nationality
Japan: 699
Foreign nationality: 22 people
No answer: 52 people
■ Examples of support cases
In 2022, this summer when the severe heat endured.
Mr. A received an emergency help pack at the pick-up spot of “World Bivouac” in Shinjuku. On that day, I stayed at a business hotel affiliated with the Tsukuroi Tokyo Fund, and the next day, the support staff visited me for advice.
At the time of this interview, Mr. A advised me that “I have a job, but I don’t have a place to stay until work starts.” .
A few weeks later, Mr. A contacted the support staff again. It seems that he lost his job, and Mr. A at that time was spending time at an internet cafe and was in a situation where he could not move. Our staff urgently rushed to the hotel and once again used the emergency accommodation support provided by the Tokyo Umbrella Fund to provide accommodation at the hotel.
After that, Mr. A used a share house of a partner organization and applied for public assistance.
Even if people like Mr. A have a prospect of getting a job or are actually working, there are people who get lost in Tokyo without an umbrella. Needs for emergency accommodation support are also appearing in this way.
In addition, even when people lost their jobs, the support group was able to connect to welfare support by responding as a network. ■ Regarding future operations
I believe that the main purpose of the Tokyo Umbrella Fund’s emergency accommodation support is to connect those who use it to public support.
However, it is also true that public support is on the decline as the impact of the corona crisis becomes routine and social interest turns to “post-corona” and “with corona”.
In addition, there are cases where emergency accommodation support is required even if the person is working and cannot be covered by existing public support.
The reality is that the need for support like an “umbrella” to fill the gaps in the “roof” of public support is increasing more than ever. In order to expand this “umbrella” even a little, we will continue to strive to operate the Tokyo Umbrella Fund so that various
organizations can use it.
■ Implementation of crowdfunding
Crowdfunding will continue until December 31st in order to continue support during the year-end and New Year holidays from 2022 to 2023. A city where everyone accepts each other’s differences, overcomes all divisions, and no one gets lost on the streets.
We will create such a Tokyo by connecting beyond the boundaries of organizations.
This year-end and new year, to Tokyo where no one gets lost on the streets. The target amount is 3 million yen so that the Tokyo Umbrella Fund can fully subsidize emergency accommodation support funds for cooperating organizations.
Please support this activity together!
Click here for the crowdfunding page
https://congrant.com/project/umbrellafund/5640
■ About Tsukuroi Tokyo Fund
In June 2014, Tsukuroi Tokyo Fund, a general incorporated association, was established by members of multiple organizations that have been engaged in support activities for the needy in Tokyo under the slogan “Let’s use the power of citizens to repair the cracks in the safety net!” Established a gathering. We are developing a variety of projects such as shelter management for people who have lost their homes, share houses for young people using vacant houses, cafes and children’s cafeterias where people who used to live on the streets work, and the Tokyo Umbrella Foundation.
https://tsukuroi.tokyo/