Dear Sir
Giorgio Armani Japan Co., Ltd.
[Emporio Armani] 2022-23 fall winter runway collection has started
Emporio Armani Fall Winter 2022-23 runway collection with strong and beautiful color contrasts. The runway look, which received high acclaim at Milan Fashion Week, where the new collection was announced, has started to be sold at Emporio Armani women’s boutiques nationwide. The theme of the Emporio Armani Fall/Winter 2022-23 collection is “RHYTHM OF COLOR”. Based on the idea that glamor is something that emanates from an individual’s “individuality,” that individuality is expressed in a color palette.
We would like to introduce this season’s popular looks from the runway items that are appearing one after another in stores.
The look, which features a unique jacket, incorporates the masculine design and shape seen in the uniform, while adding a feminine touch through the use of materials and colors to express Armani’s
“glamorous” look. Combining a masculine jacket with a compact inner layer and coordinating pants with a texture that melts on the skin expresses delicate femininity in strength. The deep red color used for the point adds gorgeousness to the look by using velvet material. [Image 1 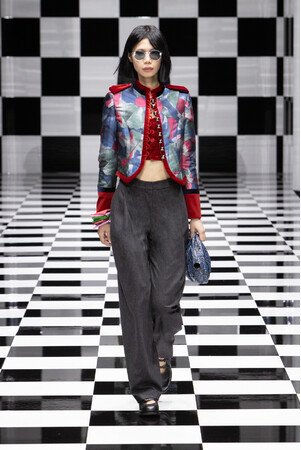 Jacket ¥168,300 Inner tops ¥49,500 Pants ¥95,700 (all tax included) A look that makes you feel strongly about the “rhythm of color”, which is the theme of the season, has also arrived. The pastel pink look, which is characterized by the combination of the three-dimensional sparkle of the sequins and the light reflection created by the organza used in the pants, brings an eye-catching brightness to the fall and winter season, when dark tones are increasingly worn. increase. Combining materials with strong individuality gives strength to feminine colors and makes the wearer’s individuality stand out. [Image 2 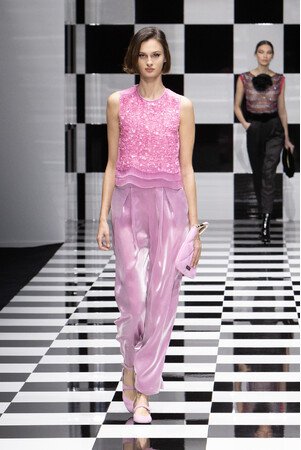 Tops ¥ 195,800 Pants ¥ 107,800 (all tax included)
Also, check out the all-black look that appeared later in the show. Although it was made with only one black color, by combining different materials, various types of brilliance were mixed to express “glamour” in the Armani style. In addition to mode coordination like a runway look, each item can be used individually for daily coordination. [Image 3 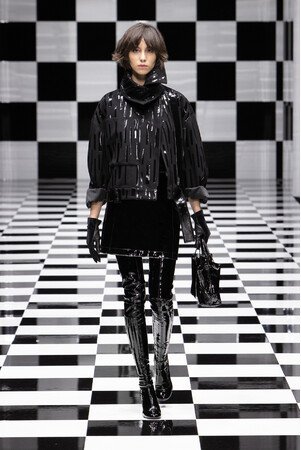 Outer ¥396,000 Skirt ¥68,200 (all tax included)
There are also dressy looks that are perfect for the end of the year party season. The beautiful balance of masculinity and femininity is attractive, such as coordinating a beautiful glossy velvet mini dress like a long jacket, or combining a white shirt with a large bowtie. [Image 4 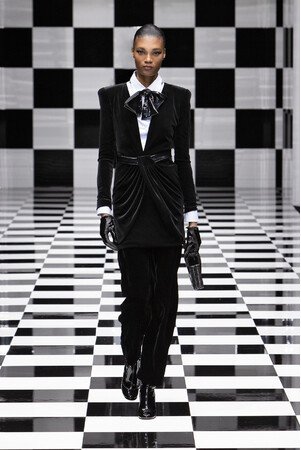 Mini dress ¥ 129,800 Shirt ¥ 37,400 Pants ¥ 75,900 (all tax included) Emporio Armani’s 2022-23 fall/winter collection of runway items that give you a stronger sense of the world and messages can be seen at Emporio Armani women’s boutiques nationwide.