GMO Internet Group
A serial audio drama born from a collaboration project with “Puri Novel by GMO” and “ONE N’ ONLY”, a group of six male artists with over 4.7 million TikTok followers, will be exclusively distributed on Spotify from October 28.
Yanai Yumena’s first attempt at an audio drama, ONE N’ ONLY’s Naoya Kusakawa, Kenshin Uemura, Suzuharu Kawashima and other fresh young actors and artists will appear.

The chat-type novel service “Puri Novel by GMO” (URL:
https://novel.prcm.jp/) operated by GMO Media Co., Ltd. (President: Teruyuki Mori, hereinafter referred to as GMO Media) of the GMO Internet Group is Stardust Promotion. An audio drama created in collaboration with the 6-member dance and vocal unit “ONE N ‘ONLY” will be released exclusively on the audio streaming service “Spotify” on Friday, October 28, 2022. rice field.
This audio drama is based on the theme of “My Love”, the song “My Love” from “ONE N’ ONLY”. It will be distributed exclusively on Spotify.
The main character, Karin Hanayama, who is not good at boys and can’t even talk to her politely, is played by Yumena Yanai, who is also an actress and talent. The handsome transfer student Ao is played by Naoya Kusakawa of ONE N’ ONLY. ONLY’s Kenshin Uemura and his best friend, Ruka, will be played by a fresh young man named Suzuharu Kawashima.
[Image 1 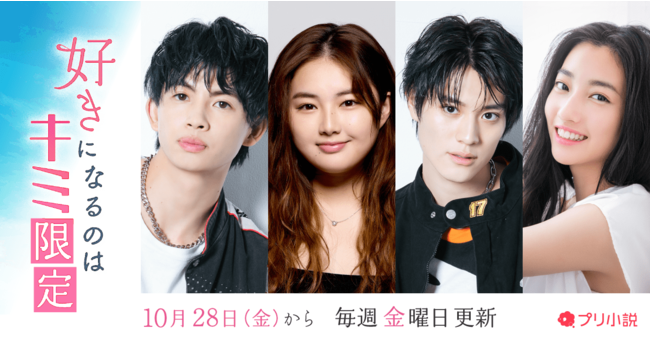 Audio drama special site: https://novel.prcm.jp/campaign/audio-drama-sukikimi “Suki ni naru wa Kimi niten” (written by Naana), which was selected as the original draft for the audio drama, is a collaboration project between “Puri Novel by GMO” and “ONE N’ ONLY”, and the song of “ONE N’ ONLY”. This is a novel work that won the Grand Prix in a contest to recruit novels based on the image of “My Love” or “Bla Bla Bla” (held from Wednesday, June 15, 2022 to Sunday, July 31, 2022).
https://www.gmo.jp/news/article/7849/
The role of Karin Hanayama (Yumena Yanai)
Karin, who I played, has not had much love experience and is similar in that she is sloppy, so I challenged myself to voice acting while putting myself into it.
It’s my first time acting with only my voice, so I’m a little nervous, but I hope many people will listen to it and get excited (Heart) The role of Aoi Amamiya (Naoya Kusakawa (ONE N’ ONLY))
I’m Naoya Kusakawa, who played the role of Aoi Amamiya! This time, the story was based on ONE N’ ONLY’s songs, so my feelings for the work were stronger.
Since it’s an audio drama, I had to struggle with the difficulty of expressing everything with just my voice, but I think I’ve become my own blue. All 20 episodes, I hope everyone will enjoy every Friday, so please make your heart beat!
Nao Watabe (Kenshin Uemura (ONE N’ ONLY))
This was my first attempt at an “audio drama”, and I realized the difficulty and enjoyment of acting with just my voice. And I am honored to be able to create a work by working hard with actors of the same generation. I hope you will enjoy each and every episode. I will definitely be excited! thank you.
The role of Ruka Hayashishita (Suzuharu Kawashima)
I’m Suzuharu Kawashima, who played Ruka. The voices of Mr. Yanai, and Mr. NAOYA and Mr. KENSHIN, which flowed through the headphones during the recording, were really wonderful, and I remember being very excited at the moment when the characters trapped in the paper were breathed into life. I hope everyone will enjoy the “voice” and the heart-pounding “story”.
[Comment from Chieko Nishi, Director of Spotify Audio Content Business] We are delighted that Spotify, which allows you to enjoy music and talk shows from all over the world in one app, was chosen as a platform for developing creative projects that deliver audio dramas born from novels inspired by songs. increase. Spotify is constantly working to create an environment where listeners can discover new favorites, enjoy them, and connect with artists and creators. We hope that through these projects, young listeners who enjoy music will be interested in creating, and we will be able to spread their own stories and thoughts by voice, and provide an opportunity to expand the listeners.
[Overview of the audio drama “Limited to you”
Delivery date: Every Friday at 12:00 from Friday, October 28, 2022 (20 episodes in total)
(Episodes 1 to 3 will be distributed for the first time on 10/28, and will be updated one episode each week thereafter)
■ Fee: Free
■ How to listen: You can listen on “Spotify” or “Puri Novel by GMO” “Spotify”: https://open.spotify.com/show/5YZz8C1sVc8s8W78s78CHg “Pre-novel”: https://novel.prcm.jp/campaign/audio-drama-sukikimi ■ Story:
Karin Hanayama, second year high school student. I’m not good at boys and can’t even talk to Matomo, but the moment I see Ao Amamiya, who transferred to the school on the day of the opening ceremony, my heart won’t stop. Karin gradually gets closer to Ao, who sits next to her, even though she’s confused by the emotions she feels for the first time. Before long, a square relationship involving her best friend Ruka and her childhood friend Nao since childhood! ?
A sweet and sour pure love story woven by a novice high school girl and a cool handsome transfer student.
■ Cast:
Yumena Yanai
Naoya Kusakawa
Kenshin Uemura
Suzuharu Kawashima
Seki Tetsuta Takao Hayato
Takashi Yukawa
Hinata Arakawa Emi Satsuki Eiku Yamashita Rei Sawamura
Mitsue Terasaka Hiromi Goto
Director: Ryo Nakajima
Screenplay: Ryo Kawasaki Music: Hiroko Yamazaki Effects: Takuro Hirosawa MIX: Kahoru Hayashi Sound: Karin Yamashita, Shoki Yasui Studio: MIT STUDIO Production cooperation: POPHOLIC Production: SDP Planning/Production: GMO Media
[What is “Spotify”] (URL: https://www.spotify.com/jp/)
“Spotify” is an audio streaming service used by over 456 million users (*1) in 183 countries and regions around the world. You can enjoy audio content such as over 80 million songs and over 4.7 million podcasts for free on various devices such as smartphones, computers, and tablets according to the location and scene.
*1 As of October 28, 2022
[What is “Puri Novel by GMO”] (URL: https://novel.prcm.jp/)
“Pre-novel by GMO” is a service that started in October 2017 that allows you to read and post chat-type novels in which characters are having a conversation. Since its launch, it has gained popularity as a service that makes it easy to read novels, and as of September 2022, the number of users has exceeded 2.03 million.
On July 29, 2020 (Wednesday), KADOKAWA Co., Ltd. will publish a popular serialized work “With you in the world without color” (written by Aoi Sakaki URL: https://prcm.jp/campaign/ironai). We are also supporting creators who are active in “pre-novel by GMO”, such as being released and a comicalization project is underway.
In November 2021, the official work of the pre-novel will be released as an audio drama on Spotify, and a “chat-type novel to enjoy with your ears” will also be released.
■ App version “Puri Novel by GMO”
・URL
iOS／https://apps.apple.com/jp/app/id1459100798
[Image 2