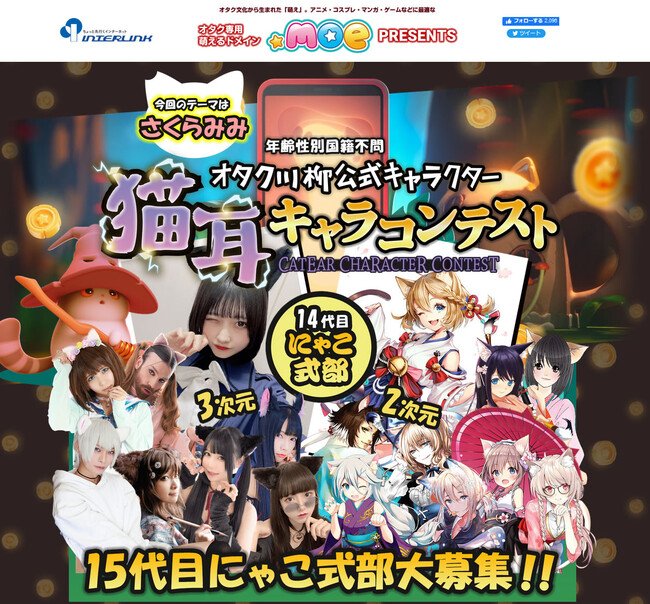 Nyako Shikibu is the official character of “Otaku Senryu”, which our company has held every year since 2004. passed the final selection The Grand Prix will be decided by popular vote from 10 people. Grand Prix winners in the 2D and 3D divisions will each receive a prize of 100,000 yen.
Past Grand Prix winners in the 3D category include popular cosplayer Yayoi (12th generation), former voice actor and popular cosplayer Shirayuki (11th generation), man’s daughter Rei Enomoto (9th generation), talent Singer and wrestler Lady Beard (8th generation), popular cosplayer Mitaka (7th generation), idol Reo Yuzukisaki (6th generation), race queen and talent Noro-chan (4th generation), etc. Senpai Nyako Shikibu is active in various genres.
The application condition for the 15th generation “Nyako Shikibu” is to “turn cat ears into cherry ears” for both the 2D and 3D divisions. Sakuramimi is a mark of a “local cat” that is managed and watched over. The ears are cut in the shape of cherry blossom petals as a mark that has been sterilized to prevent cats from increasing in harsh environments outdoors. Without this mark, you run the risk of being captured and anesthetized multiple times. This time, I wanted many people to know Sakura Mimi, so I made it an application condition. In addition, we will donate 100 yen (maximum 100,000 yen) for each entry to CAIT SITH (*), a specified non-profit organization that aims to eliminate cat culling.
For 2D, please send me a cat-eared illustration of “Mimi Sakura”, and for 3D, please send me a cosplay photo pinned so that the cat ears look like “Mimi Sakura”. As long as you live in Japan, there are no restrictions on nationality, gender or age. Please feel free to apply. [Image 2

A long-established ISP that started its service in 1995, the dawn of the Internet in Japan, and is now in its 27th year. We started the domain name registration business in 2000, and in October 2006, we were certified as the eighth ICANN accredited registrar in Japan. In January 2014, as a registrar partner of Google in Japan, we accepted the registration of the new gTLD “.minna”, which is the first Japanese language gTLD. In October 2015, the number of domains handled exceeded 1,000 (https://www.gonbei.jp/), the largest number in Japan. The Otaku Senryu Grand Prize (https://575.moe/) and the Red Feather Community Chest in the virtual world Second Life as a social contribution activity are held every year, and the limited liability business union Femto Startup (https://femto. vc) actively supports venture companies. June 1, 2020, head office
Office closed and transitioned to a nomad work (telework + WeWork) system. From May 16, 2022, we have introduced a three-day work week on a trial basis. https://www.interlink.or.jp/new/2022/0510.html