intertour
[Survey on the image of students about banks] Is student support low even with a desire for stability during the corona crisis? “Stable” and “High salaries” give a sense of tradition and status, but on the other hand there is little change and an impression of work such as “old-fashioned culture” and “nationwide transfer”.
“23/24/25/26 Graduates Image Research by Industry Bank Edition” June 2022 [Intertour Co., Ltd.]

Intertour Co., Ltd. (Representative: Masahiro Sakuma, Headquarters: 2-4-1 Hamamatsucho, Minato-ku, Tokyo, World Trade Center Building South Building) conducts a survey of 23-26 graduates,
“Industry-specific image survey bank edition.” ] announced the results.
In the same survey, we asked students who graduated from 23 to 26 about their impression of the banking industry as a place of employment. In addition to the good and bad images of the industry, we are investigating the specific image of the job and whether it is the industry you want to work for. (Survey period: June 14 to June 20, 2022, number of valid responses: 840)
According to the survey results, 70.8% of respondents answered that the company is “stable” as a positive image, while other top responses included “high salaries,” “many excellent human resources,” and “traditional and historical.” Approximately half of the students answered that they had a negative image of the city, such as “there is an old-fashioned culture” and “there are transfers nationwide.” In addition, although it is said that students are becoming more stable-oriented, the number of students who are (or may be) selected is 33.9%, which is a minority compared to other popular industries. Are you influenced by media news? Banking industry image
survey-document download
https://intetour.biz/download/220809questionnaire?utm_source=prtimes&utm_medium=report&utm_campaign=06g [Image 1 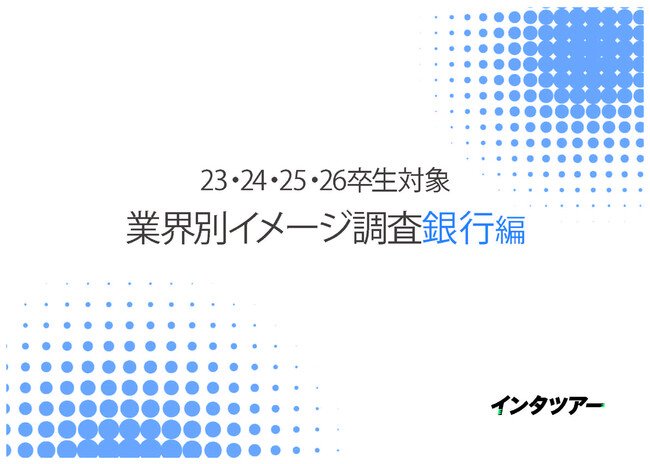 When students choose a company for job hunting, in the majority of cases they select an industry after researching the industry, and then choose a company from among them. In this industry selection stage, students accumulate information such as “popular industries”, “unpopular industries”, and “industries that are suitable for them”. In this survey, we conduct a questionnaire to students about the “image of the industry” that forms the basis of judgment when selecting this industry. In this survey, we investigated the image that students have of “banks”.
Key points of the survey results

・The positive image of banks is a high-status industry with a tradition of “stable”
・The negative image of the industry is the impression of an old organization such as “traditional culture” and “nationwide relocation” ・Negative images such as sales quotas, declining industries, and system failures ・The content of the specific work is image of “financing, investment” and “handling money”
・ Only a small number of students (33.9%) will (or may) be selected. ・Competing aspiring industries are well-known “manufacturers”, “advertising/mass media”, “securities/insurance”
・ [Familiar company name] Many answers were from the three major megabanks + Japan Post Bank
There are many names of familiar financial institutions such as regional banks and internet banks.
Survey outline

Question 1 asked about the good image of the bank. The most popular answer was “stable” at 70.8%, far exceeding the other options, and it can be seen that the image of high stability is very strong even in unstable social situations. As for the other options, 31.0% of the students answered “high salary” and 29.0% answered “many talented people”. In addition, 22.5% of workers have a strong image of being “traditional and historical” and 18.5% of them are “high status,” indicating that the industry is recognized as a long-established, high-ranking job/industry.
[Image 5

In question 2, we asked about a good image of the bank in a free description. In addition to the image of being a leader in the monetary economy, such as “I’m going to become more knowledgeable about money” and “I’m becoming more knowledgeable about investments,” the majority of students cited the image of being a hard job, such as “formal,” and “precise.” .
The negative image of the industry is the impression of an old organization such as “traditional culture”, “nationwide transfer”, and “laboratory”.There are also negative images such as sales quotas, declining industries, and system failures.

Question 3 asked about the bad image of banks. The most popular answer was “Traditional culture” at 45.6%, followed by “National transfer” at 43.5%. In addition, 31.4% of respondents said that they were “work-oriented” and 28.3% of them said that they had a high degree of freedom. On the one hand, the image of being “stable” was evaluated positively, but on the other hand, it seems that the image of doing fixed work in a work-like manner with little change felt negative. [Image 7

In question 4, we asked about the bad image of banks in a descriptive form. There were many answers such as “the quota seems to be difficult” and “a declining industry”, and information such as sales quotas within banks that have been featured in the media, low interest rates that make it difficult to generate profits, and integration and mergers are underway. I can see that you are taking it negatively. In addition, it seems that they are imagining cases that have been pointed out by society, such as system failures and scandals. There is a strong image of “financing, investment” and “handling money” as the specific job content. Only a small number of students answered that they “do not know” the specific job. 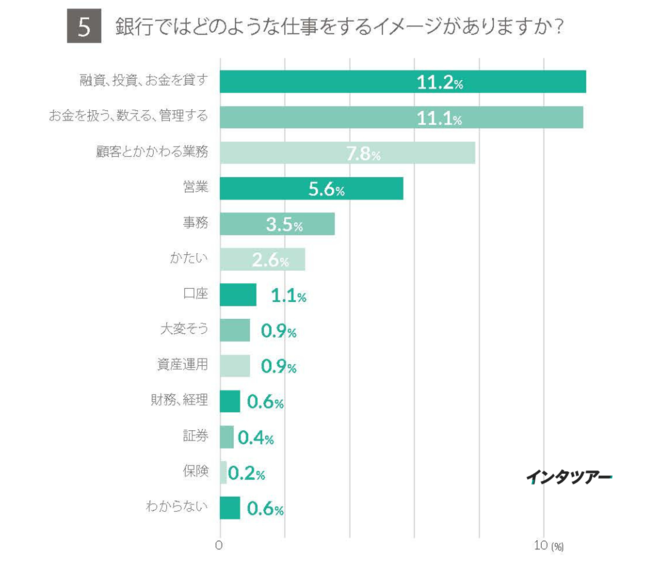 In question 5, we asked about the image of a specific job at a bank. (Keywords are aggregated from free answers)
Keywords such as “loan, invest, lend money” 11.2%, and “handling, counting, managing money” 11.1% were ranked high. There was an answer. Also, only 0.6% of the students answered “I don’t know.” In previous industry image surveys, about 10% to 40% of students answered “I don’t know” when asked about their specific image of work. You can see that you have an image of
In other responses, there were images of dramas such as “The atmosphere that Naoki Hanzawa is doing”, images of clerical work such as “checking books”, and answers that imaged the role of society such as “supporting companies”. I was. 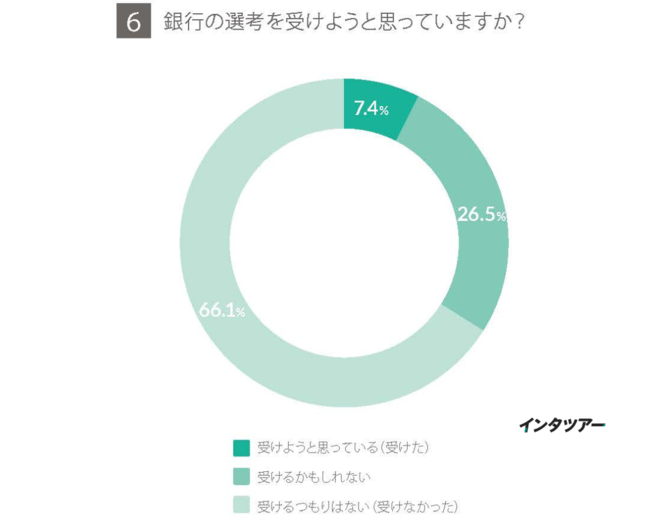 In question 6, we asked whether or not you would be selected by a bank company. 7.4% of the students answered that they “will (have) received”, and 26.5% “may receive”, making the total 33.9%. Approximately two-thirds of the students answered that they “did not intend to (did not) take it,” indicating that it is not very popular as an employment option. Even though students are said to be striving for stability, the banking industry does not seem to be very popular.
[Familiar company name] Many students answered the three major megabanks + Japan Post Bank Many names of familiar financial institutions such as regional banks and internet banks were mentioned 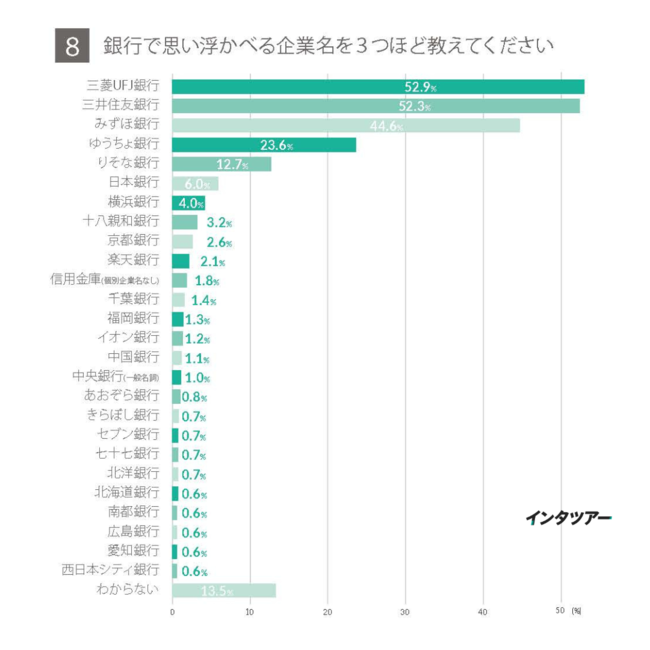 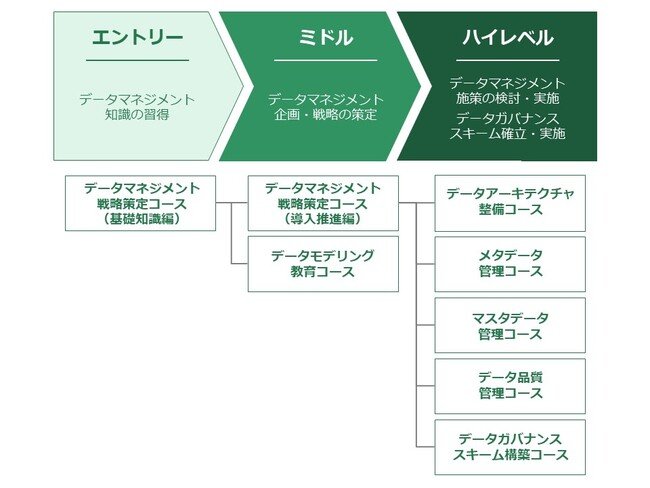 One thought on “Intertour Survey on students’ image of banks Low support for students despite the desire for stability during the corona crisis? “Stable” and “High salaries” give a sense of tradition and status, but on the other hand there is little change and a”