Ito En Co., Ltd. (President: Daisuke Honjo, Headquarters: Shibuya-ku, Tokyo) has decided on the 2,000 winning poems of the “33rd Ito En Oi Ocha New Haiku Contest” to be posted on the “Oi Ocha” product package. I was.
This year, the 33rd time, we received 1,946,459 poems from 517,367 people from 64 countries both in Japan and overseas. Among the many submitted works, the one that was selected for the highest award of the Minister of Education, Culture, Sports, Science and Technology was Saki Koyanagi (age 10) from Kawabe District, Hyogo Prefecture. is the god of
In addition, the Kaneko Tota Award was decided for Yuna Sugiyama (15 years old) from Yamato City, Kanagawa Prefecture.
The corona wreck is now in its third year, and there are many entries related to the coronavirus. It is a work that depicts the feelings of the time when “my heart burst open”, and although the influence remains, there are works that gradually change in daily life and mindset.
At the online prize-winning work presentation on October 30th, a total of 2,000 people, including the Minister of Education, Culture, Sports, Science and Technology Award, the Tota Kaneko Award, the grand prize works of each category and the final judges’ evaluations, and other winners of each category, will be announced. I’m here. The archive of the distribution video can be viewed at any time on YouTube. *Click here to watch (https://itoen-shinhaiku.jp)
Also, from November 3rd, we will start accepting applications for the “34th Itoen Oi Ocha New Haiku Contest”. For details, please check the New Haiku Contest website.
[Image 1 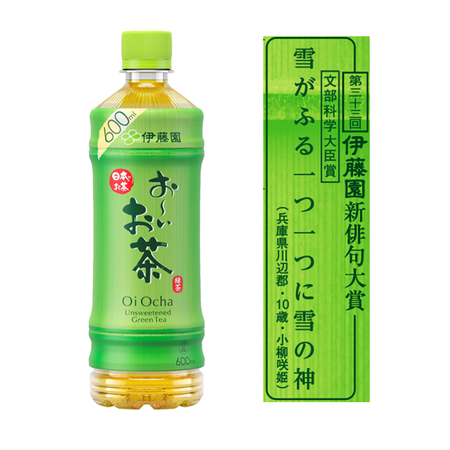 “Oi Ocha” featuring the award-winning works of the Minister of Education, Culture, Sports, Science and Technology 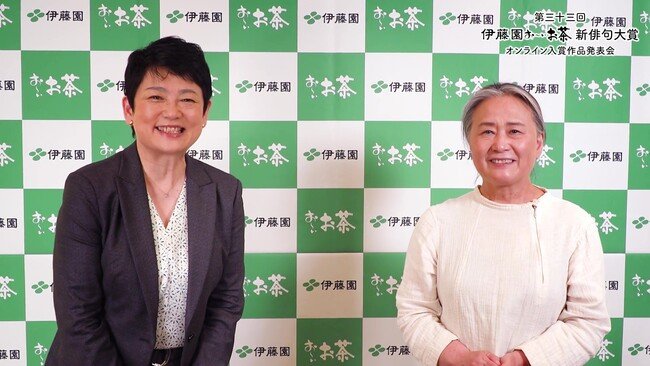 Online presentation “Opening remarks (comment by Mr. Itsuki Natsui)” ■ Minister of Education, Culture, Sports, Science and Technology Award Prize money: 500,000 yen
Prizes: Award certificate, 1 case of “Oi Ocha” with award-winning works, amount of award-winning works, collection of selected works [free speech]
Snow falls, one by one, the god of snow
Saki Koyanagi, 10 years old, Kawabe-gun, Hyogo Prefecture
(selection)
It’s snowing. Each of these snowflakes is a crystal of six flowers, and they come down from the sky without a sound. On the way, they collide and overlap each other, and fall as large snowflakes. Seeing each falling snowflake as if it were the descent of God, like the will of Mother Nature, it seems that they hold it with both hands with a majestic feeling, or spread their arms and bathe their whole body in it. . Thankfulness melts into the wonder, and you feel silent. [Author’s comment]
This haiku was created with the image of snow in winter. It’s not a snowy area to begin with, but it rarely snowed, and the entire schoolyard turned white. While looking at such a scenery, I wondered why snow fell from the sky, and wondered if God was living there. [Image 3 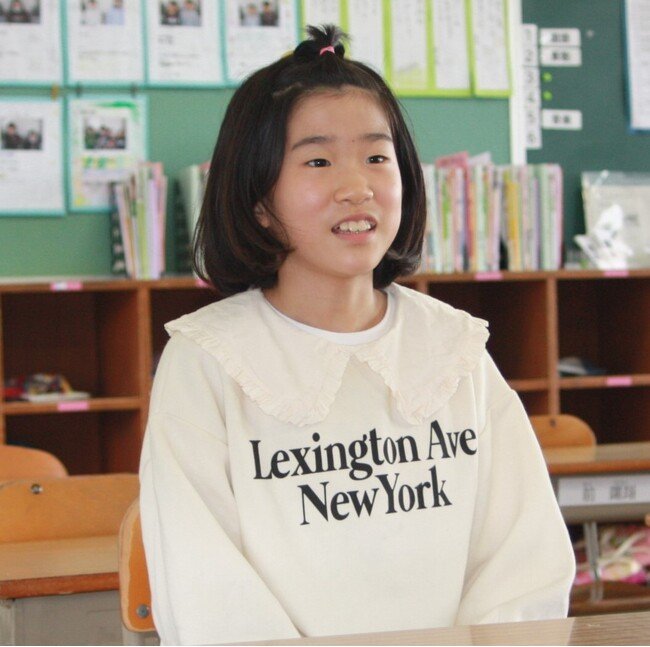 33 Minister of Education, Culture, Sports, Science and Technology Prize Mr. Koyanagi
■ Tota Kaneko Award
Prize money: 200,000 yen
Prizes: Award certificate, 1 case of “Oi Ocha” with award-winning works, amount of award-winning works, collection of selected works [free speech]
Become a beast of the autumn night and run
Yuna Sugiyama, 15 years old, Yamato City, Kanagawa Prefecture (selection)
On an autumn night, an impulse welled up in my body as if I was suddenly possessed by something. It may be an unknown impulse peculiar to adolescence. With a feeling that makes me want to raise my voice unintentionally, I run into the darkness of the night, feeling like a beast. He called it “running like a beast.” It may be a whole body and mind movement like the cry of young life.
[Author’s comment]
In October, I was able to go on a school trip that was postponed twice due to the influence of the coronavirus, and I wrote about that time. During the two-night, three-day trip in Kyoto and Nara, I was able to spend time with my friends. I ran around the room. It was like a beast running around without worrying about its surroundings. It was a lot of fun, so even after the lights went out, I was scolded by the teacher for running around, but that was also a good memory. [Image 4 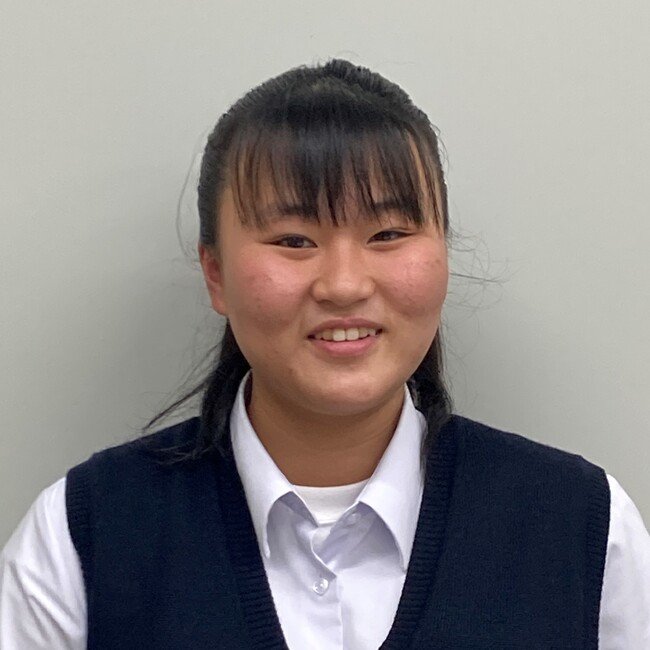 33rd Tota Kaneko Prize Mr. Sugiyama
■ Grand Prize
Prize money: 200,000 yen
Prizes: Award certificate, 1 case of “Oi Ocha” with award-winning works, amount of award-winning works, collection of selected works “Free speech”
[Elementary school division (including infants)] Total number of applications: 492,423 haiku
Gears in the breast of the robot Wait for spring
Hiroki Matsuura, 10 years old, Kitauwa District, Ehime Prefecture (selection)
Animated robot dolls are placed in the corners of toy boxes or warehouses. Is it snowing outside? Now it doesn’t move, it’s just a single static object. When spring comes, they will start to move as children’s playmates by winding the screws of the gears on their chests. Until then, I will be quiet and patient, waiting for spring. [Junior high school students] Total number of entries: 495,549 haiku Winter galaxy in the city where a single father lives
Yuina Kurihara, 12 years old, Yame City, Fukuoka Prefecture
(selection)
My father was transferred to a rural area, and now I live apart from my family. The winter galaxy in the night sky that you look up at is also hanging over the town where your father lives, so you may be looking up at this winter galaxy in the same way and thinking about your family. It must be lonely for fathers who live alone. The feeling of wanting to see you soon is reflected in the winter galaxy. [High school student division] Total number of entries: 799,630 Gypsum and Summer Class Alone
Miku Saito, 17 years old, Katsushika Ward, Tokyo
(selection)
After school, I stay in the classroom and work on the plaster statue of the arts and crafts assignment. In this case, how do you receive the contents of “two people alone”? From the context, it can be read as a plaster statue and two people alone. I may have once called out to you like a buddy while I was making a plaster statue. This feeling made the summer classroom feel like a communion of life.
[General category A (under 40)] Total number of entries: 42,857 Praying mantis eye power unmanned direct sales store
Seiya Shibazaki*, 33 years old, Saitama City, Saitama Prefecture *Officially Tatsusaki
(selection)
The unmanned farmer’s market is a small stall-like hut on the roadside near the fields. The vegetables there are fresh, probably picked in the morning. The praying mantis sees it as unforgivable to the creatures who prey on those vegetables. There is no sign of anyone coming yet. The praying mantis’s eyes are shining brightly, and it seems that it has just stepped out.
[General Section B (40 and over)] Total number of entries: 79,070 New Year’s card only for Uzumaki of two-year-old child
Yoshimi Matsui (58 years old) Fukui City, Fukui Prefecture
(selection)
Judging from the author’s age, the two-year-old is probably a grandchild. The Uzumaki, a grandchild, added to my parents’ New Year’s card, expresses my heartfelt greetings even though I can’t write letters yet. It’s irresistibly cute, and you can take it like a word that doesn’t turn well on your tongue. I trace the handwriting to touch the voice. Feeling the swirl of life in the whirlpools. [English haiku section] Total number of entries: 33,941
looking for girl names
we pick
wildflowers
We pick wildflowers in search of our daughter’s name
Edward Huddleston, 29 years old, USA
(selection)
While searching for a good name for a daughter who might be blessed, the two go out into the fields and pick pretty flowers. Whether you want to follow the name of the flower or just want to get some inspiration. The simple parental affection overlaps with the admiration for wildflowers, and the beautiful scenery makes for a deeply flavorful haiku. “Nonohana” is a season word for autumn, but since it was written by an American, it may be spring or summer. [New Haiku Photo Section] Total number of entries: 2,989
Leave the fluorescent lamp that is about to burn out
Manami Hayashi, 24, Kawanishi City, Hyogo Prefecture
[Image 5 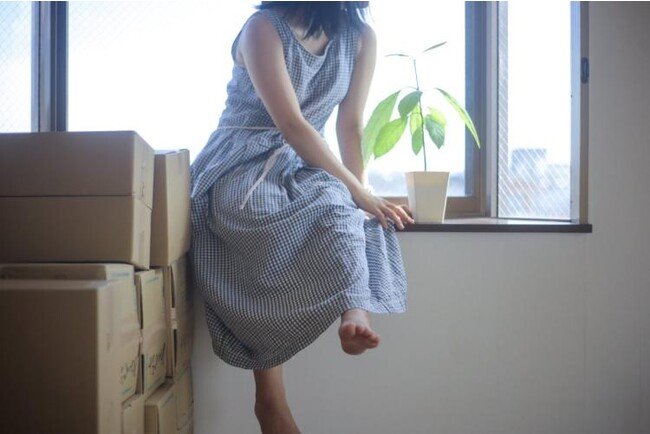 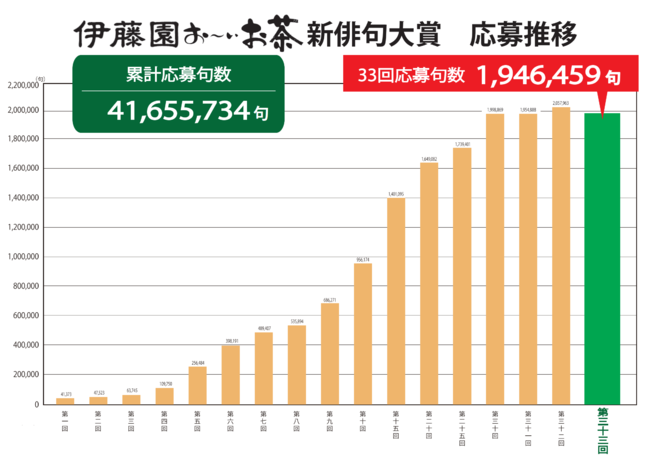