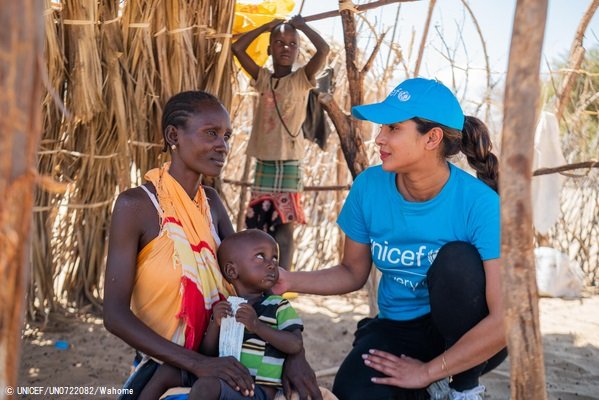 Goodwill Ambassador Priyanka Chopra Jonas cuddles with 2-year-old Apollo after being diagnosed with malnutrition and receiving ready-to-eat therapeutic food (RUTF). (Kenya, taken on October 18, 2022) (C) UNICEF_UN0722082_Wahome
[From Nairobi/New York on October 20, 2022]
UNICEF Goodwill Ambassador Priyanka Chopra Jonas traveled to northern Kenya this week to meet children suffering from severe acute malnutrition due to prolonged drought across the Horn of Africa. * * * *
During his two-day visit, Chopra Jonas visited Turkana, one of Kenya’s 15 counties affected by climate change-induced drought and ongoing COVID-19. . Nearly one in three children in Turkana County suffers from acute malnutrition. About 900,000 children under the age of five in drought-affected counties require treatment for life-threatening severe acute malnutrition.
[Image 2 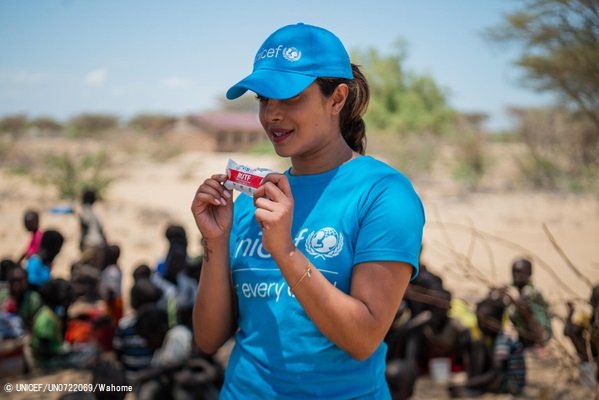 Goodwill Ambassador Priyanka Chopra Jonas holding ready-to-eat therapeutic food (RUTF). (Kenya, taken on October 18, 2022) (C) UNICEF_UN0722069_Wahome
“Children are dying of hunger in the Horn of Africa, and millions more are on the brink of starvation,” said Chopra Jonas. “Most of the families I met were living on less than $1 a day, and some had gone three days without food. is helping to stop this hunger crisis through its on-the-ground interventions, including the distribution of therapeutic food that can save the lives of children.”
Kenya’s 1.4 million children will have access to nutritious food, safe drinking water, health services and education, and protection from violence and neglect as a result of lack of rain in the past four rainy seasons. is in a difficult situation. The situation is expected to worsen further with the prospect of a fifth rainy season, and more children and families in need of humanitarian assistance. In response to the crisis in the Horn of Africa, UNICEF has scaled up nutrition services, distributing therapeutic milk and ready-to-eat therapeutic meals (RUTF) to health facilities, and providing nutritional support in the hardest-to-reach areas. We support governments to identify delinquent children and connect them to treatment.
[Image 3 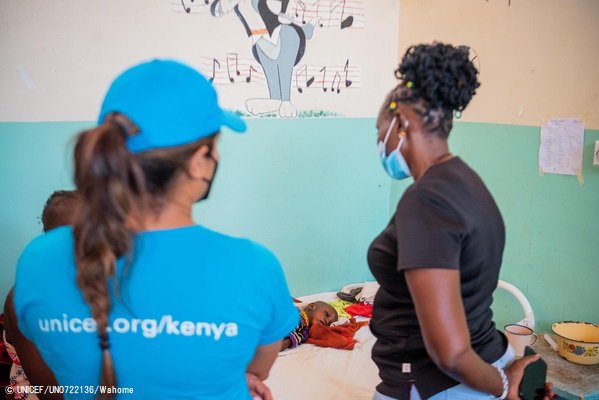 Two-year-old Keesa is hospitalized with symptoms of pneumonia, edema and malaria in addition to severe acute malnutrition at the Child Stability Center inside a hospital in Turkana. (Kenya, taken on October 18, 2022) (C) UNICEF_UN0722136_Wahome
“UNICEF works tirelessly with governments and other partners to minimize child deaths in the most difficult circumstances,” said Jan Rokenga, UNICEF Acting Representative in Kenya. says. “This dire situation could be exacerbated, especially if there is no rain in the next rainy season, or funding shortages make life-saving supplies like the RUTF unavailable. Neighboring countries desperately need additional and sustained responses to this crisis, and Chopra Jonas, as a UNICEF Goodwill Ambassador, has brought much-needed attention to funding the drought response. Thank you for helping make sure all children have access to help.”
Chopra Jonas visited the Pediatric Stabilization Center at Lodwar General Hospital in Lodwar, Turkana County. At the Pediatric Stabilization Center, where children with the worst health conditions receive specialized care, Chopra Jonas met Keesa, a two-year-old boy who was hospitalized for severe malnutrition. Unable to fight off illnesses due to her weakened immune system, Keiza suffered from malaria, pneumonia and edema. Community health volunteers visited Keesa’s home in Nakwamekwi village, Lodwar, and were able to identify his symptoms, allowing him to be hospitalized and treated.
[Image 4 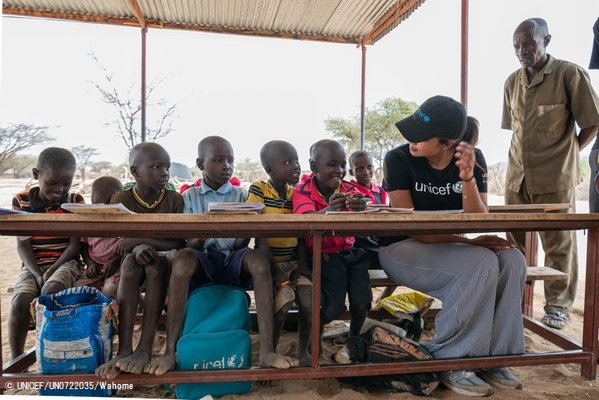 Goodwill Ambassador Priyanka Chopra Jonas sits with 4th grade students. The school is powered by a UNICEF-rehabilitated solar system that supplies water to the flowerbeds, kitchen and infirmary. (Kenya, taken on 17 October 2022) (C) UNICEF_UN0722035_W
“The reality of Kenya is that many children like Keezah are not getting the care they need and are in a very vulnerable condition. They can die not only from hunger but also from disease.This is tragic.But it can be prevented.Unless we act now, even more. Millions of children will be driven to the brink of death,” said Chopra Jonas. During his visit, Chopra Jonas also met people from Sopel village in the central Turkana county. The village of Sopel has been hit hard by the drought and some people have chosen to migrate in search of water and pasture for their livestock. In Sopel village, a well was dug using solar power, and the whole village, including the local health center and elementary school, can now use water safely.
UNICEF is distributing emergency water and hygiene kits to
drought-affected families across the Horn of Africa to enable home water treatment. We also repair and improve non-functioning wells in key locations such as villages, schools and health facilities. In addition, cash transfers are provided to vulnerable families to help with medical costs and protect children from child marriage and school dropout.
“I met a mother named Hannah Moll on this visit and was impressed with how she remained strong during this drought. They told me that they were able to stay in the village because they could use it,” says Chopra Jonas. “Hannah’s 13-year-old daughter, Celine, is now able to attend school and her youngest child is receiving immunizations and nutritional treatments at a local clinic.”
UNICEF is calling on governments, the private sector and individuals for urgent funding to combat drought in the Horn of Africa. As the situation continues to deteriorate, there is a growing need to ensure the scale and continuity of aid efforts. At the same time, UNICEF warns that more investment is needed to ensure the long-term resilience of those exposed to the recurring emergencies caused by climate change.
* * * *
■ About UNICEF
UNICEF (United Nations Children’s Fund) is a United Nations agency that works to promote the rights and healthy development of all children. Currently, in about 190 countries and regions*, we are cooperating with many partners and translating our philosophy into concrete actions in various ways. We work for all children,
everywhere, with a particular focus on helping the most vulnerable children. UNICEF’s activities are funded entirely by donations from individuals, companies, and organizations, as well as voluntary contributions from governments. https://www.unicef.or.jp/
*Includes 33 countries and regions where UNICEF National Committees (UNICEF Association) are active
■ About Japan Committee for UNICEF
The Japan Committee for UNICEF is one of the UNICEF National Committees in 33 industrialized countries and regions, and is the only private organization in Japan that represents UNICEF. advocacy). https://www.unicef.or.jp/