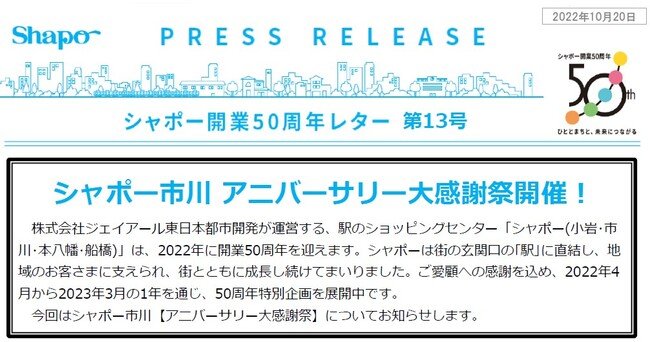 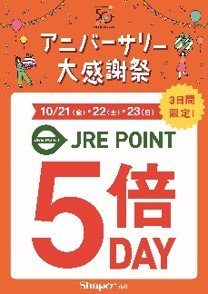 During the period from October 21st (Friday) to 31st (Monday), 2022, Shapo Ichikawa will hold the “Anniversary Big Thanksgiving” to commemorate the 50th anniversary of its opening.
From 21st (Friday) to 23rd (Sunday), a 3-day limited JRE POINT 5x day will be held!
In addition, 100 JRE POINT points will be given to those who newly create a JRE POINT card at each shop in Shapo Ichikawa during October. In addition, we will hold special events, sell 50th anniversary limited products and special sales at each shop. 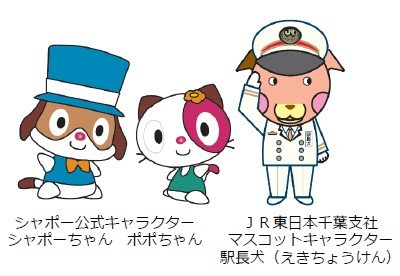 Shapo-chan, Popo-chan, Station Master Dog Petting Event
JR East Chiba branch mascot character “station master dog”
We will hold a commemorative photo session where you can take pictures with Shapo’s official characters “Shapo-chan and Popo-chan”. [Date and time] October 22nd (Sat) and 23rd (Sun)
10:00~12:00
[Venue] JR Ichikawa Station Central Exit Concourse
* Please come to the venue on the day as it will be on a first-come, first-served basis.
In addition, we will hold a station manager uniform photo session, a commemorative stamp photo spot at the station of JR East Chiba Branch, and an exhibition of toy trains.

Special Project 2. Me and Shapo – A story of coexistence with the community – Holding workshops and a limited-time market that local residents can enjoy
[Image 4

10 Jan 23 rehow
Majisemi Co., Ltd. Held a webinar on the theme of "SaaS usage screening, how to…
Uncategorized
0