Kameoka City (Mayor: Takahiro Katsuragawa) is implementing the “Zero Littering Project” jointly with SoftBank Corp. to create an
environment where it is difficult to litter. will be installed for the first time in the Kansai region on October 3, 2022.
[Image 1 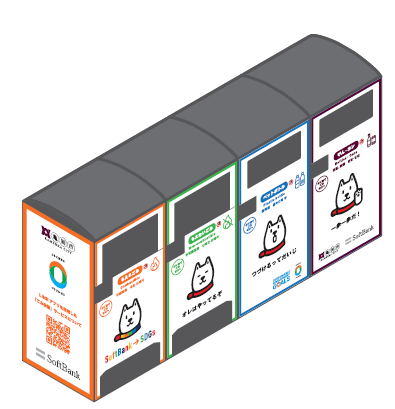 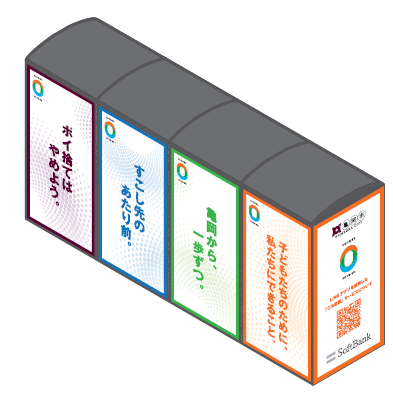 IoT trash can image (back side)
What is the Zero Littering Project?
In 2019, Kameoka City and SoftBank Corp. concluded an “Agreement on Environmental and Educational Business Collaboration.” Based on the agreement, from April 2022, we are implementing the “Zero Littering Project” as a joint project. This project collects information on littering in Kameoka City, including environmental education using Pepper, through “garbage posting” where people post information about the situation of littering in the city from the official LINE of Kameoka City.
The cutting-edge IoT trash can “SmaGO” installed for the first time in Kansai and how to use it
As a result of analyzing the garbage posted data that has been implemented since April 2022, it is easy to verify the effect before and after installation, and it is installed at the north exit of JR Kameoka Station, where there are relatively many posts and many people, and then at the south exit. set as a test. The following effects are expected from this installation.
▶Littering waste is expected to decrease.
▶Kameoka Station is often used by younger generations, leading to environmental education for the next generation.
▶It will also lead to support for the activities of Eco Walker (*) In the future, we plan to analyze littering data collected from trash posts and trash cans and install IoT trash cans in locations other than Kameoka Station.
●What is the function of the IoT trash can “SmaGO”?
(1) When a certain amount of garbage accumulates, it automatically compresses to about 1/5.
(2) Manage and analyze the amount of garbage in real time.
(3) Equipped with a solar panel, it does not require a power source and does not burden the environment.
[Image 3 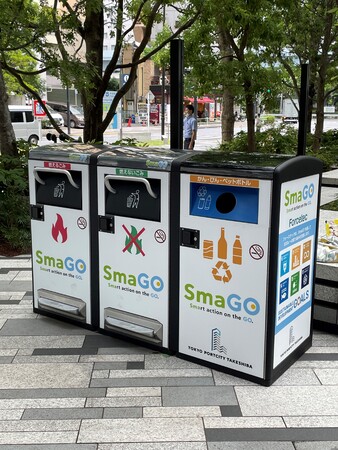 IoT Recycle Bin: In front of SoftBank Corp. Takeshiba Headquarters Building * IoT trash can “SmaGO” is developed by Forcetech Co., Ltd.
Efforts of the city
Aiming to become a world-class environmentally advanced city, Kameoka City announced the Kameoka Zero Plastic Waste Declaration on December 13, 2018 together with the Kameoka City Council, aiming to achieve zero single-use plastic waste by 2030. We are working towards. ▶Rate of citizens bringing their own bags: 98%
Enactment of the nation’s first “Ordinance Concerning Prohibition of Provision of Plastic Shopping Bags”. It has spread to citizens, and the rate of citizens bringing their own bags is 98%. (as of March 2022)
▶70% of citizens bring their own bottles, 108 free water spots Aiming to reduce PET bottles, water spots dedicated to personal bottles have been established at restaurants, public facilities, and all elementary, junior high, and compulsory education schools (as of September 2022). Since it is installed in a place where people gather, the percentage of people who bring their own bottles is high. ▶ River Friendly Restaurant Project
We operate a system to certify environmentally friendly restaurants and other stores, and 20 stores have registered and are working on environmental issues (as of September 2022).
[Image 4 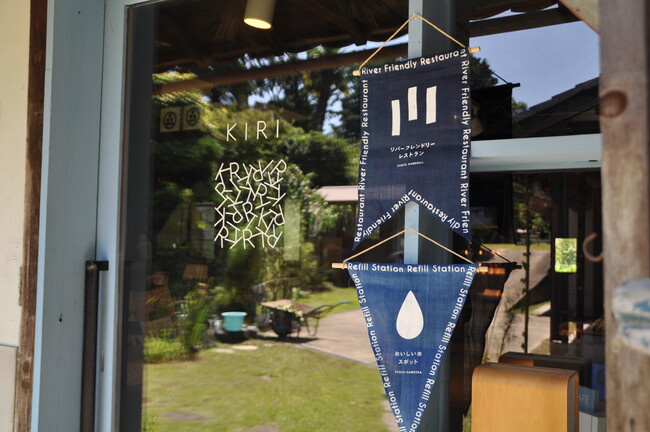 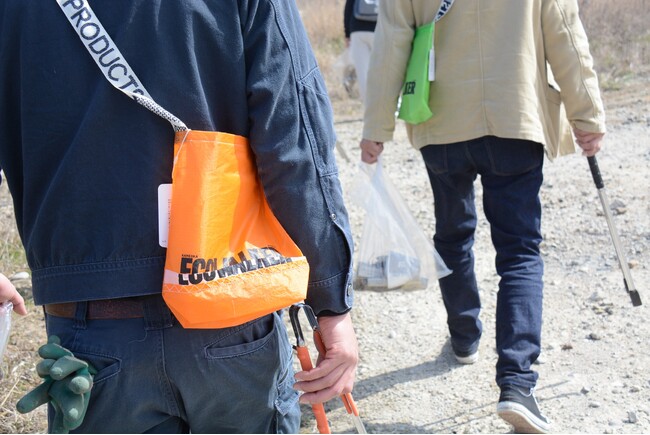 eco walker
▶Partnerships with 24 companies and organizations
We have concluded partnership agreements with 24 companies and organizations, and are working on environmental measures through public-private partnerships (as of September 2022).
Implementation of zero littering campaign
In the “Zero Littering Project”, along with the installation of IoT trash cans, we will carry out the “Zero Littering Campaign” in which LINE points can be earned when posting litter in order to collect more data on littering.
(1) Period: September 28 (Wednesday) to October 27 (Thursday), 2022 (2) Details: If you post about littering in Kameoka city, you can get up to 530 LINE points (zero garbage) per post.
(3) Participation method: Enter the photo, type, quantity, location information, etc. of littering from the garbage posting menu of Kameoka City’s official LINE account.
* Click here for details https://kameoka-city.studio.site/gomitoukou [Image 6 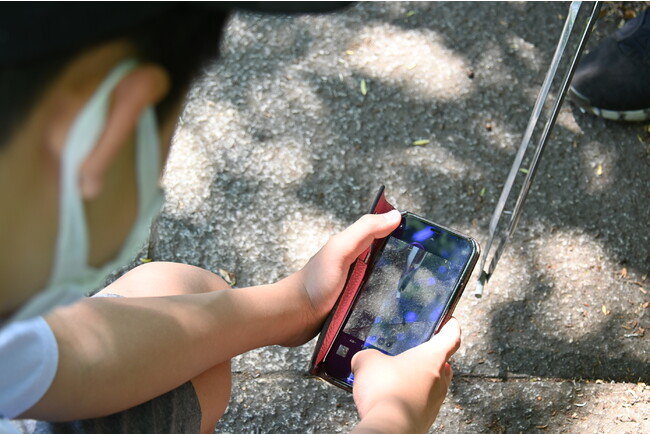 Littering zero garbage campaign
About Kameoka City
Kameoka City has the 3rd largest population in Kyoto Prefecture, and is an area that retains the charm of the countryside surrounded by rich nature while being conveniently located 20 minutes by rapid train from Kyoto Station.
Initiatives for the SDGs, including measures to realize an
environmentally advanced city, have attracted nationwide attention, and have been selected as an “SDGs Future City” and “SDGs Model Project” by the Cabinet Office. Sanga Stadium by KYOCERA will open in 2020. With the stadium as the core, we are taking on the challenge of creating a new town.
[Image 7 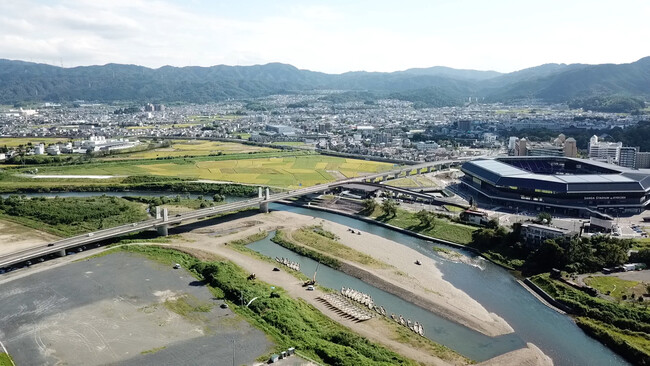 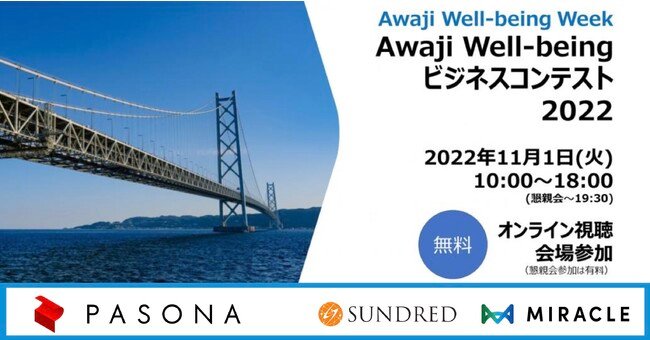