Kokonoe Town
The 2nd installment of the Magic Circle Guru Guru x Kokonoe “Dream” Large Suspension Bridge Manhole! This time, the magic circle design that appeared in the work is turned into a manhole! !

Kokonoe “Yume” Otsuribashi (Location: Kokonoe-machi, Kusu-gun, Oita Prefecture), one of the tourist facilities that represent Oita, Onsen Prefecture, has produced original manholes in collaboration with the popular comic “Mahojin Guru Guru” for the second year in a row. . This time, we have produced a manhole designed with the “magic circle that appears in the work”, which has been requested by many.
Mahojin Guru Guru × Kokonoe “Yume” About the Manhole Manhole Production Project Kokonoe “Dream” Suspension Bridge will celebrate its 15th anniversary in 2021, and as a commemoration, we have produced a manhole designed with the main characters in collaboration with “Magic Circle Guru Guru”, a masterpiece by manga artist Hiroyuki Eto from Oita
Prefecture.
[Image 1 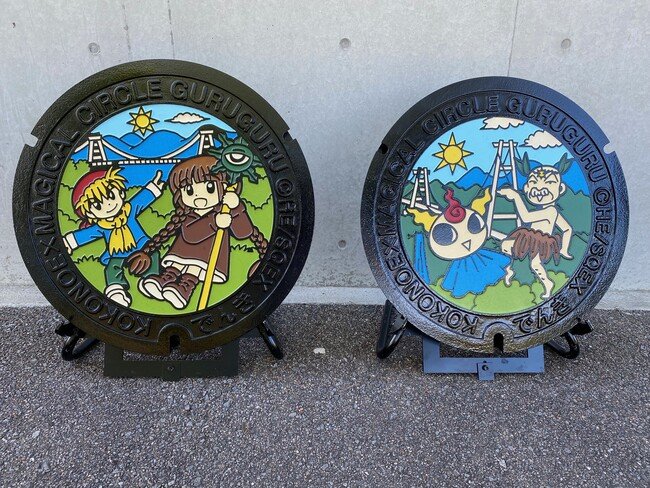 ▲ Kokonoe “Dream” Great Suspension Bridge x Magic Circle Guru Guru original manhole made in 2021. A manhole with a “Nike x Kukuri” design was installed in the Nakamura area, and a manhole with a “Gipple x Adberg Eldol (Kitakita Oyaji)” design was installed in the northern area.
At that time, we received requests from various quarters to make manholes designed with the magic circles that appear in the series. This time, it was decided to produce a manhole with a magic circle design as the second installment.
And on Saturday, October 22, 2022, two manholes were installed. [Image 2 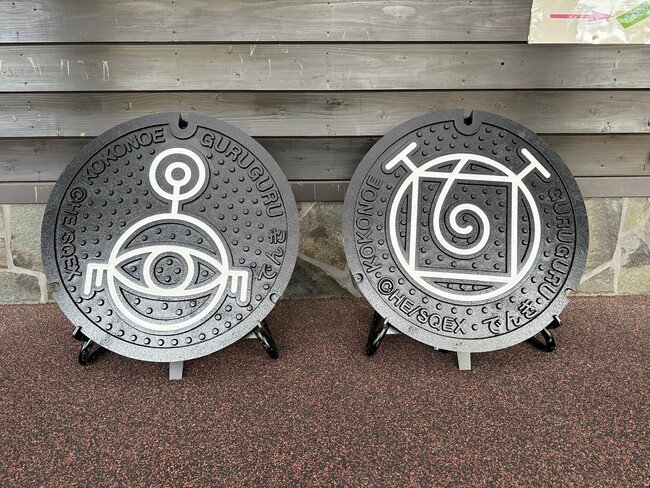 ▲ On the left is “Yonyoung Summon”, on the right is “Migumigu Gekijou” 2nd Manhole Part 1 “Summon Yong Yong”
[Image 3 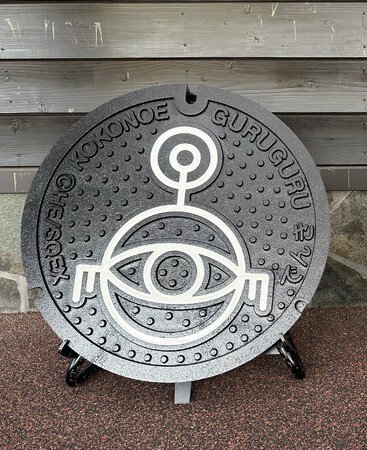 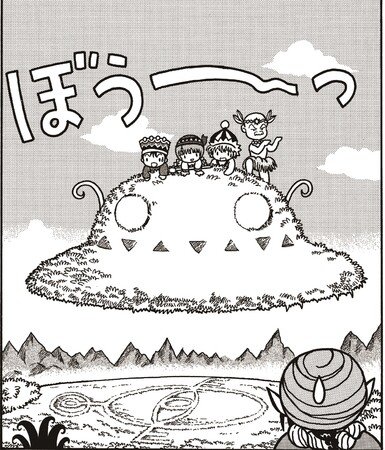 (C) Hiroyuki Eto/SQUARE ENIX
“Yonyoung Summon” is a magic circle found in Nekojita Valley. The mythical beast Yon-yeon summoned by this magic circle leisurely crossed the vast valley and carried Kukuri and the others to the Kirinashi Tower. After that, he appeared frequently and made a great contribution to Nike and Kukuri’s adventures.
Speaking of valleys, the Naruko River Valley with the Kokonoe “Yume” suspension bridge. Wouldn’t it be wonderful if you could take a ride on Yon-Yon and see the Naruko River Valley, which is rich in nature? This manhole is located at the top of the stairs in the northern area where you can see the big suspension bridge and the valley. Please also take a look at the signboard with an illustration drawn by Mr. Hiroyuki Eto, where Nike and Kukuri are happily flying in the sky. [Image 5 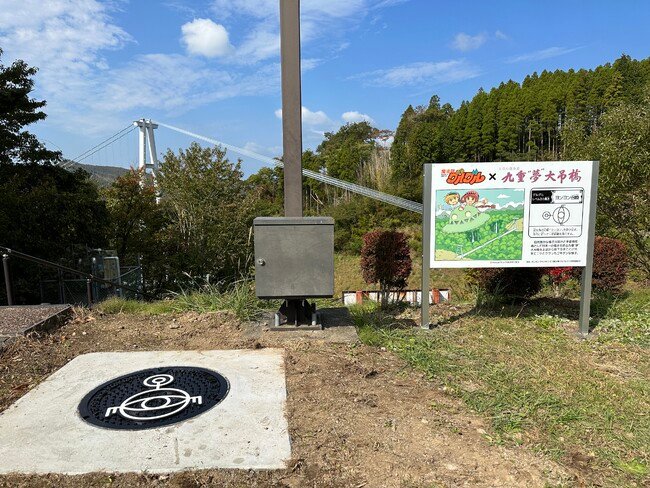 ▲ Installed at the end of the long stairs in the northern area or at the top of the large slope.
2nd Manhole Part 2 “Migumigu Gekijou”
[Image 6 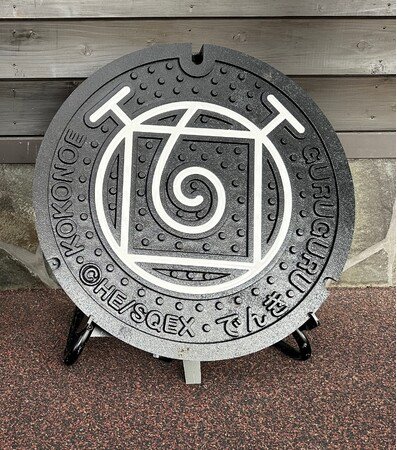 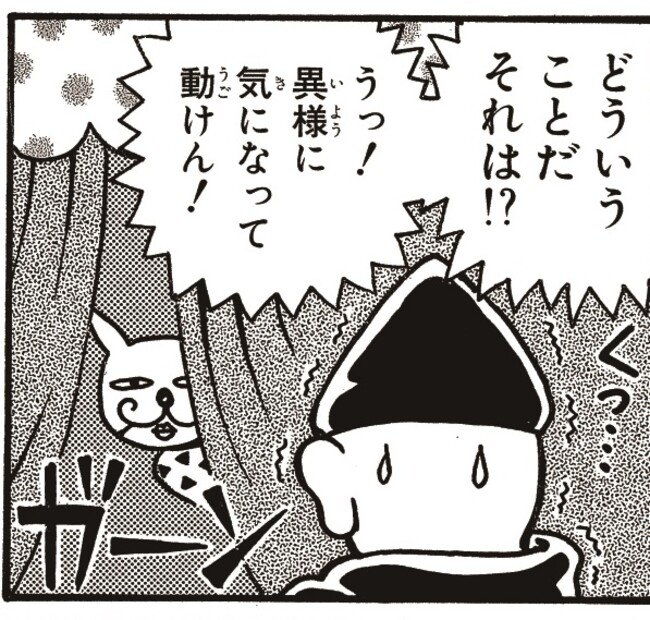 (C) Hiroyuki Eto/SQUARE ENIX
“Migumigu Gekijou” gave an unprecedented impact during the work. A play with a strong peculiarity stops those who have seen it. The town of magic, Arahabika, was a magic circle that played an important role in the story, as it was an illusionary play created by this “Migumigu Gekijo”.
As Kokonoe Town promotes stay-type tourism, the Kokonoe “Yume” Otsuribashi Bridge has been turned into a manhole with the hope that it will become one of the spots where visitors tend to stop. This manhole was installed in the Nakamura area where there is a direct sales store. It’s a little hard to find, so it might be interesting to try to find out where it is. At that time, please be careful not to enter the restricted area.
[Image 8 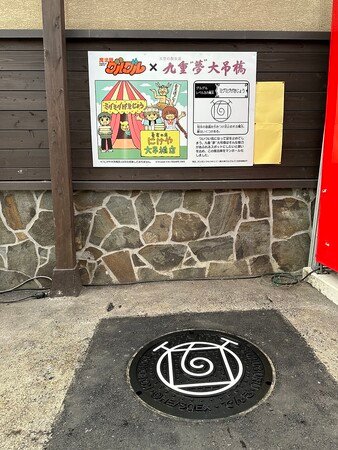 ◀Installed between buildings in the Nakamura area. Please be careful not to overlook it. If you can’t find it, please contact the tourist information center inside the facility.
Message from Professor Hiroyuki Eto
Hello, this is Hiroyuki Eto, the author of “Magic Circle Guru Guru”. Continuing from the last time, I am very happy that the two magic circles of the magic circle Guru Guru have been turned into a manhole in the land of Kusu-gun where I played in my boyhood.
It was also in this land of Kusu that I drew my first magic-themed painting when I was about eight years old.
Today, this inspiration has turned into a magic circle and returned to Kusu. May the magic circle manhole continue to be an existence that gives you dreams…!
Last but not least, I would like to express my gratitude to all the people involved who worked hard to advance this project.
Thank you very much.
Hiroyuki Eto
A manhole that is not only fun to look at, but also tells a story In recent years, original manhole covers designed with popular anime and famous local items have become a hot topic. I wondered if Kokonoe Town could do something about it, so there was a manhole jointed by Kokonoe “Yume” Otsuribashi, which boasts the highest height in Japan (as a pedestrian bridge), and “Magic Circle Guruguru” drawn by Hiroyuki Eto, a teacher from Oita Prefecture. I thought it would be fun, so I started this project.
What I was careful about in this manhole project was to carefully create a “story where the manhole is there.” For example, last year’s work “Gipple x Adbergh Eldor (Kitakita Oyaji)”, the Naruko River Valley where the Kokonoe “Yume” Suspension Bridge spans is a place where a refreshing breeze blows. ) I chose Kita Kita Oyaji with the wish to bring good luck to the area.
[Image 9 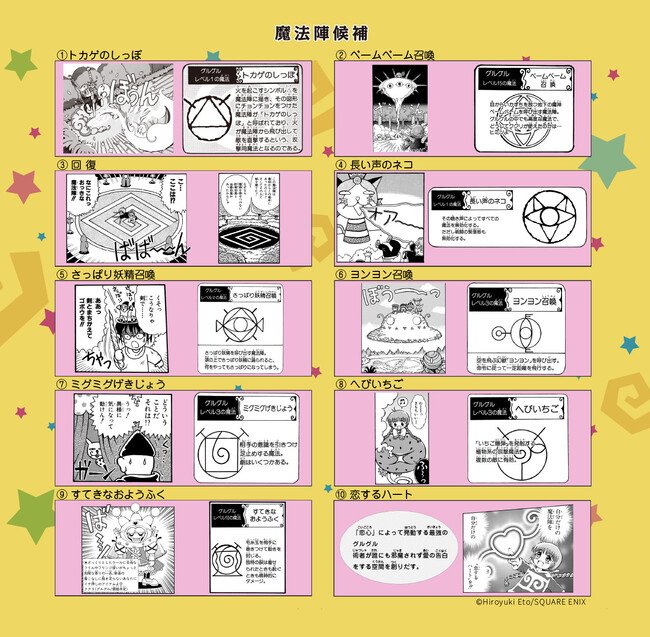 This time, we held a quiz project in advance, asking “Which magic circle will be turned into a manhole?” Ten options are prepared, and two of them are manholes. Looking at the postcards I received, I got the impression that many people answered “lizard’s tail”, “böhm böhm summoning”, “long-voiced cat”, and “heart in love”. Of course, I thought that it would be better to turn the well-known and popular magic circle into a manhole for a catchy and easy-to-understand form that would be well received. However, when I thought about what would be able to create a story that would say, “If you’re going to use Guruguru on the Kokonoe ‘Dream’ Great Suspension Bridge, this is it.” It was “Gekijo”.
When I announced the correct answer to the quiz, some people said, “Is there anyone who got this right?” The reason for choosing that magic circle is written on the signboard installed near the manhole, but the illustration drawn by Mr. Hiroyuki Eto, who stirs the imagination, plays a role in conveying the story more deeply. .
What we expect from the original manhole cover in partnership with Mahoujin Guru Guru is to let more people know about this large suspension bridge through “Maho Jin Guru Guru”, and to have more people visit and create fun memories of their trip. In addition to that, I hope that it will evoke a tour of original manhole covers in Oita Prefecture and Kyushu, as well as a pilgrimage to anime and manga sacred places.
In addition, “Magic Circle Guru Guru 2” is currently being serialized on Gangan ONLINE. I’m sure there are people who don’t know that Nike and Kukuri are still having exciting adventures, so I’d be happy if I could help spread the word.
[Image 10 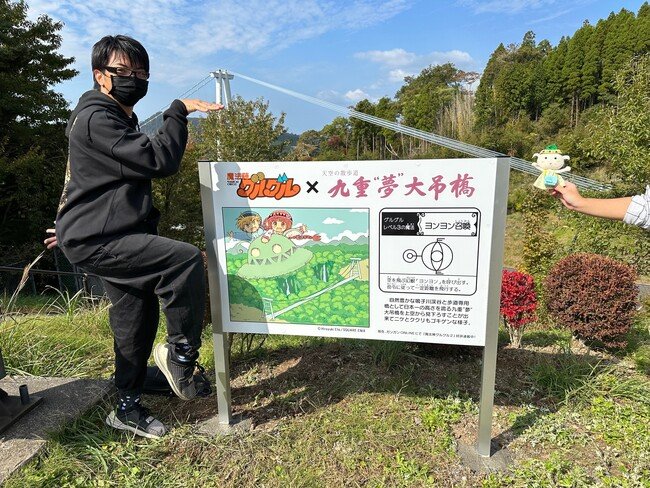 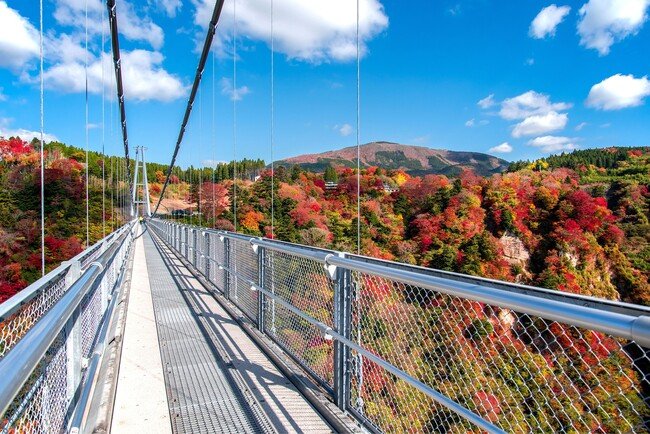 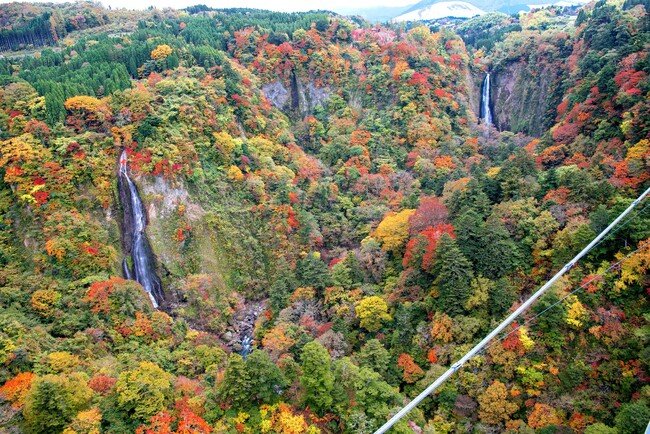 ▲From the top of the bridge, you can see Shindo Falls, Otaki (back right) and Medaki (left), which are one of the top 100 waterfalls in Japan.
What is “Magic Circle Guru Guru”?
“Magic Circle Guru Guru” is a legendary gag fantasy comic by Hiroyuki Eto that was serialized in the monthly magazine “Shonen Gangan” from 1992 to 2003.
[Synopsis]
The legend of the strange mythical beast “Guru Guru” passed down in a small village…
It was the only clue to seal the resurrected Demon King.
Nike, a boy raised by his father, who is a hero maniac, and Kukuri, a Migu Migu tribe girl raised by a magical obaba.
When the two meet, a mysterious magical power is activated, opening the door to an epic adventure full of laughter and excitement…! ! From 2008 to 2012, the spin-off work “Maiyuden Kitakita” was serialized, and from 2012 to the present, the sequel “Magic Circle Guru Guru 2” was serialized in “Gangan ONLINE”.
[Image 13 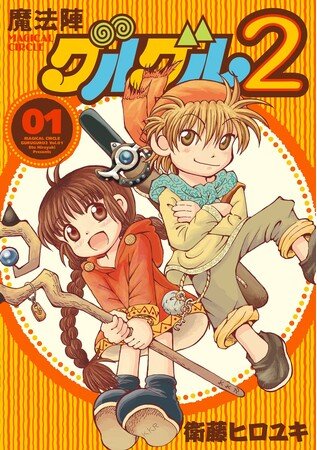