Marvelous Co., Ltd. (President: Suminobu Sato / Location:
Shinagawa-ku, Tokyo) announced that a new weapon will be released on October 26, 2022 (Wednesday) in the full-fledged online RPG for smartphones “Logres of Swords and Magic: Ancient Goddess”. We are pleased to inform you that we have updated the lineup, including the sale of the “Job-specific Magical Cat Rate Up Gacha” and the holding of the event “Gokai! Gaia Gym”.
[Image 1 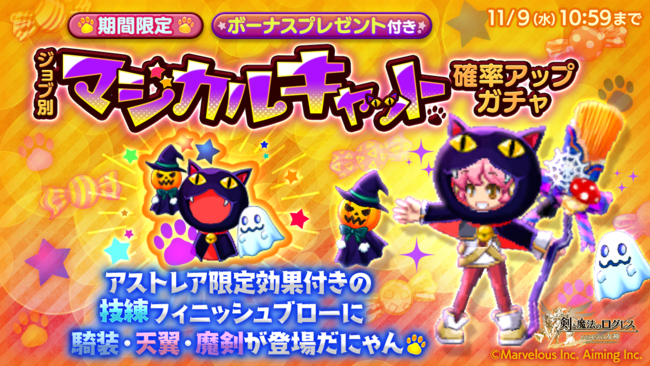 During the period, we will sell “Magical Cat Probability Up Gacha by Job”. The limited-time weapon “Magical Cat” series is now available in 6 weapon types, including cavalry, heavenly wings, and magic swords! In the style of a cute black cat witch, unleash a final blow with a skill skill that gets stronger each time you attack!
With a limited effect, it is also very active on the Astraea continent★ [Period] Until 2022/11/9 (Wed) 10:59
■ Bless the transcendence buff with limited-time MB weapons! “Job-specific Xmas model Odin probability increase gacha” now on sale! [Image 3

During the period, we will sell “Xmas model Odin probability up gacha by job”. MB weapon Xmas model Odin has super multi-stage & super powerful attack buffs for each weapon type, and the first swing increases the effect of attack buffs!
The charge time is 3 seconds, so you can use it at any time according to your purpose, such as adding buff effects or recovering HP/EP. Don’t miss the powerful and cute limited-time weapons!
[Period] Until 2022/11/2 (Wed) 10:59
■Aim for a muscle body! ? “Exciting! Gaia Gym” held!
[Image 4

During the period, we will hold “Gokai! Gaia Gym”.
“Hero Gaia’s Helmet -Earth God-” and “Ultimate Gaia’s Armor
(Upper/Lower) -Earth-” can be increased in rare rank!
By raising the rarity rank, additional effects according to the amount of earth attribute mana and the number of mana will be added. Collect event-exclusive materials to create and enhance Gaia equipment! [Period] Until 2022/11/8 (Tue) 23:59