Matsudo City Hall
[Event Report] “Matsudo Fan Festa in Terrace Mall Matsudo” Athletes and artists related to Matsudo interact with citizens A variety of performers mesmerize the audience with spectacular performances!
For three days from September 23rd (Friday/holiday) to 25th (Sunday), the “Matsudo Fan Festa”, an exchange event between citizens and athletes and artists related to Matsudo City, will be held at the city’s large commercial facility “Terrace Mall Matsudo”. was held at At the event, world-famous BMX professional rider Hajime Sasaki who lives in Matsudo City, Rio de Janeiro Paralympics, Tokyo 2020 Paralympic Wheelchair Rugby Japan national team Masayuki Haga who won two consecutive bronze medals in wheelchair rugby, and a 4-member rock band from Matsudo City. Various performers such as “TENDOUJI” and professional sports teams such as rugby NEC Green Rockets Tokatsu and basketball Chiba Jets will appear.
A total of 3,400 people visited over the three days, promoting the city’s sports culture, creating opportunities for citizens to experience sports, inheriting the legacy of the Tokyo 2020 Olympic and Paralympic Games, and promoting citizen love for their hometown. We tried to cultivate and increase the number of fans who are interested in Matsudo.
The event is also posted on the city’s website.
[URL] https://www.city.matsudo.chiba.jp/miryoku/fanfesta/2022_report.html [Image 1 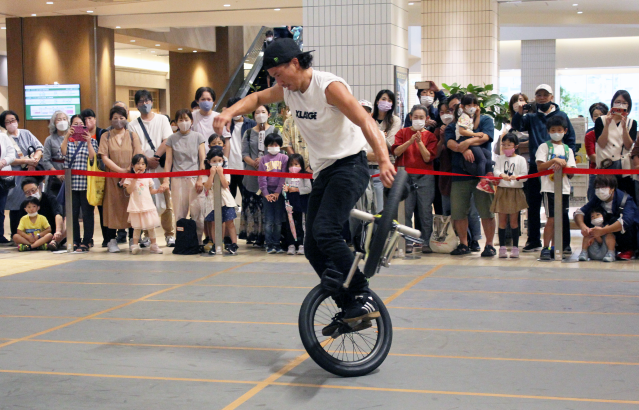 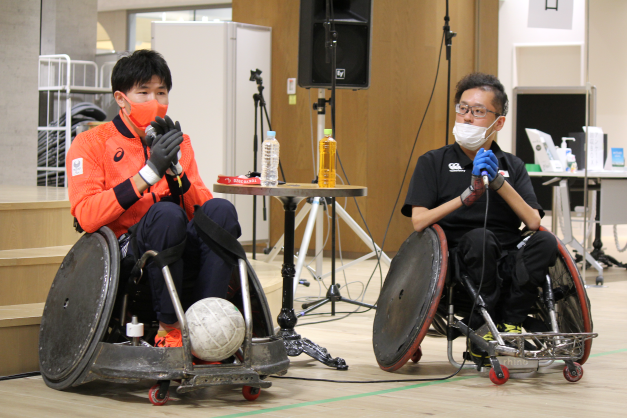 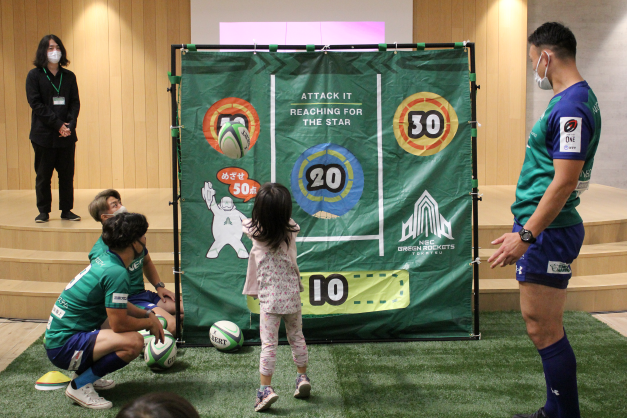 -September 23 (Friday/holiday)-
The opening of the festival will be TENDOUJI acoustic live, a rock band from Matsudo city.
[Image 4 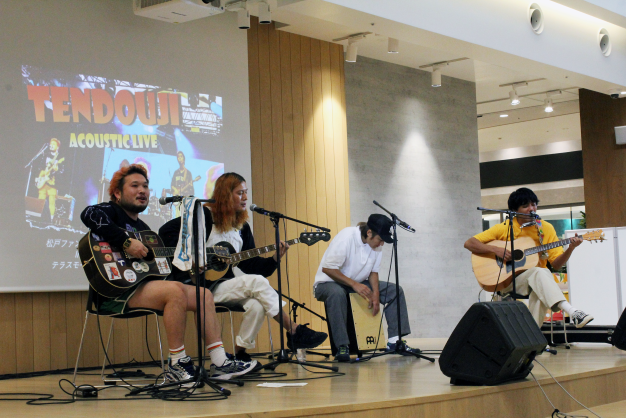 “Matsudo Fan Festa in Terrace Mall Matsudo” will start with an acoustic live performance by TENDOUJI, a four-member rock band from Matsudo City. Unlike the usual rock taste, all 8 songs arranged acoustically fascinated the fans who gathered.
The vocalist, Kenji Asano, introduced himself by saying, “We are a band from Shin-Matsudo Kita Junior High School.” At the first live performance in his hometown, he said, “I think Matsudo is really good.” “I want to hold a festival in the forest and square of the 21st century someday. Let’s meet again!”
■ World-renowned professional riders Sasaki, Shoji, and Kawaguchi’s spectacular performances filled the venue with excitement
[Image 5 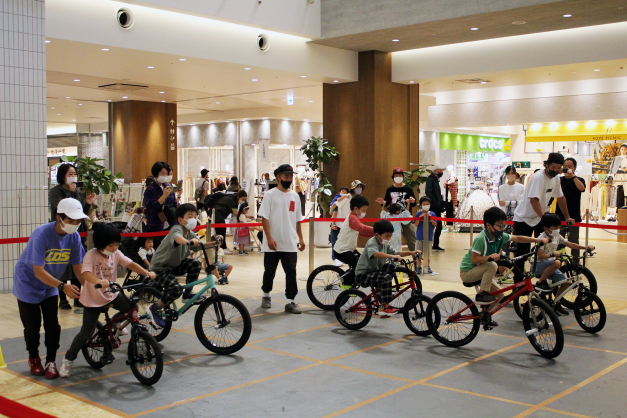 A BMX stage performance followed. On stage, world-famous professional riders Hajime Sasaki and Yu Souji, who live in Matsudo City, and young hopeful Sakurai Kawaguchi appeared on the stage. When they performed a masterpiece in front of a large audience, they received a big round of applause from the audience. At the BMX experience session that followed, the children who participated experienced the fun of BMX with their eyes sparkling.
About performing at the event, Sasaki said, “For more than 20 years, I have practiced in front of Morino Hall 21 and received support from the citizens, so it is special to be able to perform in my hometown. However, it was an even more spirited show. Shoji also succeeded in a big move that he had never scored in a competition. I was the one who enjoyed it the most, but I would be happy if the people who came to see it were happy.” Mr. Kawaguchi commented, “I decided to start BMX because I saw a show by a former athlete and Mr. Shoji, so I’m happy to be able to do a show with them.” I was. Children who saw BMX for the first time said, “It was fun” and “I want to try BMX,” and the appeal of BMX was fully conveyed on the stage.
-September 24th (Sat)-
Wheelchair rugby players Yoshiyuki Haga and Takayoshi Norimatsu talk in harmony [Image 6

At the beginning of the talk show, Noriyuki Haga and Takayoshi Norimatsu, two consecutive bronze medalists of Japan’s wheelchair rugby team at the Rio de Janeiro Paralympics and Tokyo 2020
Paralympics, performed wheelchair rugby tackles. The audience roared with applause at the sound of the wheelchairs colliding with each other. The talk show, which was a shocking start, included commentary on the highlights and rules of wheelchair rugby, along with passing demonstrations, and a talk in harmony with the MC.
At the talk show held in his hometown of Matsudo, Haga said with a smile, “Matsudo is my hometown, and I went to Senshu University Matsudo High School, so I’m happy to have this opportunity in Matsudo.” Regarding the appeal of wheelchair rugby, Norimatsu said, “I’m a DF (defender), so it’s a pleasure to stop an opponent’s ace player. I want people to pay attention to that kind of play.” When asked about the reaction after the Paralympics, Haga said, “The Paralympics have increased attention.” Norimatsu said, “Children in particular responded strongly. The number of positive reactions has increased.” In the second half of the talk show, Tomoaki Imai, a Japanese wheelchair rugby player who came to see the two of them for the first time in a while, made a surprise appearance on stage, and the venue was very lively. Haga, who finished the talk show, commented, “I would be happy if people could feel a sense of familiarity and interest through this kind of event, and it would be an opportunity to go to the game.” Mr. Norimatsu commented, “I’ve lost school visits due to Corona, so I’d be happy if it became a place to think about disabilities.”
The performance of the Matsudo City Fire Department Band, the Shibuya Picture Story Show, and the boccia experience were a great success. [Image 7 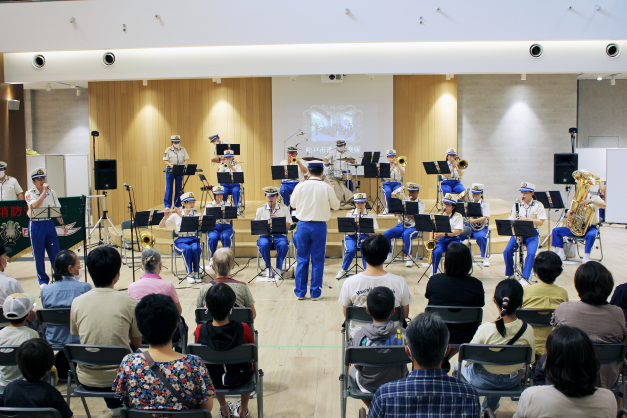 The Matsudo City Firefighting Band performed a total of 6 songs at the opening of the second day of the festival. An intro quiz was held between the performances, and both adults and children listened intently and showed serious expressions. Those who answered correctly were presented with original goods from the Fire Department. At the climax, the venue was wrapped in a big applause. In the parasports picture-story show by the Shibuya Gekidan, the children
enthusiastically participated in a quiz about parasports such as wheelchair rugby and boccia, and the world of the picture-story show unfolded.
[Image 8 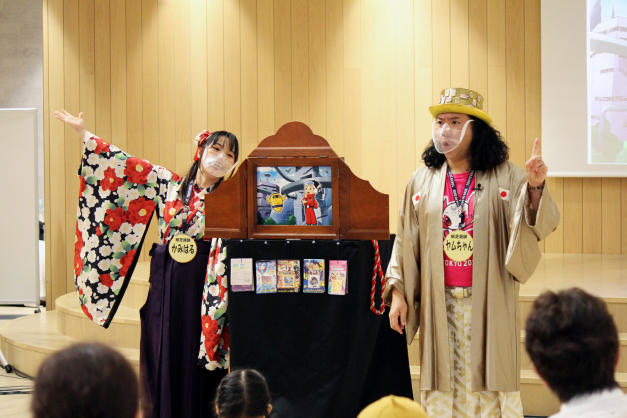 Adults also enjoyed the world together. Mr. Haga and Mr. Norimatsu, who appeared in the talk show, also participated in the last program boccia experience session of the day. Experience boccia together, such as playing against children. After that, many people from small children to adults participated in the trial session. In the survey of the boccia experience session held at the venue, most of the answers were “I didn’t know” or “I knew about it, but I had never tried it”. It was fun,” and “it was a good opportunity to learn about boccia.” [Image 9 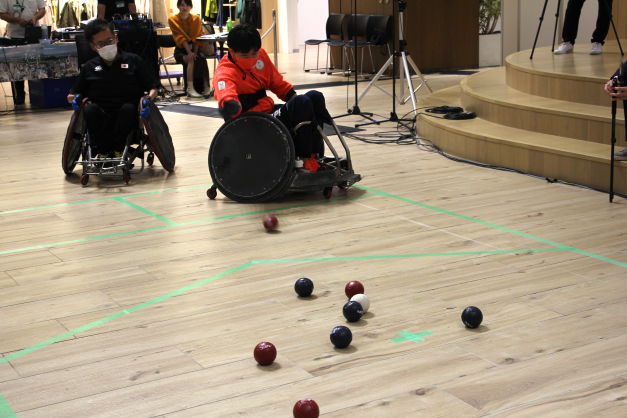 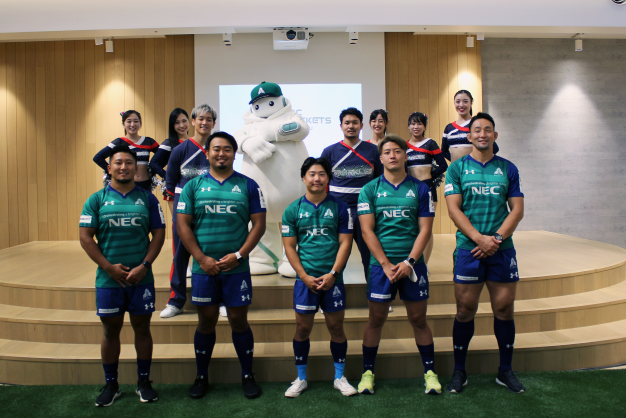 When he came, the excitement of the venue reached its peak when he caught the ball from the lineout. Children were able to participate in the line-out and actually experience it, and they enjoyed interacting with the players with smiles. Afterwards, a tackle experience, a pass experience, and a commemorative photo with the players and “SPARKLES” were held, and the venue was very lively. Hosoda, who participated in the Matsudo Fan Festa, said, “It was fun for the children, and we also enjoyed it. It’s been a long time since we couldn’t do this kind of event because of the coronavirus. I would like to create more opportunities like this,” he commented. Ishida said, “As a team, we will do our best with the goal of making it to the top 8. We have a lot of games this year, so if the people of Matsudo give us a lot of support, we can turn it into our strength, so please come to the venue. We are waiting for you!”, sending a passionate message to the citizens of Matsudo.
■Kids cheerleaders also appeared at the Chiba Jets fan exchange event, creating a homey atmosphere
[Image 12 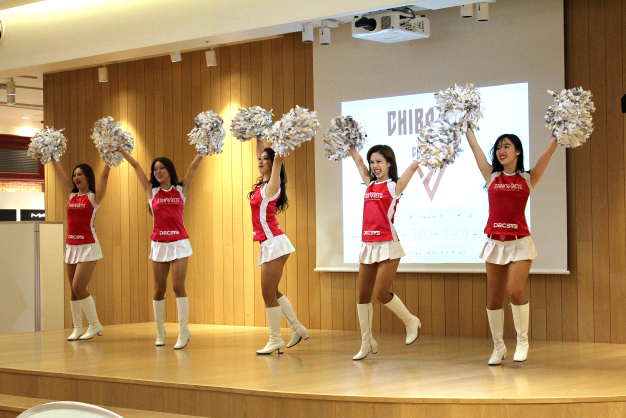 Chiba Jets Flight Crew Cheerleaders “STAR JETS” appeared at the Chiba Jets fan exchange event. We held a cheer performance on stage and a free throw experience session. During the “STAR JETS” performance, there was a scene where they danced the choreography together with the audience, and the venue was very lively. “Cheerleading school students” also appeared on the stage. The audience gave warm applause to the future cheerleaders who performed brilliantly.
[Image 13 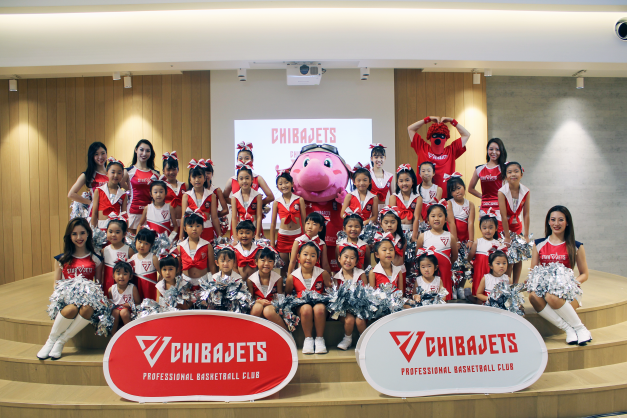