Pro Wrestling Noah came up with a Kumamoto support project based on the desire of Kumamoto-born wrestler Seiki Yoshioka, who wants to support Kumamoto, which is still in a difficult situation after being severely damaged by the earthquake and torrential rain. Along with Noah’s wrestlers Atsushi Kotoge, YO-HEY, and Alejandro, Kumamon, the sales manager and happiness manager of Kumamoto Prefecture, directly negotiated to participate in this project. With the willing consent of Kumamon, a charity project to support Kumamoto reconstruction will be held from September 15th Korakuen Tournament “STAR NAVIGATION 2022” to October 14th (Friday) Kumamoto Tournament “SUNNY VOYAGE 2022” (Venue: Kumamoto Castle Hall Civic Hall) Until then, we set up a donation box to support Kumamoto reconstruction.
In addition, as charity goods in collaboration with Pro Wrestling Noah and Kumamon, we are planning a “charity can badge set” and “charity face towel”.
Sales have started at the venue of the Kumamoto tournament and at Kumamon Square, Kumamon’s activity base in Kumamoto City.
At the Kumamoto Support Project Ceremony held prior to the tournament, Seiki Yoshioka, Atsushi Kotoge, YO-HEY, and Alejandro of the junior regular army entered the ring, followed by the Kumamon Group’s Kumamoto Governor’s office. Manager Waki ​​and Kumamoto Prefectural Sales Manager and Happiness Department Nagamamon were scheduled to appear on stage, but when it was suddenly announced that Kumamon’s arrival at the venue was delayed, there were rumors that he was Kumamon’s friend as a pinch hitter. A mysterious professional wrestler, “Hinokuni Kumamoto Mask” appears.
[Image 1 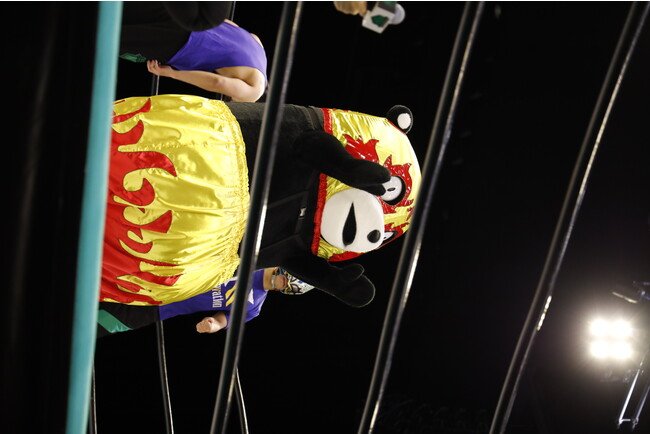 The ring announcer introduced the profile of Kumamoto Mask, the Land of Fire, and then Mr. Yoshioka handed the “Kumamoto Support
Fundraising” to Mr. Waki.
[Image 2 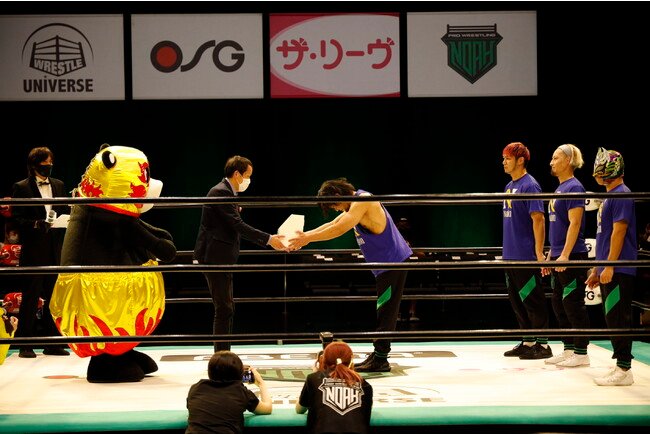 Mr. Yoshioka said, “I know that Kumamoto has been severely damaged by earthquakes and torrential rains in the past few years and is still in a difficult situation. I consulted with the company that I wanted to support Kumamoto somehow. I want to liven up the event. I want you to cooperate.”
“Kumamon seems to be a little behind, but Kumamoto Mask, the Land of Fire, will continue to liven up Kumamoto together,” said one comment. Kuma.
[Image 3 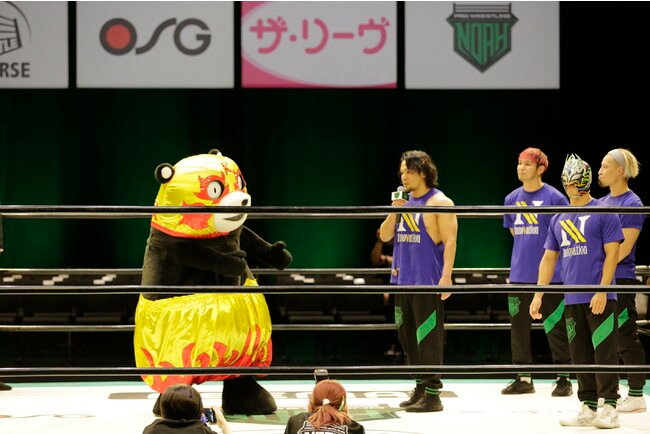 After that, a commemorative photo was taken, and finally, Kumamon’s dance song “Kamamon! Kumamon!”
[Image 4 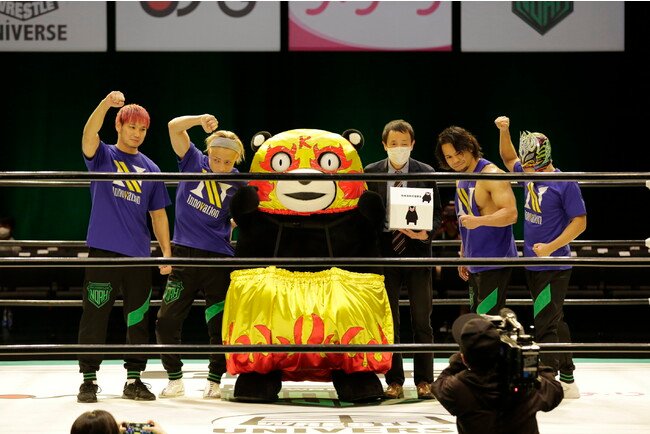 Kumamon, who has been flying around the country, appeared in time for the 10-man tag team of the Kumamoto tournament main card, in which Seiki Yoshioka will participate.
When he entered the venue with Seiki Yoshioka, Atsushi Kotoge, and Daiki Inaba, he stepped into the ring, presented a bouquet, and cheered.
[Image 5 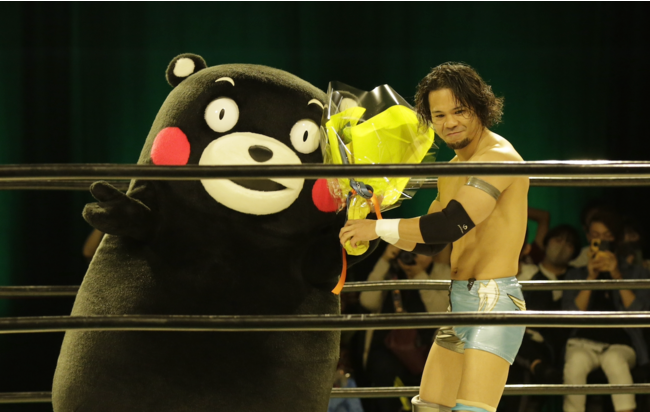 ● Outline of Kumamoto Reconstruction Charity Project
1. At the Pro Wrestling Noah tournament held from 9/15 (Thu.) to 10/14 (Fri.), a donation box will be set up to support the reconstruction of Kumamoto.
2. Charity goods will be sold at the Kumamoto tournament “SUNNY VOYAGE 2022” venue on October 14 (Friday) and at Kumamon’s activity base “Kumamon Square”.
Contents of charity goods
Charity can badge set (2 pieces)…¥1,000 (tax included)
Jumbo size can badge.
A design that conveys the burning heart of Kumamon!
[Image 6 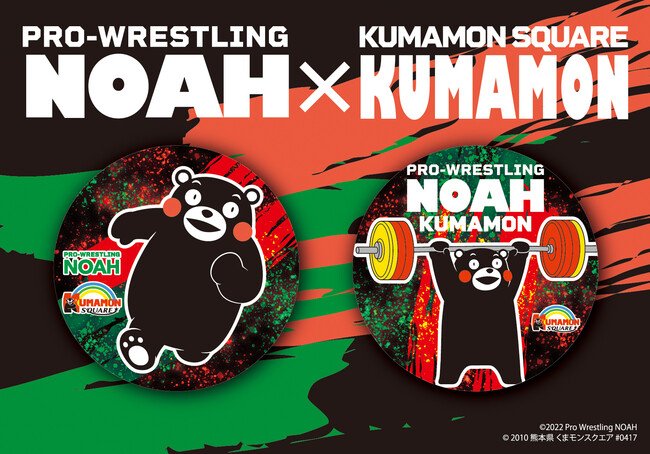 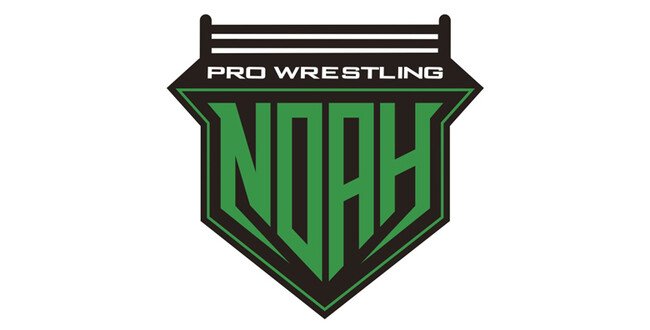 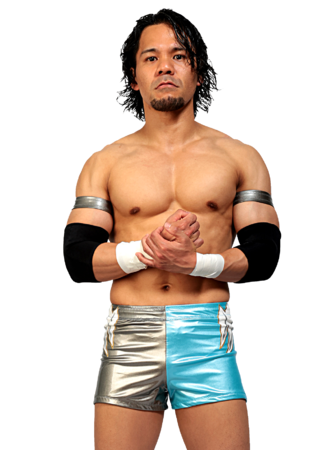 -Seiki Yoshioka profile-
Date of birth: January 5, 1988
Height: 170cm Weight: 77kg
Birthplace: Kumamoto City, Kumamoto Prefecture
Studied at Okayama University Faculty of Pharmaceutical Sciences and qualified as a pharmacist.
From the day after admission, he entered Wrestle Gate, a group in Fukuyama City, Hiroshima Prefecture, presided over by former Michinoku Pro Wrestler HANZO, and continued his studies and professional wrestling in parallel even after his debut.
In 2013, he decided to transfer to All Japan, but he joined WRESTLE-1, which was established immediately after.
Grow as a leader in the cruiserweight (junior heavy).
After the WRESTLE-1 Korakuen Tournament match held without spectators on April 1, 2008, he declared his withdrawal from #STRONGHEARTS and appeared in Pro Wrestling Noahmat as a new member of the Sugiura Army in the TV match on April 18.
Yoshioka, who seems to have a variety of footwork, top-class speed in the junior heavyweight division, and a high flyer, always aims for even higher junior heavyweights with his motto “Not Enough”. -About Kumamon-
In 2010, he became Kumamoto Surprise Ambassador Extraordinary and Plenipotentiary, and in 2011, he became Kumamoto Prefecture Sales Manager, and in 2014, Kumamoto Prefecture Happiness Manager. Kumamon is very busy with visiting the Emperor and Empress at that time. Overseas “business trips” to China, Hong Kong, Taiwan, France, the United States, Thailand, etc., gaining popularity not only in Japan but all over the world.
In July 2013, the activity base “Kumamon Square” opened in the central area of ​​Kumamoto City. As a sacred place for domestic and foreign fans, the number of visitors reached 3 million on August 27, 2020. The annual sales of products using Kumamon in 2021 will be 154.6 billion yen, and the cumulative sales since the start of the survey in 2011 will be 1,134.1 billion yen, exceeding the target of 1 trillion yen.
[Image 10

7 thoughts on “Nippon Columbia Co., Ltd. Teamed up with professional wrestling Noah Kumamon to hold a charity event to support the reconstruction of Kumamoto. Donate “Kumamoto Support Fundraising” at the Kumamoto Tournament on Friday, October 14th!”