Nishimura Bookstore Co., Ltd.
60 years since its publication. “The Rachel Carson Story”, a biographical picture book about the life of the author of “Silent Spring,” a best-seller about environmental issues that has been read for generations, will be released on October 6.

Nishimura Shoten (Chiyoda-ku/President Masanori Nishimura) said, “The story of Rachel Carson Why did the birds disappear? ] was released on October 6th. The Rachel Carson Story
Listen to the voice of nature and live with nature.
Important things that Rachel taught me.
Even if you don’t know the name “Rachel Carson”,
When you hear about the author of “Silent Spring,” many people will probably immediately click on it.
After World War II, chemicals began to be used in large quantities due to rapid economic development.
about the dangerous impact on ecosystems,
“Silent Spring” is said to have sounded the alarm for the first time. As soon as it was published in the United States in 1962, it greatly shook public opinion,
It became the bible of the subsequent environmental protection movement. Listen to the voice of the forest, the voice of the sea, the voice of the creatures,
Rachel raised her voice to raise the issue with her courageous action. What kind of person was she?
paved the way for environmental protection
A biographical picture book about the life of Rachel Carson. When I was a girl, I interacted with various creatures. Eventually, I want to be a biologist.
[Image 2

“The Rachel Carson Story” Spread Sample 1
After writing a book on the sea, he became a best-selling author. [Image 3

“The Rachel Carson Story” Spread Sample 2
Hearing the voiceless cries of the creatures, Rachel summoned the courage to call out the danger.
[Image 4

“The Rachel Carson Story” Spread Sample 3
words of recommendation
The power of the soil that you feel in the field work, the excitement of getting a fruitful harvest.
If they are in me, there will be things I have to think about, Asked again by Rachel.
— Sanae Uchida, Yellow Home Farm, Village of Picture Books and Roses Now is the time for many children to meet Rachel and think about ways to get along with living things.
Study whatever you want to know,
Please learn from this picture book the importance of having the courage to tell your story.
――― Hitomi Asahi, Association for the Promotion of SDGs with picture books An event commemorating the 60th anniversary of the publication of “Silent Spring” was held. -Date: October 1, 2022 / Organizer: Rachel Carson Japan Association Kanto Forum-
At the event, Keiko Nakamura, a biohistory researcher, gave a lecture titled “The Sense of Wonder Teaches ‘Another Path’ – From the Perspective of Biohistory.”
Mr. Nakamura and Ms. Keiko Kamito, the supervisor of this book and president of the Rachel Carson Japan Association, had a conversation. * Click here for the event report → Nishimura Shoten note
https://note.com/nishimurashoten/n/n5327dc7a635b
*Rachel Carson Japan Society website: http://j-rcc.org/
Author/Supervisor/Translator Profile
Written and illustrated by Stephanie Roth Sisson
An illustrator who has created illustrations for many picture books and children’s books. When I was a child, I was moved by reading Rachel Carson’s books, and I am still influenced by Carson as a writer and painter. His works include Children of the Stars: Dr. Carl Sagan and the Wonders of the Universe. Lives between Florida, USA and Mauritius.
Supervision Keiko Kamito
Essayist, President of the Rachel Carson Japan Society. Graduated from Tokyo University of Pharmacy. After working in a laboratory and as an editor of an academic journal, he has reached his current position. Many of Carson’s works and biographies have been translated, including “Beach Life,” “Under the Sea Breeze,” and “Sense of Wonder.” She has supervised books such as “Rachel Carson from the age of 13” and “Rachel Carson: Words to Live Now”. Born in Tokyo.
Translated by Noriko Ohtsuka
Born in Fukushima Prefecture and raised at the foot of a green mountain. A camper who loves nature. Translated books: “The Story of a 100-Year-Old Runner: Fauja Who Never Gave Up on Her Dreams”, “My Family, Everyone’s Family”, Authored “Infectious Diseases and the History of Humankind” in 3 Volumes (Received the 24th School Library Publication Award) and so on. Director of the Japan International Council for Children’s Books (JBBY) and a member of the Yamaneko Translation Club.
Bibliographic information
■Title: The Story of Rachel Carson Why did the birds disappear so quickly? Written and illustrated by Stephanie Ross Sisson/supervised by Keiko Kamito/translated by Noriko Otsuka
■ Publication date: October 4, 2022 ■ Release date: Around October 6, 2022 (The release date will depend on how the book arrives at the store.)
■ ISBN: 978-4-86706-040-7 ■ List price: 1815 yen (1650 yen + tax) ■ Format: A4 variant (horizontal length), high quality
■ Number of pages: 38 pages ■ Kanji used for everyday use / furigana for all kanji
■Issuance/Sales: Nishimura Shoten
■ Sales locations: Bookstores nationwide, online bookstores, etc. ・ Amazon: https://www.amazon.co.jp/dp/4867060402/
・ Rakuten Books: https://books.rakuten.co.jp/rb/17274011/
・honto: https://honto.jp/netstore/pd-book_31942967.html
・ Kinokuniya Bookstore: https://www.kinokuniya.co.jp/f/dsg-01-9784867060407 ■ Nishimura Shoten HP product page
http://www.nishimurashoten.co.jp/book/archives/18345
Thinking about the future of the earth – SDGs visual book – set (3 volumes in total)
[Image 5 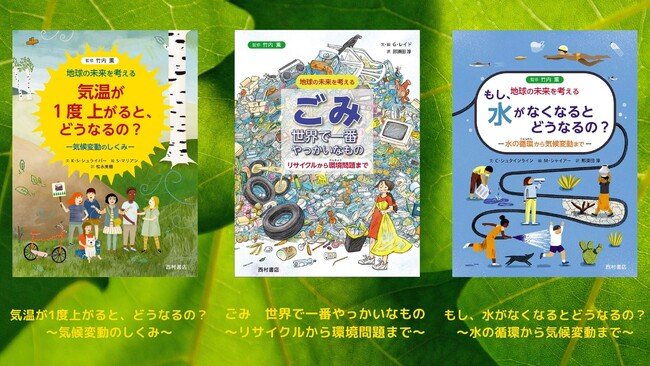 One thought on “Nishimura Shoten Co., Ltd. 60 years since publication. “The Rachel Carson Story”, a biographical picture book about the life of the author of “Silent Spring,” a best-seller about environmental issues that has been read for generations, will be rele”