CARRY ME (operating company: Piece to Peace Co., Ltd., head office: Chiyoda-ku, Tokyo, CEO: Ryo Osawa), which provides a matching service between companies and “professional personnel” with specialized skills and experience, and We are pleased to announce that Maenomery Co., Ltd. (hereinafter referred to as Maenomery, Headquarters:
Shinagawa-ku, Tokyo, President: Takashi Hoshino), which develops career support for athletes as its main business, has formed a business alliance.
[Image 1 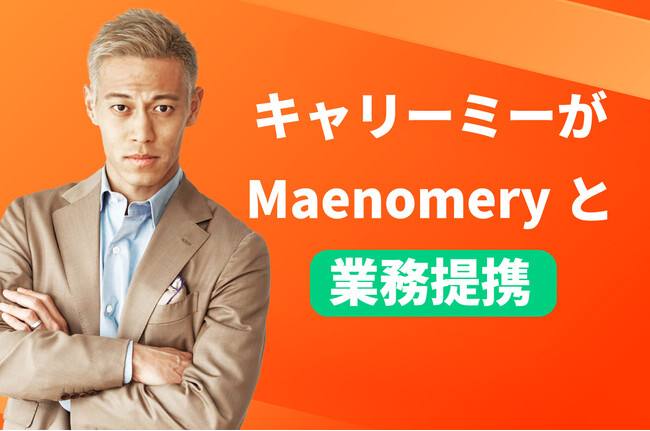 ■ Background
Many professional athletes retire in their 20s and 30s, and then seek a second career. In January 2013, Mr. Hoshino, the president and CEO of Maenomeli, also decided to retire from professional football and started his second life as a member of society. Mr. Hoshino, who says, “I only played soccer,” jumped into the world of sales without really knowing what to do, and is now a successful business owner, but there are very few cases like this.
[Image 2 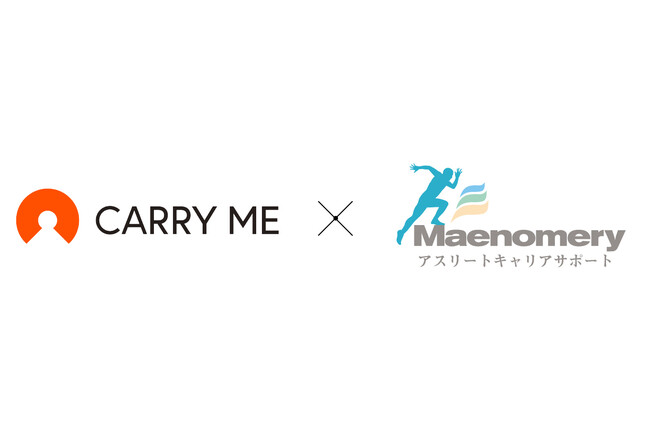 For top athletes who are active in the world, it is standard to have skills to live in society outside of competition. Keisuke Honda, a carry me ambassador, is also active as a professional soccer player and is engaged in various business development, but it is also true that the environment for a second career for professional athletes is not yet in place in Japan.
■ Solution (contents of business alliance)
Based on the concept of “professional contracts in the business world”, Carry Me hires excellent professional human resources that are directly linked to sales such as marketing, public relations PR, and corporate sales. This is a service to introduce to companies. With funding from Mr. Keisuke Honda and others, Carry Me will create a world where companies can not only compensate for the decrease in the labor force, but also contribute to business growth. For individuals, we will provide a society where each individual can take risks with their own abilities and efforts and open up the future by increasing career options.
In this business alliance, Maenomeli will introduce athletes and Carry Me will introduce professional human resources to companies that have problems in performing tasks that require specialized knowledge. In addition to utilizing professional human resources to grow their business, companies can work on solving their recruitment issues by in-house manufacturing of highly specialized fields and recruiting athletes with potential.
Beyond that, we believe that it will not only solve Japan’s rapidly declining working population, but also solve the second career problem that athletes face.
[Image 3 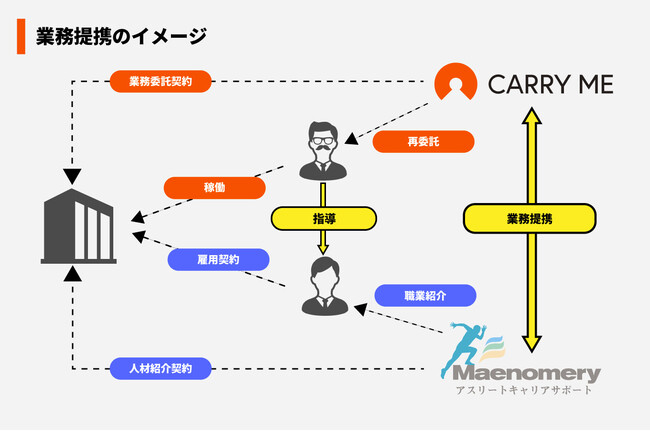 ■ Comment from Ryo Osawa, Representative Director of Piece to Peace Co., Ltd. Carry Me has been promoting professional contract services with the desire to create a society where individual talents and efforts can carve out their own lives, rather than academic background and age. In Japanese society, which is based on seniority and educational background, there are many talented business people who are unable to play an active role simply because they are “young” or “due to lack of education.” Carry Me aims to create a society where people are justly evaluated for their abilities, just like professional athletes. Through this partnership with Maenomeli, we believe that we can create the following three values.
・ Bringing closer to a world where Carry Me’s idea is that
“individuals can open up the future with talent and effort”
・This will lead to support for the “athlete’s second career,” which is in line with Maenomeri’s vision.
・Furthermore, it will be a solution to Japan’s declining working population. I would like to express my gratitude to Mr. Hoshino, President and CEO of Maenomeli, and everyone involved for giving me this opportunity. ■ Comment from Takashi Hoshino, President of Maenomery Co., Ltd. I have met many professional athletes and students of the Athletic Association. Athletes like me who have not been exposed to the sun, and athletes with brilliant careers, many of them are worried about their current jobs and their second careers after retirement. In order to solve such issues, I think it will be important to find ways to produce athletes with business skills and experience.
By collaborating with Piece to Peace Co., Ltd.’s “Carry Me”, which has a concept similar to professional contracts for athletes, we would like to contribute to solving the above problems and expanding the business of companies. thinking about. I would like to express my gratitude to Mr. Ryo Osawa and all the people who have been involved in giving me this precious opportunity.
■Company profile
About Piece to Peace Co., Ltd.
Established in 2009 with the philosophy of “Piece (small power of individuals) to create Peace (great power)”. Representative Director Osawa said that the values ​​of an excellent individual depended on the previous values ​​of “regular employee” and “lifetime employment”, and “how to work” and “determine work content, time, place, etc. by yourself”. “While the values ​​are changing to seek self-reliant careers, the values ​​of companies are sticking to hiring full-time employees despite the fact that they are facing a sharp decline in the working population, and professional human resources are not being utilized. Realizing the truth, he officially launched Carry Me in 2016.
Trade name: Piece to Peace Co., Ltd.
Established: September 2009
Capital: 471.5 million yen (including capital reserve)
* In 2019, we raised a total of 130 million yen or more from Persol Group and Mr. Keisuke Honda of HONDA ESTILO Co., Ltd. In 2022, we will raise a total of 350 million yen as Series B round.
Location: 8F Nagatacho Glass Gate, 2-16-9 Hirakawacho, Chiyoda-ku, Tokyo 102-0093
Representative Director: Ryo Osawa
Company HP: https://piecetopeace.co.jp/
Business description: Support business for professional contracts in the business world “Carry Me”
https://carryme.jp/lp002/0826_serch_marketing/
About Maenomery Co., Ltd.
Established in 2018 with the mission of “giving everyone a chance to move forward”. After retiring from professional soccer, Hoshino, the president and representative director, was worried about his own career. The main business is centered on athlete second career support, athletic club student recruitment support, and dual career support. We provide recruitment programs ranging from recruitment strategy planning for athletes of each company to training for prospective employees to training programs for young people. Representative Director and President, Takashi Hoshino Career Urawa Reds Youth → After studying at Ryutsu Keizai University, worked as a professional soccer player at multiple clubs in Japan and overseas.
Company name: Maenomery Co., Ltd.
Year of establishment: August 2018
Capital: 5 million yen
Location: South Wing Higashi Gotanda Building 4F, 2-9-5 Shinagawa Higashi Gotanda, Tokyo
Representative: Takashi Hoshino
Company HP: https://maenomery.jp/