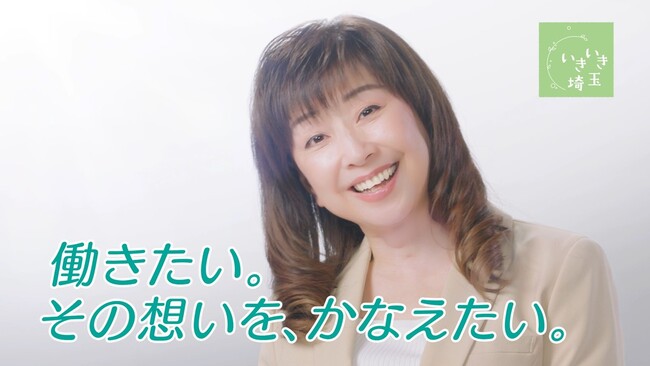 ◆ Active utilization of senior human resources
Saitama Prefecture is currently experiencing a declining birthrate and an aging population. In 2015, the aging rate (the ratio of the population aged 65 and over to the total population) is expected to reach 35.8%, up 8.6 points from 27.2% in 2021.
One of the concerns about the progress of the declining birthrate and aging population is the decrease in the “labor force population.” In the future, there are concerns that the decrease in the labor force in the prefecture will lead to a decline in the vitality of the local community and economic growth.
Under these circumstances, what is currently attracting attention is the active utilization of senior human resources. Promoting the employment of senior citizens as valuable human resources is considered to be one of the clues to solving the labor shortage in Saitama Prefecture.
◆ About the role of the Silver Human Resources Center
The Silver Human Resource Centers established in various regions of Saitama Prefecture are organizations that support the active utilization of senior human resources. For those who wish to continue working in some form after retiring from active employment, even though it is difficult for them to adapt to general employment, we offer a program to help people who want to continue working in some way, while making the most of their experience and abilities unique to seniors. It was established with the aim of securing opportunities for In principle, those who are 60 years old or older, have the desire to work in good health, and agree with the purpose of the Silver Human Resource Center are invited to join, and at 59 centers in Saitama Prefecture, public organizations, companies, individuals, etc., provide jobs where seniors can play an active role. Offered to all members. The content of the work is diverse, such as childcare/nursing care assistance, housekeeping assistance, general office work, building management, customer service/stocking, and flower care. Based on the experience, knowledge and skills of each senior, we will try to match jobs.
The Saitama Association of Silver Human Resources Centers is an organization whose members are the Silver Human Resources Centers established in each municipality in Saitama Prefecture. .
◆ Promotion overview
[Image 2 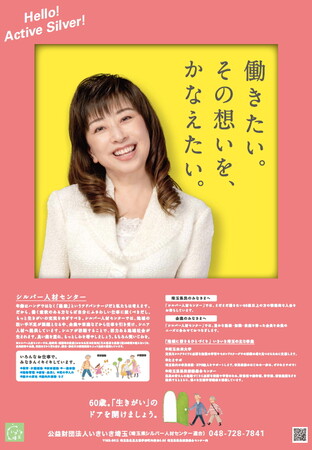 Iki-Iki Saitama Public Interest Incorporated Foundation is promoting projects aimed at realizing a lifelong active society in anticipation of an era of 100-year lifespans, such as providing diverse employment opportunities for motivated seniors.
As part of this project, a promotional activity “Hello! Active Silver! I want to work. I want to make that wish come true.” ) to expand. Based on the idea that age is not a handicap but an advantage of “experience”, this promotion aims to create a vibrant local community through the active participation of seniors. It was realized from the desire to actively use it. At the same time, we are also aiming to popularize the nickname “Silbonne” for female members of the Silver Human Resources Center.
During the period, through TV commercials (Television Saitama), radio commercials (Natural Broadcasting), newspaper advertisements, web advertisements, etc., we will target seniors in Saitama Prefecture and companies, etc., “I want to work. I want to fulfill that desire.” We are planning to send out a message.
Furthermore, in this promotion, talent Kumiko Oba is appointed. Mr. Ohba himself is from Saitama Prefecture and enjoys his work in a lively manner even after the age of 60. We would like to support seniors who want to work regardless of age. . Mr. Oba is scheduled to appear in commercials, advertisements, events, etc. that will be developed in this promotional activity as the “face” of the Saitama Prefecture Silver Human Resources Center Union.
◆ Implementation details
(1) TV and radio commercials
On TV (TV Saitama) and radio (Nippon Cultural Broadcasting), a commercial featuring Kumiko Oba will be aired. We will develop two versions, “For Saitama citizens” and “For companies”. In the “Saitama Citizen Edition”, Kumiko Oba sent a message from the same point of view as a senior living in Saitama Prefecture, saying, “I’m still energetic! I still want to work! Let’s enjoy an active senior life.” In the “Corporate Edition”, he explains the role of the Silver Human Resources Center, saying, “We connect members aged 60 and over who have a wealth of experience and knowledge according to the needs of companies.”
[Image 3 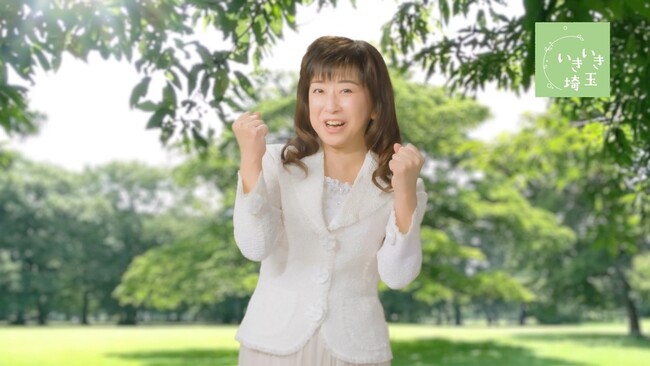 (2) Posters, leaflets and advertisements
Produced posters and leaflets with the promotional theme of “I want to work. I want to make that wish come true.” In addition, we will call on Saitama Prefecture’s citizens, Saitama Prefecture companies, etc., who are our appeal targets, to utilize the Silver Human Resources Center in Saitama Prefecture through newspaper advertisements and web advertisements.
(3) Events
On October 23, 2022 (Sunday), a tie-up event with the Sai no Kuni Iki-Iki Festival will be held at the Saitama Prefectural Citizens Activity Center. We are planning a health seminar (10:30-scheduled) where you can learn practical points for diet and training to enjoy your life in the future, and a talk show with Kumiko Oba as a guest (13:45-scheduled). increase.
*Please refer to the official website for event information. ⇒ Saitama Prefecture Silver Human Resource Center Union Official HP URL https://www.iki-iki-saitama.jp/silver/
◆ About the Silver Human Resources Center
The Silver Human Resources Center contributes to the creation of a vibrant aging society and regional society through the elderly working in the community, and aims to help the elderly live healthy and meaningful lives. It is a public interest and public organization established on a municipal basis based on the Act on Etc. At the Silver Human Resource Center, temporary/short-term employment (usually within 10 days per month) or light work (not exceeding 20 hours per week) is accepted from companies, households, public organizations, etc., and contracted, delegated, or dispatched. provided to members by ◆ About Ikiiki Saitama Public Interest Incorporated Foundation Iki-Iki Saitama Public Interest Incorporated Foundation aims to realize a society of mutual assistance and a society of lifelong active participation, through activities such as NPO/volunteer activities, lifelong learning activities, support for the active participation of senior citizens, promotion of community
participation, and provision of employment opportunities.
◆ Image character profile
Kumiko Ohba
Actress/psychological counselor
[Image 4 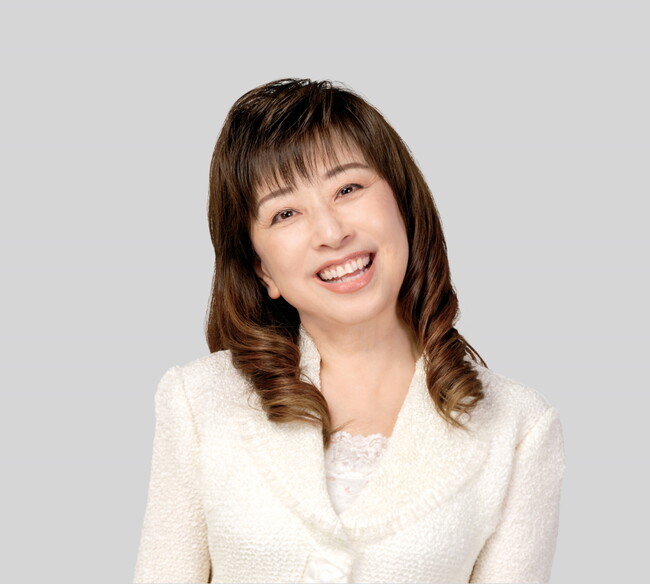 Born in 1960 in Saitama Prefecture. In 1973, he joined a theater company and appeared in television, commercials, and movies as a child actor. 1975 “Definitive Edition! In 1977, she made her debut as a singer with “Akogare”, released singles and albums one after another with the catchphrase of “100 million sisters”, and earned a gold record. Awarded twice. In 1978, he appeared in the drama “Comet-san” (TBS), which became his representative work, and gained tremendous popularity, including the top sales of bromide for two years in a row. She declared her graduation as an idol at the Nippon Budokan solo performance “Sayonara Concert” for the first time as a female idol. In a recent book, “Finally. at last! I think I’m going to get out of my panic disorder…” (Shufu to Seikatsusha). In addition, she currently provides counseling and lectures using her skills as a psychological counselor and various other qualifications.
⇒ “Hello! Active Silver! I want to work. I want to make that wish come true.” Special site URL https://www.iki-iki-saitama.jp/special2022/ Details about this release:
https://prtimes.jp/main/html/rd/p/000000001.000108009.html 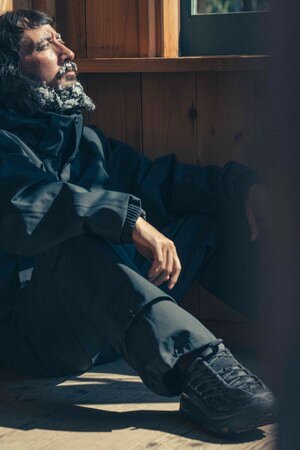