Lexbert Communications Co., Ltd.
We will establish a programming school “WiredIn Academy” in the Republic of Rwanda, Africa, and dispatch engineers to the world including Japan.
In Rwanda, an IT advanced country in Africa, we will establish a school using an efficient programming learning method (Techgym method), train IT engineers, and aim to expand to the world.
From November 2022, in Kigali, the capital of the Republic of Rwanda, located in central Africa, RexVert Communications Co., Ltd. and WiredIn, a local affiliate, will open a programming school “WiredIn Academy”. I will open the school.
Unlike the general form of school, it will be a company-owned school for the purpose of employment at WiredIn, a major software development company in Rwanda.
Many engineer human resources that we have trained are used as engineers of WiredIn at offshore development sites from around the world, including Japan, and in Japan, we dispatch African IT human resources to companies, etc. Our goal is to create a place of activity and ultimately contribute to the development of IT technology in Rwanda and the African region.

WiredIn Academy logo
RexVert Communications Co., Ltd. (Chiyoda-ku, Tokyo; Representative: Hidekazu Tanaka) and its affiliated company Wired Inn (Kigali City, Rwanda; Representative: Alan Kajange) located in the Republic of Rwanda have established a programming school called “Wired In Academy” will open in November 2022. It will be the first overseas franchisee of the self-study flat-rate programming school “Tech Gym” (main school: Chiyoda-ku, Tokyo).
https://academy.wiredin.rw/
This project will not only accelerate the development of IT human resources in Rwanda and increase the number of human resources for WiredIn, which develops software development services from Rwanda to Africa and the world, We have a plan to dispatch African IT human resources to Japan through our company. The ultimate goal is to support the IT industry in Rwanda, Africa, and Japan in the future by utilizing the skills and experience gained through overseas
operations.
-Background of this initiative-
[Image 2

Since the 2000s, African countries have made many efforts to develop excellent IT human resources, but due to various factors such as the economic scale of each country and the entry of foreign companies, there are fewer opportunities for young IT human resources to practice. As a result, there is a problem that it is difficult to develop excellent and experienced human resources. Based on this background, I thought that there was a need for a fee-based but inexpensive programming education and a programming school that used the place of employment as an exit, so I decided to open the school. 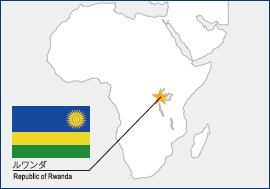 Rwanda position
It is a country located in inland Africa with a population of 13 million and a GDP of approximately 1.5 trillion yen. After the Rwanda genocide in 1994, it has achieved a miraculous recovery, and in recent years it is an emerging country that maintains an economic growth rate of 7-8%. Since the 2000s, based on the national strategy of building an IT-centric nation, the 20-year plan includes actively developing IT human resources, investing in T infrastructure, and attracting IT companies that are making advanced efforts. We have established a standing position as an ICT hub in Africa through In such an environment, Mr. Alan, the representative of Wired Inn, studied abroad and graduated from a university in the United States, and after getting a job in Europe, returned to his home country and started a business. Kigali, the capital of Rwanda, is one of the safest cities in Africa and is home to the only Carnegie Mellon University African Campus in Africa.
[Image 4

-About wired-in-
A company located in Kigali, the capital of the Republic of Rwanda, whose main business is contract development of software. It was founded in 2014 by Alan Kajange, the current president, and Hidekazu Tanaka, the representative of Rexbart Communications, and currently employs about 20 people, mainly Rwandan engineers. In addition to offshore development from Japan, we also undertake offshore
development from the United States and Europe.In Rwanda, we are mainly engaged in important system development projects such as government and bank systems, and in-house development services for Africa. companies that are developing into This initiative will operate a wired-in academy.
URL: https://www.wiredin.rw/
[Image 5

-About RexVert Communications Co., Ltd.-
Founded in 2009 by Hidekazu Tanaka, the representative of the company, as a contracted software development company, WiredIn was established through efforts in Rwanda. Currently, in addition to offshore software development, we also support Japanese companies aiming to enter the African market. In this initiative, as a franchisee of “Tech Gym”, we will translate teaching materials and provide operational support. In addition, it will be a destination in Japan for visa acquisition, Japanese language education, OJT training, and dispatch of engineers in Japan.
URL: https://www.rexvirt.com/
[Image 6

TechGYM logo
-About Tech Gym-
Monthly programming school without classes. Developed 30 schools nationwide. Python course, machine learning course, smartphone application development course, Rails course, and GAS course are available. The curriculum is designed to create “self-propelled engineers” through self-study. In the student internship program that started two years ago, 16 student engineers are already working. Tanaka, the representative of Rexbart, also participates in the Tokyo main school as a trainer, and this project was led to by recruiting student engineers who graduated from our school. Tech Gym alumni will also help set up and run Wired Academy in Rwanda.
URL: https://techgym.jp
Details about this release:
https://prtimes.jp/main/html/rd/p/000000001.000109669.html