For a limited time from October 3rd (Monday) to October 9th (Sunday) “Tensei Shitara Tsurugi Deshita” will appear outside the ticket gates of Shibuya Station on the Tokyo Metro Hanzomon Line.
The walls are lined with illustrations from volumes 1-14 of GC Novels’ Tensei Shitara Ken Deshita.
Fran and his master appear in the pillar winding. If you are in the area, please take a look.
[About advertising]
Posting period: October 3 (Monday) to October 9 (Sunday), 2022 Posted location: Tokyo Metro Hanzomon Line Shibuya Station Outside the ticket gate Shibuya Premium Set Advertisement on a pillar
*Please refrain from contacting station staff.
GC Novels “It was a sword when I was reincarnated” https://gcnovels.jp/sword/ [Image 2

Written by: Yuu Tanazuka/Illustration: Ruroo
An inorganic reincarnation fantasy novel that aims to become a legend with a girl with cat ears!
Before I knew it, I was reincarnated in another world. Not as a normal human, but as a sword――.
The main character, who was surprised but decided to live as a sword, While hunting monsters by making full use of the ability to float yourself, check the surrounding situation.
At that time, the moment it pierced the ground as a break, the ability stopped activating.
A girl with cat ears suddenly appears in front of the bewildered protagonist… [The latest 14 volumes are now on sale]
[Image 3 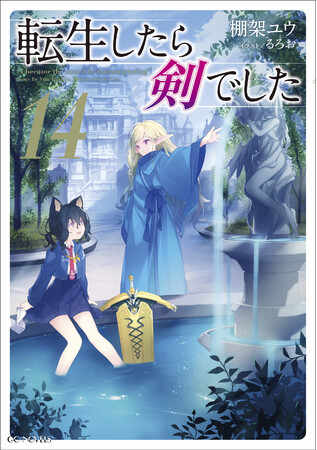 Reincarnated as a sword 14

ISBN: 9784867163405 / List price: 1,100 yen (main unit 1,000 yen + tax 10%) Master and Fran, who have finished their training and become stronger, He decides to go to the magical academy of the Kingdom of Velius, which was requested by Alistair.
There was also the expectation of the master that Fran could grow up with a child of the same age,
In addition to the unexpected reunion, conspiracies swirl around the academy… The journey of the two who sought strength rushes into a new chapter! A next-generation novel label that captures your dreams [GC Novels] https://gcnovels.jp
[Image 4

“GC Novels” includes “That Time I Got Reincarnated as a Slime” and “The Sage Who Claims to Be a Sage’s Disciple”.
A next-generation novel label that continues to take on endless challenges, publishing hot web novels one after another.
A new issue is released on the 30th of every month.
GC Novels Editorial Department Twitter
Tweets by gcnovels
Micromagazine Official YouTube
https://www.youtube.com/channel/UCZpW2IEf1n4e3RpbGJpAJzg
[Contact] release_mg@microgroup.co.jp