Silver Valley Farm, one of Canada’s largest blueberry producers (British Columbia/President Ray Billin), is actively developing brain food recipes recommended for brain and mental care that make the most of the high nutritional value of blueberries. In collaboration with the world-famous card game “Magic: The Gathering” (hereinafter referred to as “Magic”), we have created a brain food recipe developed by Mr. Ryan Gauche, a popular chef from Vancouver, Canada. announce. The recipe will be posted on our information site for Japan, “Blueberry Life Lab (https://silvervalleyfarms.jp/)”.
Strategy trading card game “Magic: The Gathering” that is enthusiastic about 40 million people all over the world
The world’s first trading card game, released in the United States in 1993. Created by mathematician Richard Garfield, it is currently translated into 8 languages ​​and attracts more than 40 million fans and players in more than 70 countries and regions around the world. In Magic, you summon mighty creatures, cast powerful spells, and aim to meet victory conditions such as reducing your opponent’s life to 0. The gaming landscape is constantly changing with new card sets released throughout the year.
Japan official website: http://mtg-jp.com/
Japan official Twitter account: https://twitter.com/mtgjp
■Ryan Gochechef
[Image 1 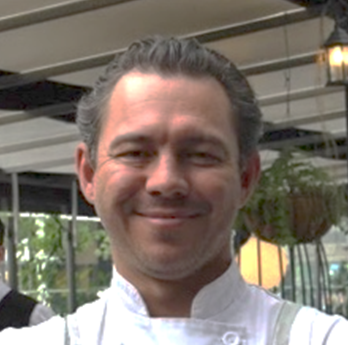 One of Vancouver’s hottest chefs. Using fresh ingredients such as seafood caught on the west coast of North America, seasonal vegetables and fruits, we are developing international creative cuisine that combines cooking methods from various countries based on Western cuisine. We are also focusing on disseminating the charm of
blueberries, developing and disseminating recipes that make use of them in various ways, from cooking to drinks.
“Blueberry Magic: The Gathering Recipe”
[Image 2 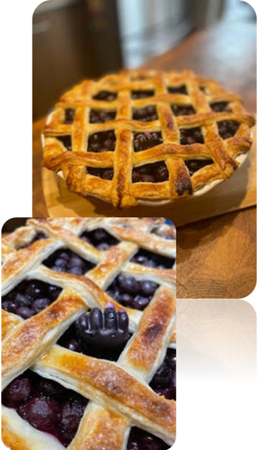 “Brain food” that makes the most of the high nutritional value of blueberries is developed in pies and focaccia. The concept is that you can eat casually before and after playing magic, which is highly strategic in the game.
[Blueberry pie]
Inspired by the magic card “pie wrap”,
Brain food that can be enjoyed when gathering with friends in the game. -material-
crust:
1 cup unsalted butter cut into small cubes
2 1/4 cups all purpose flour
Kosher salt (table salt) 1 teaspoon
8-10 tablespoons cold water
-How to make-
1. Put butter, flour and salt in a mixer and mix until it looks like coarse pea-sized sand.
2. Add cold water, 1 tablespoon at a time, until the dough forms a large clump away from the walls of the bowl.
3. On a clean surface, use your hands to form the dough into a large ball and divide it into two balls. Wrap each ball in saran wrap and refrigerate for at least 2 hours to 4 days.
4. On a lightly floured surface, roll out the dough to at least 7.5 cm larger than the size of your pie tin and let it rest in a container. Roll out the other dough to about 30 cm, cut into 2.5 cm wide strips to create a grid pattern, and set aside to cover the filling. filling for blueberry pie
-material-
6 cups blueberries
Zest of 2 lemons and juice of 1 lemon
1/2 cup cane sugar
1/4 cup all-purpose flour
1 teaspoon espelette pepper (or cayenne or red pepper)
1 egg
-How to make-
1. Put all the ingredients in a bowl and mix, then put the filling in the pie sheet mold.
2. Make another strip of puff pastry and make a grid across the top and bottom. Once everything is done, place the grate strips over the rim of the pie and secure.
3. Whisk the egg with a little water and brush the beaten egg only on the top surface of the pie. Place the pie in the center of an oven preheated to 190°C and bake for 50-60 minutes until golden brown. 【Bruschetta】
[Image 3 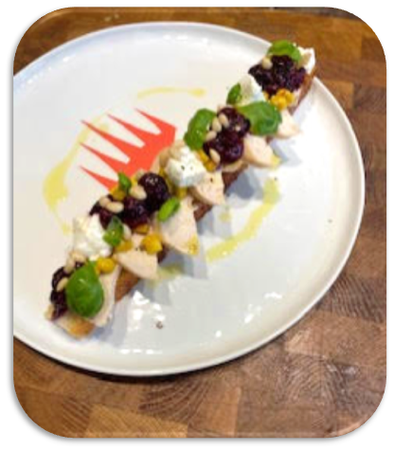 The perfect brain food for a snack between games, combined with a plate with the iconic “Planeswalker Symbol” of Magic.
-material-
12 toasted focaccia slices 2.5cm x 10cm
425g cooked smoked chicken
1/2 cup roasted corn
1/2 cup roasted blueberries
55 g goat cheese
3 tablespoons roasted pine nuts
12 basil leaves
-How to make-
1. Cut the focaccia into 2.5cm strips and cut into 10-15cm rectangles. Bake the smoked chicken on high heat. When fully cooked and allowed to cool, dice the chicken and set aside.
3. Add grapeseed oil and a pinch of salt to the corn,
Bake until golden brown.
4. Roast the blueberries in grapeseed oil until tender.
5. Toast the pine nuts at 200°C, add a little grapeseed oil, a pinch of salt and sugar and bake until golden brown.
6. Toast the focaccia until the surface is crisp.
7. Top the toasted focaccia with a spoon of softened goat cheese for a bruschetta topping. Then layer chicken, corn and blueberries on goat cheese. Garnish with basil leaves and pine nuts.
focaccia for bruschetta
[Image 4 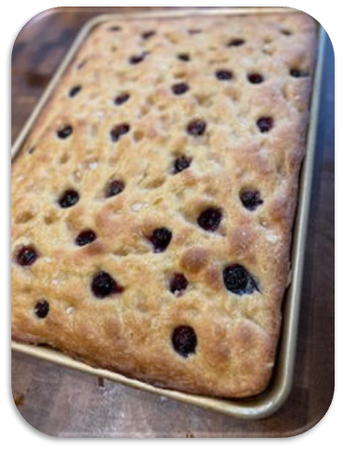 Blueberries are a very popular fruit in Europe and the United States due to their high nutritional value, health benefits, and the convenience of being easily eaten. At Silver Valley Farm, we use the latest freezing technology to deliver freshly harvested frozen blueberries that contain all the flavor and nutrients to Japan. Currently, the demand for frozen foods is growing as more people cook at home. Last year, Silver Valley Farm launched a project called “Blueberry Life Lab” to bring high nutritional value blueberries closer to people, hoping that frozen blueberries would be more familiar to them. This site is the official content for Japan of Silver Valley Farm, and is positioned as a place to disseminate the activities of “Blueberry Life Lab”.
The site has recipes that propose new ways to use frozen blueberries, such as recipes recommended for lunch while working from home and recipes recommended for drinking at home, in line with the new Japanese lifestyle where cooking at home has increased. Contents such as introduction of SNS posts actually made and introduction of blueberry nutrition are posted.
In the future, we plan to develop collaborations with various companies and organizations in Japan through “Blueberry Life Lab”, and we plan to enhance the content.
About Silver Valley Farm, one of the largest blueberry producers Silver Valley Farms, located in British Columbia, Canada, is one of the largest blueberry producers in North America. It originated in a farm founded in 1981 by the Bilin family. The farm, which was 21 acres (approximately 8 hectares) at the time of its founding, has grown to 525 acres (approximately 212 hectares) today.
Since 2004, we have been involved in packaging processing of blueberries, and since 2010, we have started shipping frozen blueberries in Canada under the “SNOWCREST” brand. It is sold in the frozen section of famous supermarkets. We are committed to “enjoying agriculture”, and we are doing everything from blueberry crop production to frozen processing, packaging, OEM and own brand development. In particular, we focus on quality at the cultivation stage on the farm, and we are constantly researching and developing blueberry tree care, cultivation methods, and harvesting methods. We are researching cultivation methods that are friendly to the local environment, and we are trying to make blueberry production a sustainable business. We aim to popularize blueberries while contributing to consumers and local communities.
[Table 2: https://prtimes.jp/data/corp/58026/table/13_1_accccf464fafe50fb5142021f82a38ed.jpg ]
[Image 6 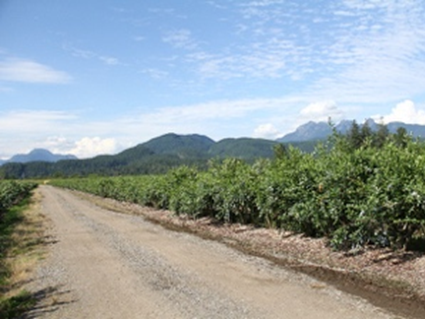 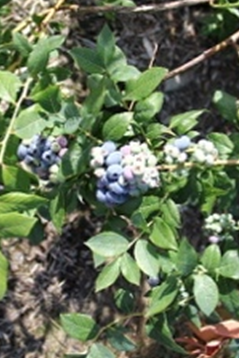