Tier
[Animal-specialized SNS: App release] A new SNS app “Tier”
specializing in animals for all animal lovers will be released on October 1st!
Finally, an SNS with a new perspective aiming for a life where people and animals can support each other, sent to everyone who wants to be healed by animals! ! 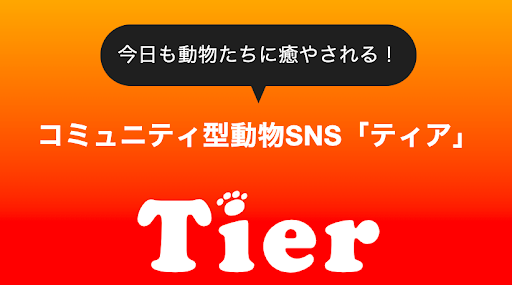 About the new SNS “Tier”
You can solve various problems related to animals with one app! Aiming for such an SNS, “Tier” was created by a group of animal lovers. The etymology is German “Tierheim”.
In Germany, an advanced pet country, there is an animal federation with over 800,000 members.
It operates more than 500 Tierheims in Germany and coordinates more than 750 animal protection associations.
Tierheim, which is operated for the purpose of protecting animals, is an animal shelter that provides treatment and training (discipline) for adopted animals as necessary and passes them on to new families. It is amazing that the transfer rate exceeds 90%. It speaks to the depth of German understanding of protected animals.
I want to create such an animal-friendly environment in Japan, and I want people who have the idea of ​​”throwing them away because they can’t keep them anymore.”
I want it to be zero! “Tier” was created with the idea of
We aim to be an SNS application that collects all information about animals. From this feeling, we launched such a service to revolutionize animal culture in Japan.
What Tier can do
At the time of launch on October 1st, you will be able to use “Posting short videos, LIVE distribution function, viewing, commenting, liking, registering as favorites, sharing, and searching”. In addition, a Tier column has been implemented. *Additional systems will be added at any time
If you have a favorite animal, you can send a tier chip, search for foster parents, information on stray dogs (cats), search for information on animal hospitals, item shops, etc. It will be an SNS packed with all kinds of information about animals.
▼ Featured system in the future!
Tier Chip: A system where users can purchase Tier Chips and give Tier Chips to accounts that they think are “cute” and “want to support”. *Purchase costs.
Accounts given Tier chips and users who purchased Tier chips will be able to use Tier chips to exchange pet goods and pet food at the item shop within their Tier.
▼A system that can be used at the moment (as of October 1, 2022) You can post short videos, LIVE distribution, view, comment, like, register as favorite, share, search, and view columns.
[Image 3 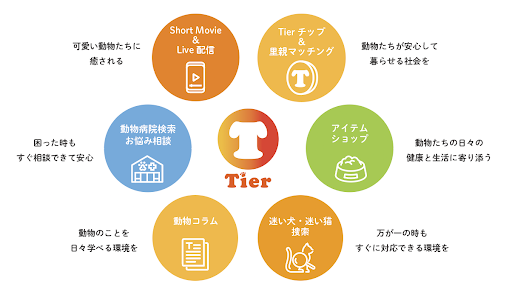 Tier app download
App Store (iphone users) Google Store (Android users)
About Tier Co., Ltd.
From everyday conversations with employees, it was triggered by the fact that employees love animals. Tier was born.
I love animals, but I can’t keep them in my current environment. I want information on how to live comfortably with animals! It’s quite difficult to keep animals, but I was healed by looking at them every day. I would like people to enjoy it.
HP: https://tier-family.co.jp/