TV Asahi Co., Ltd.
“Pure white newspaper advertisement” appears, let’s draw the sky freely and get excited!! “Newspaper drawing the sky together” posted in the morning edition of the Asahi Shimbun on 10/29 Movie “Weathering with You” voice actors Kotaro Daigo & Mori Nanana and other
celebrities participate in the war!
Commemorating the terrestrial broadcast of the movie “Weathering with You” at 9:00 on November 6th

On TV Asahi, October 29th (Sat) to commemorate the terrestrial broadcasting of the main uncut version of Shinkai’s blockbuster anime movie “Weathering with You” at 9:00 on Sunday, November 6th. The morning edition of the Asahi Shimbun will post a newspaper
advertisement for “A newspaper that draws the sky together.” In this project, in the Asahi Shimbun morning edition (Tokyo version) on Saturday, October 29th, we will have the heroine Hina Amano and her line “Hey, from now on” so that you can freely draw a picture of the sky yourself. It will clear up.”, a blank newspaper advertisement stating only the broadcast information will be posted.
If you post a picture of your work on Twitter with the hashtag “#I’ll deliver the weather”, there is a possibility that some of your work will be introduced on TV Asahi. Illustrations can also be posted by downloading the format from the “Weather Child” TV Asahi official website.
In this project, Kotaro Daigo who played the main character Hodaka Morishima in the movie “Weathering with You”, Nana Mori who played the heroine Hina Amano, Harumichi Shibasaki who is popular as a watercolor artist YouTuber, etc. Celebrities and illustrators will participate. -Terrestrial Broadcast Movie “Weathering with You” TV Asahi Official Website Illustration Data Download URL-
https://www.tv-asahi.co.jp/tenkinoko/news/0002/
[Image 2 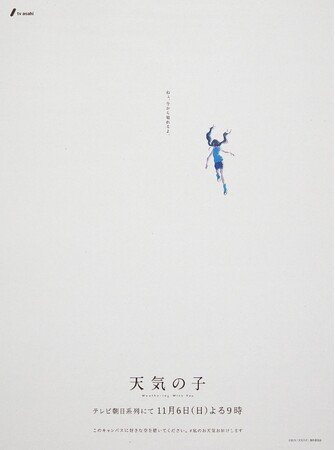 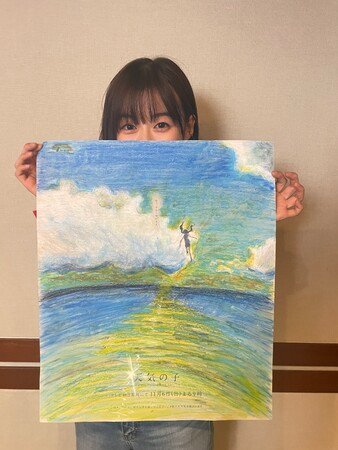 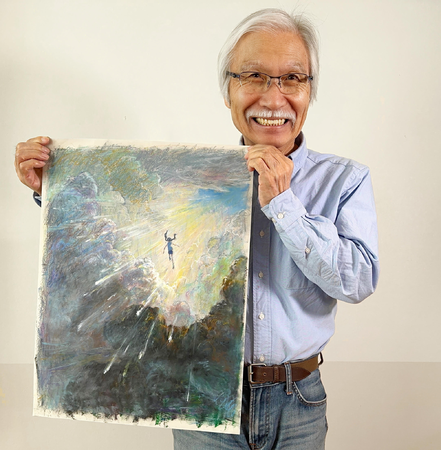 Works by Harumichi Shibasaki
Only Hina and her lines on the front page of the newspaper. Blank Newspaper Advertisement Appears!
The heroine Hina Amano and her line “Hey, it’s going to clear up from now on.” appeared on the front page of a newspaper with a blank newspaper advertisement showing only the broadcast information! If you freely draw a picture of the sky and post it on Twitter with a photo of the work and the hashtag “#I will deliver the weather”, there is a possibility that some of your work will be introduced on TV Asahi. Illustrations can also be posted by downloading the format from the “Weathering with You” TV Asahi official website. Kotaro Daigo and Nanana Mori, who voiced the movie “Weathering with You”, will also participate in this project. Please enjoy watching the terrestrial broadcast of the movie “Weathering with You” while enjoying each sky painting.
-Terrestrial Broadcast Movie “Weathering with You” TV Asahi Official Website Illustration Data Download URL-
https://www.tv-asahi.co.jp/tenkinoko/news/0002/
[Overview of newspaper advertisement]
Posting date: Saturday, October 29, 2022
■ Placement: Asahi Shimbun morning edition (Tokyo version)
[Image 5 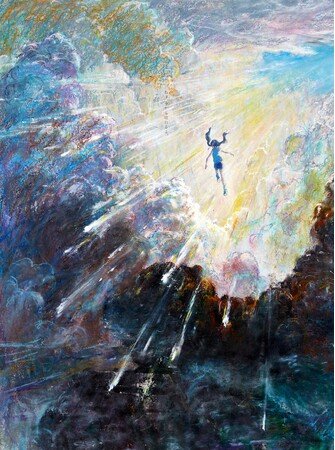 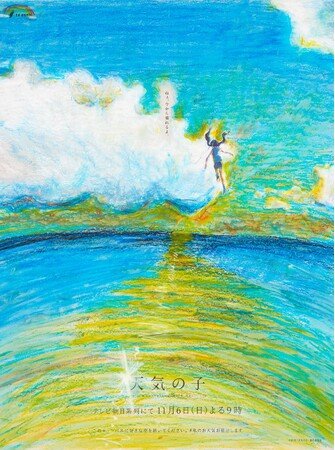 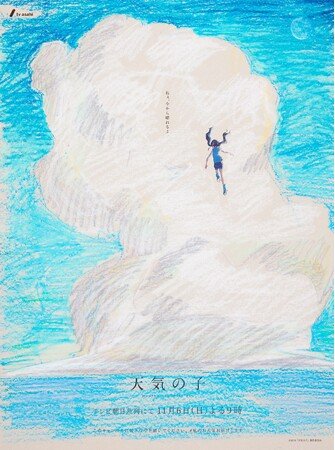 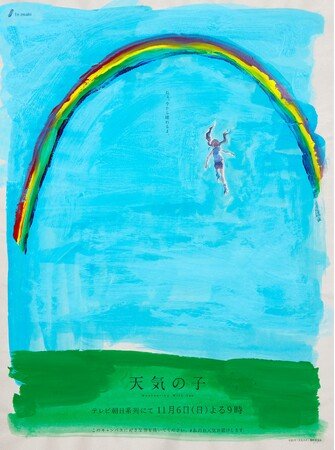 sample work
* Mr. Shibasaki and Mr. Mori were given the newspaper data in advance and had them draw it.
Harumichi Shibasaki (watercolor painting, YouTuber)
Born in Chiba Prefecture in 1947. 1970 Graduated from the Department of Art, Wako University. Became a painting instructor at Kodansha Famous Schools. In 2001, he went to the United States as an overseas researcher dispatched by the Agency for Cultural Affairs, conducted watercolor research at The Art Students League of New York, etc., and formed a friendship with Charlie Reed. In 2017, he opened a YouTube channel “Watercolor by Shibasaki” specializing in painting. Achieve 1.5 million subscribers as of October 2022.
Movie “Weathering with You” Uncut terrestrial broadcasting!
[Image 9 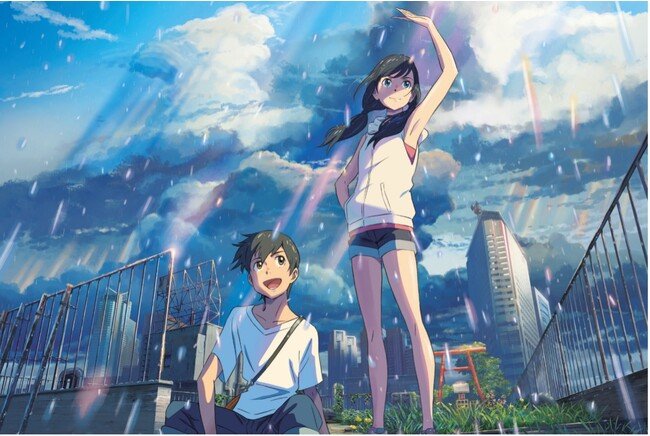 (C) 2019 “Weathering with You” Production Committee
In commemoration of the release of Makoto Shinkai’s latest work “Suzume no Toshimari”, Makoto Shinkai’s animated film “Weathering with You”, which was released in 2019 and recorded the highest box office revenue of the same year, will be released on Sunday, November 6, 2022. The main story will be broadcast uncut on TV Asahi from 9:00. https://www.tv-asahi.co.jp/tenkinoko/
Broadcast date: November 6, 2022 (Sunday) from 9:00 to 11:14 ■Broadcasting stations: 24 TV Asahi affiliated stations
About “Weathering with You”
■ Story
“I wanted to go inside that light.”
High 1 summer. Hodaka runs away from a remote island and comes to Tokyo. However, life soon became difficult, and the job I finally found at the end of my lonely days was
It was a dubious occult magazine writer business.
As if to suggest his future, the rain continues to fall every day. Meanwhile, Hodaka meets a girl in a corner of the crowded city. Hina, a girl who has a certain situation and lives brightly and strongly with her younger brother.
She had a strange ability.
■Overview
“Weathering with You” is a story about a boy and a girl who are tossed about by fate and “choose” their own way of life in an age when the climate is out of balance. Hodaka, a runaway boy who came to Tokyo, met Hina, a girl with a mysterious power. The story of their love is beautiful and painful, and is drawn as a message to all generations and the whole world as we enter a new era.
Kotaro Daigo will voice the main character, Hodaka, and Nanana Mori will voice the heroine, Hina. In addition, Tsubasa Honda, Chieko Baisho, Shun Oguri, and others are just a gorgeous cast. RADWIMPS is in charge of all the music in the play, including the theme song “Is There Still Anything That Love Can Do?” As a new challenge for this work, we have created several songs with vocalist Toko Miura, an artist who sings mysteriously the subtleties of the heart. The “poetry” that was spun together brought greater excitement to Shinkai World.