Workman Co., Ltd.
[Department store first opening!!] Appeared in Tokyu department store in Kichijoji popular with young people
A preview for the media will be held on Thursday, October 13, the day before the opening of the large-scale complex store of “#Workman Girls” and “WORKMAN Shoes”, which is attracting attention.

Workman (Headquarters: Isesaki City, Gunma Prefecture, President: Hideyuki Kohama ) will open a large-scale complex store of the popular “# Workman Girls” and the hot topic “WORKMAN Shoes” on the 5th floor of Tokyu Department Store Kichijoji on Friday, October 14th. As a workman, it will be the first store in a department store, which is a long-cherished desire. On October 13th (Thursday), the day before the opening of the store, a preview will be held at the same store for the media, influencers, and ambassadors.
Our store is a flagship store with the largest sales floor in Tokyo with the same area as the Ikebukuro Sunshine City Alpa complex store that opened in June. The cash register is shared and operated as one, but the Workman Women’s Wear and Shoes sections are separate. Our first-year sales target is a bullish 550 million yen, hoping that we will be able to attract new customers to department stores. We are aiming for the third place in the sales ranking of our company, following the Ikebukuro/Namba store.
Workman’s Spring/Summer sales were brisk due to the effects of the February 2008 “Declaration of Price Deferment” (until February next year). While other companies are rushing to raise prices, we will keep the prices of all PB products for autumn and winter unchanged. For this reason, the price competitiveness of the Tokyu Department Store Kichijoji store has never been higher, and the “strongest cost performance” products are lined up. In addition, Workman will extend the “price deferment declaration” until August 2011, and will maintain the prices of 96.3% of its main PB products in the spring and summer of next year.
The aim of opening a department store is 1. Raising the brand power for full-scale regional expansion of the “#Workman Joshi” store 2. Creating products that appeal to discerning department store customers 3. Others in the department store The three points are to create a beautiful sales floor that is comparable to a store. With our current ability, we can only open women’s stores in regional cities with a population of 150,000 or more, but we are aiming to lower the population to less than 100,000 by increasing our brand power by opening department stores.
In April of this year, the “#Workman Joshi” Namba CITY store expanded its floor space and opened the first “WORKMAN Shoes” store. We now know that shoes and clothing go well together and have a great synergistic effect. In addition, the number of male customers has increased significantly due to the attractiveness of Shoes. Until then, the store had average sales for a women’s store, but after annexing it, sales rose to second place among all our stores. The second “WORKMAN Shoes” store was also set up at the “#Workman Girls” Ikebukuro Sunshine City Alpa store. The opening sales of the Sunshine complex store increased by 145% from the first “#Workman Girls” store, Yokohama Sakuragicho Colette Mare store, which had been ranked first. The reason why the Ikebukuro and Namba stores are by far the No. 1 and No. 2 stores among all our stores is the combined store effect with the “WORKMAN Shoes” store.
With the success of both stores, we have decided to set up a “WORKMAN Shoes” store in all “#Workman Girls” stores nationwide in the future. By the end of March next year, there will be eight women’s and shoes complex stores nationwide. We plan to open more than 15 stores in the next fiscal year as well. The business format of women’s and shoes integrated stores is strong, and we are starting to see the
possibility of opening stores in areas with small populations. Although it is necessary to enhance the product line of women’s clothing and shoes (the product range will be broadened in areas with a smaller population in the trade area), the possibility of opening 400 stores in 10 years after the store opening format of the complex store is finally decided will increase. I’m here.
Currently, “#Workman Girls” are inundated with requests to open stores from large shopping centers (SCs) and department stores. From the point of view of the SC operator, it is the store that we want to attract the most. Furthermore, the popularity is increasing with the addition of “WORKMAN Shoes”. Since there is no competition for our high-performance, low-priced shoes, we have received many requests to open stores with only “WORKMAN Shoes”.
#Workman Girls x WORKMAN Shoes Tokyu Department Store Kichijoji Image [Image 1

#Workman Girls’ sales floor consists of a women’s wear corner, kids’ goods, and a men’s wear corner. WORKMAN Shoes offers a wide range of topical items that can be worn in a variety of situations, such as pumps, rain boots, outdoor boots, and room shoes for both women and men.
We will introduce some of the products developed by #Workman Girls x WORKMAN Shoes Tokyu Department Store Kichijoji.
[Image 2 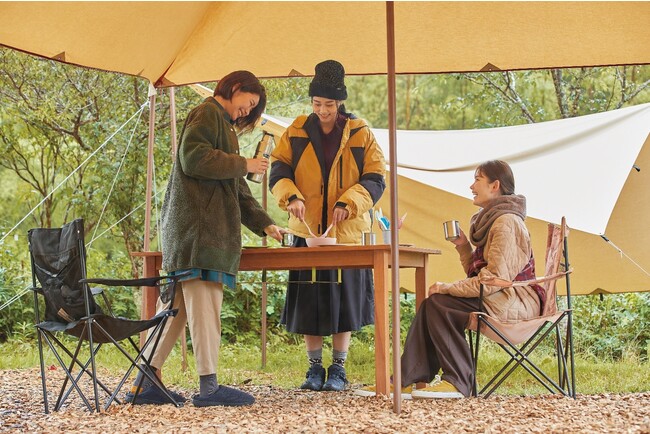