Yokohama Arts Foundation
[Yokohama Museum of Art] New Artist Picks: Wall Project Taishi Urakawa | A message from Taishi Urakawa, a millennial writer who reads through digital devices. A total of 5 new works (total length 52m) are lined up in a temporary enclosure during large-scale renovation work!
– Works of the Internet era drawn by millennials appear in the city – A series of 5 works with all new works with motifs related to Yokohama ● Messages that appear when you read the QR code scattered in the work with a smartphone
●The exhibition leaflet is available for free on the website. An interview with the author will also be released.
[Image 1

Since 2007, the Yokohama Museum of Art has held a small exhibition titled “New Artist Picks” in its art galleries and other exhibition spaces to introduce young artists who are expected to play an active role in the future.
While the museum is currently closed for large-scale renovation work, this special edition of the “Wall Project” will feature young artists’ creations twice in a temporary enclosure facing the “Bijutsu no Hiroba” (Grand Mall Park) in front of the Yokohama Museum of Art. to introduce. Following on from the “Haya Murakami | Stray Child” exhibition, this second installment introduces Taishi Urakawa (b. 1994), who portrays the sensibilities of the millennial generation. Urakawa is a millennial writer who grew up in the early 2000s and is often referred to as a digital native. His works reflect the new generation of information distribution brought about by the rapid spread of the Internet and social networking services (SNS). In this project, we will introduce a series of five works, all of which are new works.
[Image 2

Posted image A total of 5 new works with a total length of about 52m will color the temporary enclosure
Facing the temporary enclosure, from left to right, the scene unfolds: “Yokohama captured from above”, “Yokohama Museum of Art and Chinatown on the ground”, and finally “descending into the sea”. Motifs related to Yokohama are drawn fragmentarily in abstract paintings consisting of lines and colored surfaces, but the connection with Yokohama is not limited to that.
[Image 3 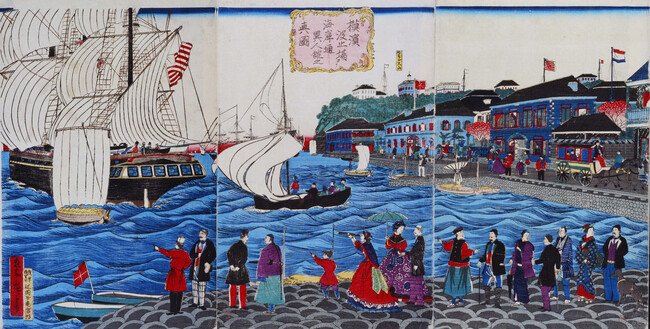 (Reference image) Utagawa Hiroshige (III) 《From Yokohama Wharf to Kaigandori Ijinkan》 1870s (Early Meiji period) Multicolor woodcut, triptych 35.8 x 72.5 cm (3 panels glued together) Collection of Yokohama Museum of Art (Ryu Saito) donated by Mr.
The unusual title of the exhibition, “Posting: Drawing of Yokohama Temporary Enclosure from Intelligent Hands,” was found by Urakawa while searching the Internet. Figure (1870s). This is a work depicting an American ship that had just set sail after loading up with trade goods in Kaigan-dori (present-day Yamashita Park), which was a foreign settlement at the time, and a person looking at it. The two people standing on the far left of the screen, probably pointing to an American ship across the sea, also appear in Urakawa’s work this time. However, what he points to is not an object outside himself, such as a ship, but the temporary enclosure itself in which he is drawn. The appearance of “they looking at the temporary enclosure” naturally overlaps with the gaze of “we looking at the actual temporary enclosure”. Their pointing is a device that makes us turn our attention to the act of “seeing.”
[Image 4

《Temporary Enclosure》 2022 Cotton cloth, gesso, acrylic on panel 75×322cm Photo: Shintaro Yamanaka
The title “intelligent hand desk” means “smartphone” in Chinese. This time, we will be exhibiting a sheet that is an enlarged print of the work, but Urakawa has added a total of 7 QR codes on the print. When we scan a QR code with our smartphone, we turn our attention to the act of “seeing.”
When we look at a work or the world through a smartphone camera, we are not simply looking at the subject. Needless to say, we point the camera because we want to see “something”, and today, we might be pointing the camera because we want to share “something” on SNS. Urakawa’s work evokes the “desire of the viewer” expressed by such a gaze. Here, the work is not something that is “outside of ourselves” like the foreign ship depicted in Hiroshige (III)’s work, but we ourselves enter the work in response to the call of the QR code. It works as a place. Through Urakawa’s work, the temporary enclosure that faces the show window of the shopping mall ceases to be a silent flat surface and becomes a medium where people’s eyes and desires come and go.
[Image 5 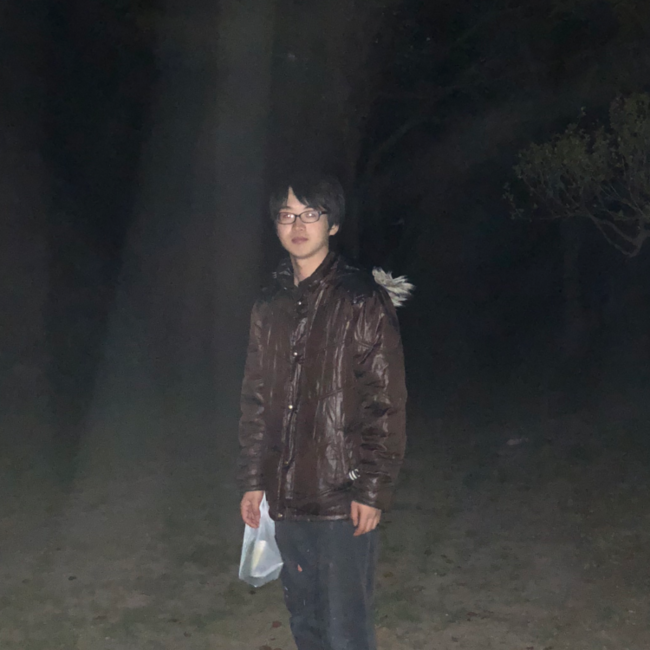