Gausium recently announced a new Phase Simultaneous Localization and Mapping (SLAM) solution on its website. According to Gausium, the system is a ceiling vision-based stereotactic system that provides long-term reliable mapping and positioning for service robots in changing indoor environments.
Limitations of conventional indoor positioning methods
Robust localization in navigation has always been a serious problem for indoor mobile service robots, as GPS does not work well in indoor environments due to satellite signal loss.
Conventional laser-based SLAM systems can operate reliably in simple environments that do not require high-precision localization. This method becomes very limited in complex and dynamic environments such as large shopping malls, supermarkets and factories. If the layout changes a lot overnight, or if the surroundings are empty and there are no reflective surfaces, the laser data alone cannot theoretically create a valid constraint between the current trajectory and the previous map, revisiting the same scene. Sometimes the robot gets lost or bumps into things.

Gausium’s Solution: Marker-Free Ceiling Vision Locating
Gausium devised a ceiling vision-based localization solution to provide a reliable localization solution in complex and dynamic indoor environments. In this solution, an upward-facing camera attached to the robot is used to extract ceiling features for mapping and localization. In an indoor environment, the ceiling surface is relatively simple and stable without dynamic interference such as movement of people or objects.
[Image 2 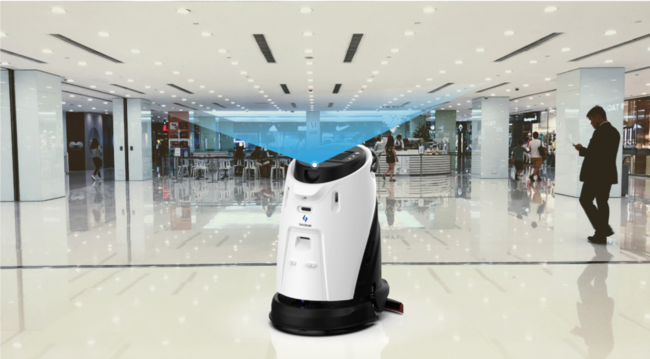 Marker-free stereotaxic
Gausium’s ceiling vision does not require artificial landmarks such as QR codes, so there is no need to install location markers on the ceiling like conventional ceiling vision, which greatly reduces labor and time. increase. A Gausium-developed feature extraction algorithm enables the robot to identify visual features such as ceiling pipes, lighting, squares, and curves, and use them as natural landmarks for orientation. It also overcomes the shortcomings of common vision-based SLAM algorithms, which are sensitive to lighting changes, and achieves accurate localization in various indoor environments throughout the day.
Map auto-update
Don’t worry about map imperfections on the first scan. The Gausium ceiling vision-based orientation system can automatically maintain a ceiling vision map while the robot is operating. As the robot travels, previously uncovered areas are automatically covered and added to the map. This advantage is attributed to the long-term localization and mapping mechanism of Gausium’s laser-based SLAM.
Integration with laser-based systems
Gausium has designed a scheme that integrates ceiling vision-based and laser-based stereotactic systems to increase the robot’s versatility and adaptability. The two systems can work independently or in conjunction. As long as the perception of the visual modality matches that of the laser modality when the robot works, constraints are established to achieve higher localization accuracy in complex and dynamic environments.