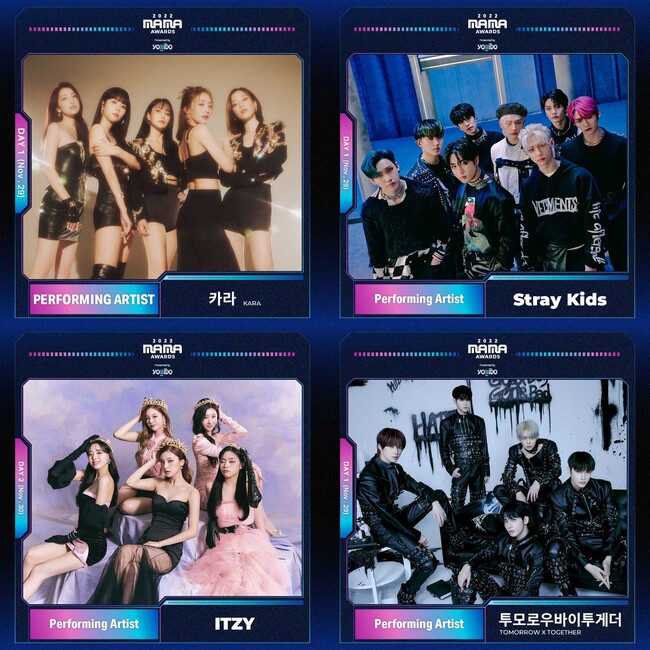 (C) CJ ENM Co., Ltd. All Rights Reserved
The world’s largest K-POP award ceremony “2022 MAMA AWARDS” will be held one week later, and an all-time stage that can only be seen at MAMA AWARDS has been announced.
CJ ENM announced today (23rd), “KARA, Stray Kids, ITZY, and TOMORROW X TOGETHER will perform a special stage at the ‘2022 MAMA AWARDS.'” We have announced a performance that allows you to get a glimpse of the stage of “2022 MAMA AWARDS”, which is a hot topic with various performances, in advance.
First of all, KARA’s hit song medley stage, which will return as a full group after 7 years, has been announced, raising the expectations of fans. KARA will perform a medley of their past hits “Lupin”, “Mr.” and “STEP” on the “2022 MAMA AWARDS” stage. “2022 MAMA AWARDS” has previously announced the news that KARA will appear as a complete group and will unveil the new song stage of the 15th anniversary album “MOVE AGAIN” for the first time.
Stray Kids is preparing a unique and original performance. Stray Kids, who have a clear team color and are steadily building up their careers by setting various records such as 2 consecutive 1st place on the ‘Billboard 200’, are predicting a more challenging stage than ever. . In this stage, “Kyocera Dome Osaka” will be transformed into a bizarre laboratory, and 8 maniacs will be born, and it is expected to show a powerful performance that can only be seen here.
Don’t miss the stage of ITZY, the representative performer of K-POP, who has performed at the end of the year award ceremony every year. ITZY will present the new song stage of the new mini album ‘CHESHIRE’, which is about to be released on the 30th, at ‘2022 MAMA AWARDS’. In particular, ITZY showed an all-time performance with actor Heo Sung Tae on the stage of MAMA last year. This year, with the concept of ‘Birth of the Queen’, we are preparing a more gorgeous and upgraded performance, raising expectations.
The stage of TOMORROW X TOGETHER transformed into Romeo was also announced. TOMORROW X TOGETHER, who has shown an unrivaled presence with trendy melodies and solid storytelling, will become a Romeo driven by anger and a sense of loss because his first love has not materialized, and will perform only at the “2022 MAMA AWARDS”. show off. At the 2021 MAMA, TOMORROW X TOGETHER, who showed a strong dance break and a variety of performances and raised the enthusiasm of the venue, are paying attention to what kind of performance they will show this year.
[Image 2 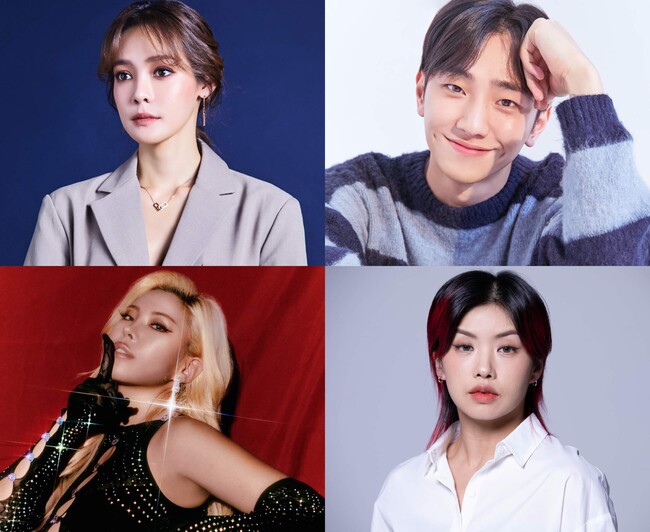 (C) CJ ENM Co., Ltd. All Rights Reserved
“2022 MAMA AWARDS” has also released a red carpet MC. Talent Ahn Hyun Mo, actor Nam Yoon Soo, and dancers Gabi and Aiki have been selected as MCs for the red carpet of “2022 MAMA AWARDS”. On November 29th, the first day of the award ceremony, Ahn Hyun-mo, Nam Yoon-soo, and Gabi made a sortie, and on November 30th, the second day, Ahn Hyun-mo, Nam Yoon-soo, and Aiki made a sortie as red carpet MCs. I plan to act as “2022 MAMA AWARDS” will be held at Kyocera Dome Osaka with Yogibo as the title sponsor for two days on the 29th and 30th. , Live
broadcasting and live distribution are planned on the video
distribution service Mnet Smart + and au Smart Pass Premium. MAMA AWARDS Official Twitter: https://twitter.com/MnetMAMA
MAMA AWARDS Official Instagram: https://www.instagram.com/mnet_mama Ticket sales site: http://w.pia.jp/t/2022mama/
[CS broadcast “Mnet” broadcast information / video distribution service “Mnet Smart+” distribution information]
“2022 MAMA AWARDS Red Carpet” live broadcast
Date: November 29th (Tue) 16:00- / November 30th (Wed) 16:00- “2022 MAMA AWARDS” live broadcast
Date: November 29th (Tue) 18:00- / November 30th (Wed) 18:00- Special site: https://mnetjp.com/mama/2022/
[Mnet channel information] https://mnetjp.com/
Korea 100% entertainment CS broadcasting station. We deliver not only the latest K-POP and Korean dramas, but also popular content in various genres such as variety shows and travel programs. SKY PerfecTV! , Can be viewed on cable TV and others nationwide
[Mnet Smart+] http://smart.mnetjp.com/
An online video distribution service where you can enjoy the latest Korean entertainment and various contents of K-POP idols in one. In addition to being able to watch Mnet Korea and Mnet Japan live TV in real time, the program archive is also extensive. You can watch online for as long as you want, whenever and wherever you want, on any internet device.
Details about this release:
https://prtimes.jp/main/html/rd/p/000001347.000003711.html 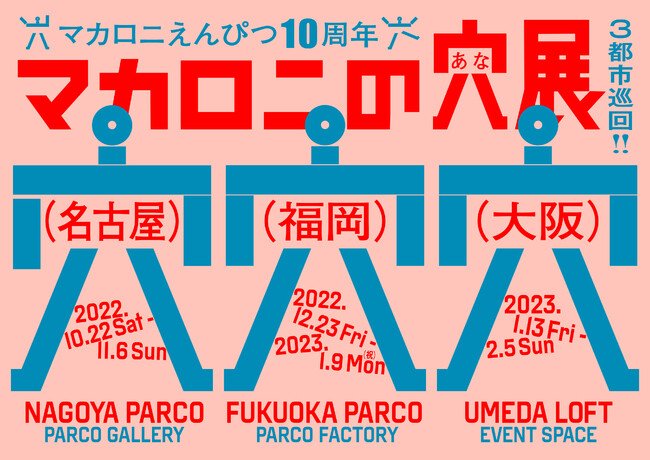