This time, we will announce the top 10 weekly views ranking of the main videos released on YouTube from November 14th to November 20th. The target is videos longer than 1 minute, excluding videos published on corporate official channels (excluding news).
“Skypeace”, which was conducting a collaboration week “Skydot” with “comdot”, released a medley of popular TikTok songs with comdot and won first place (3.3 million views) for the first time.
The 2nd place (3.14 million views) is the music video of the popular TikTok song “Kawaite Gomen” sung by the popular voice actress “Hayami Saori” who is in charge of the character voice of the anime. Both of the top two videos are popular songs on TikTok, and you can feel the momentum of TikTok.
Among Johnny’s, “Kis-My-Ft2” ranked 4th (2.22 million views), and “Jani no Channel” ranked 6th (2.04 million views).
“Hikakin” x “Until Homeless Become Millionaires. ] is also a must-see. (7th place: 2.04 million views)
The YouTube analysis tool “Digital Creators” operated by Analyzelog Co., Ltd. will announce the top 10 YouTube weekly video playback rankings independently researched. The target is the video uploaded from November 14th to November 20th. The rankings up to the 20th place are announced at Digital Creators below.
https://digitalcreators.jp/youtube_ranking_1w_221121/
* Articles published on this PRtimes are licensed only when the above ranking link is set without nofollow.
[Main video weekly playback number TOP 10]
[Image 1 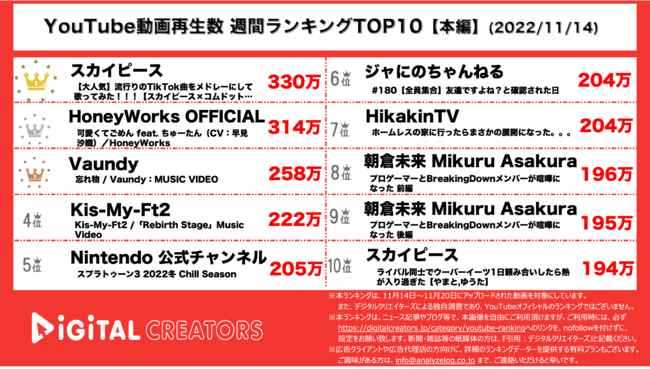 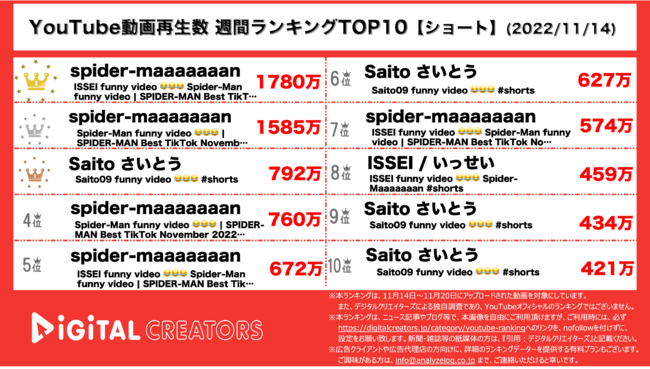 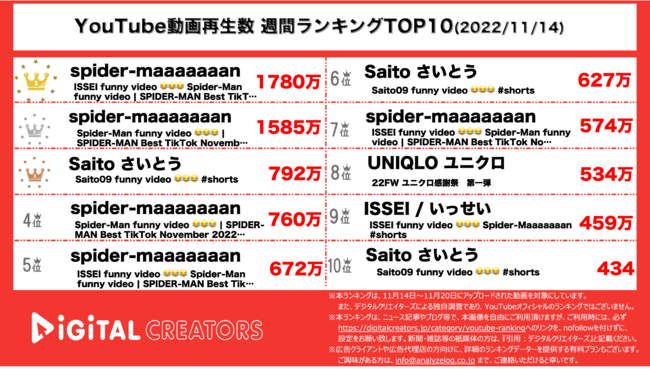 YouTube ranking
“spider-maaaaaaan”, which ranked first in the short video ranking, won first place in the ranking for all videos, and nine other short videos were ranked, making short videos quite dominant. there is
Aside from short videos, the only commercial for “UNIQLO” ranked in at 8th place.
[Digital Creators] Weekly ranking of popular videos on YouTube. [Image 4 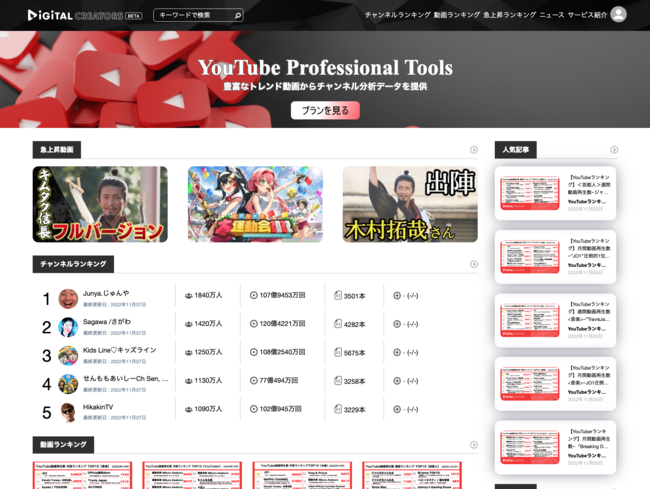 Digital Creators is a site where you can check the ranking data of YouTube’s popular channels and videos for free. We plan to release various data such as rankings by genre, as well as rankings by period such as weekly rankings, monthly rankings, and annual rankings. We also provide detailed data for a fee for advertising agencies and companies that want to use YouTube for promotion.
*A separate press release for DigitalCreators is planned.
[Operating company: Analyzelog Co., Ltd.]
Our company was established in May 2018 for the purpose of building a “creator-first” ecosystem for YouTubers and other creators, as well as digital strategy creation and operational support for Japanese content companies such as anime and manga. Currently, we are expanding our business from an influencer agent to a digital advertising agency. The founding team has various backgrounds in Google/YouTube, avex, Mizuho Bank, and popular YouTubers, and has strengths not only in YouTube know-how but also in tech, entertainment, and business. We aim to build a new ecosystem of online creators in a new form of agent, instead of the conventional office-type exclusive model. , Kotami no Channel, Ch Sen, Momo, Ai & Shii, Homo Sapi, and other popular YouTubers.
Company name: Analyze Log Co., Ltd.
Management team:
Representative Director and CEO Kensuke Miura
Founder COO Yutaka Hagiwara
Director: Masaomi Takagi
Outside Director: Benjamin Grubbs (CEO of Next10Ventures)
Outside Director: Ryusuke Ikeda (Management of the YouTube channel “Gacchanneru”)
Established: May 22, 2018
Head office: Seizan I 1002, 2-26-32 Minami-Aoyama, Minato-ku, Tokyo Capital: 439.93 million yen (including capital reserve)
Business description: Agent business for influencers such as YouTubers URL: https://analyzelog.jp
Digital Creators: https://digitalcreators.jp/category/youtube-ranking Adoption: https://www.wantedly.com/projects/598774
Details about this release:
https://prtimes.jp/main/html/rd/p/000000126.000042106.html 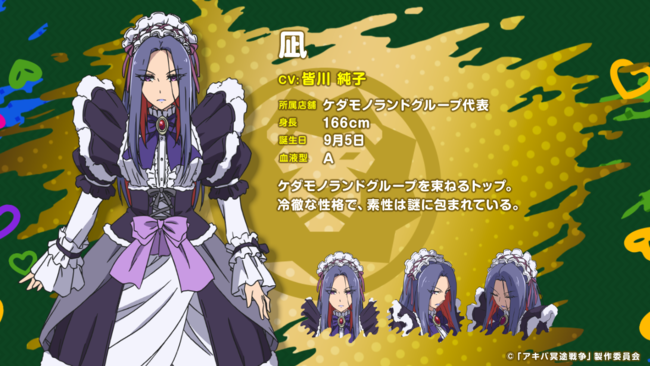