Todo Onada Co., Ltd.
Appeal to economy rather than luxury. Todo Onada Co., Ltd. Announces Analysis of Web News on “Black Friday” in 2022
Press releases and web news emphasize measures for “commodity prices, depreciation of the yen, and price increases” rather than “rewards.”
Todo Onada Co., Ltd. (President Yasuyuki Matsumoto) has announced an analysis of web news related to “Black Friday” based on data from “Qlipper” (https://qlipper.jp/), a tool that can monitor over 3,000 web media. did.
Over the last few years, more and more companies are running campaigns on Black Friday.
This year as well, each company will send out information for the 4th Friday of November, and the media will report it.
In this survey, we aggregated and analyzed corporate press releases and web news articles written by the media regarding Black Friday over the past month.
■Summary
・Black Friday period starting in November
・Thursday two weeks before more releases and Friday one week before ・ One week before the production when media exposure is concentrated and Amazon’s influence
・ Aeon, the leader of Black Friday, Family Mart, which is a hot topic for the first time
・ Words that support this year’s Black Friday, in line with consumer thriftiness Changes in the number of articles including “Black Friday”
[Number of all articles]
[Image 1

Transition of releases including “Black Friday” (October 21st to November 20th) ■ Black Friday period starting in November
First of all, looking at the number of articles including “Black Friday”, the number of articles that had hardly existed before suddenly increased on November 1st.
Looking at the graph of press releases including “Black Friday”, there were 0 releases on October 31st, but 8 on the 1st, indicating that companies are waiting for the start of November to disseminate information. You can see that
■Thursday two weeks before more releases and Friday one week before After that, press releases are concentrated on November 10th (Thursday). On this day, when 14 releases were released, major retailers such as Aeon, Akachan Honpo, and Toys “R” Us sent
information about Black Friday.
The nature of this was to announce in advance about the campaign to start on the 18th (Friday), one week before Black Friday. The reason why we announced the campaign, which starts next Friday, on Thursday was probably to secure time for the media to cover it before Saturday and Sunday.
The graph shows that on the 18th (Friday), one week before the actual Black Friday (25th), there are many companies that start campaigns as described above, and many companies announce campaigns that will start on the 25th.
■ Amazon’s influence and the week before the event when media exposure is concentrated
There were 44 press releases including “Black Friday” issued on the 18th. This is especially because Amazon Japan LLC has lifted the ban on campaign information, and companies that sell products on Amazon have also released products.
In addition, there were many articles other than press releases on the 18th, which were also affected by Amazon. Amazon held a press conference inviting actor Mirei Kiritani and YouTuber Orutana Channel, and the media all wrote articles.
[Transition of “Black Friday” and Amazon articles]
[Image 3 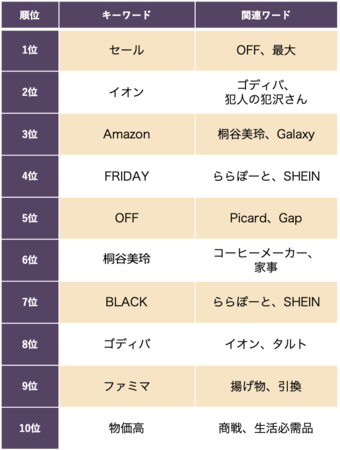 Aeon, the leader of Black Friday, Family Mart, which is a hot topic for the first time
The 2nd place “Aeon” has 9 press releases only by its own company, and actively disseminates information.
The method of media exposure is in contrast to Amazon, where articles were concentrated on Amazon on the 18th, while Aeon issued a release as soon as November began, and after that, released intermittently and received a certain amount of media exposure. I keep
[Changes in articles on Amazon and Aeon]
[Image 5

Changes in articles on Amazon and Aeon on “Black Friday”
FamilyMart, ranked 9th, has been the most talked about among the companies that have launched their Black Friday campaigns for the first time this year. The content of the campaign is that if you buy two fried foods, you can get a free exchange ticket that can be exchanged for “Famikara”, and many articles have been written mainly on the net news.
■ Words that support this year’s Black Friday, in line with consumers’ thriftiness
In addition to company/brand names and words related to sales, the only thing that entered the trend was “high prices.”
Articles containing “Prices” and “Black Friday” account for 8.44% of all articles containing “Black Friday” and 12.55% for hypothetical PV (described later).
Also, in the case of “yen depreciation”, which is a word close to “price”, it is 6.22% of the number of articles and 8.47% of the virtual PV.
Contrary to these economic words that make consumers want cheaper products, what about words that make them want to spend more money? For example, articles containing “luxury” and “Black Friday” are only 6.41% of articles containing “Black Friday” and 3.94% of virtual PVs. Also, in the case of a similar word “reward”, it is 5.77% of the number of articles and 7.44% of the virtual PV.
[Image 6 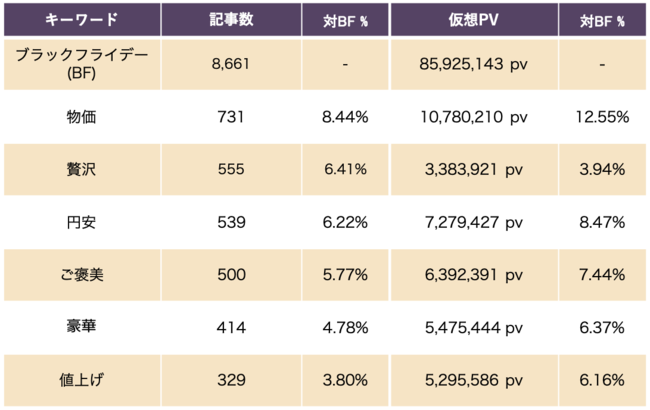 Numerical values ​​of words such as “price”
When the words in the above table are divided into light (luxury, reward, luxury) and dark (price, weak yen, price increase) groups, the number of dark word groups is higher.
[Image 7

Numerical values ​​of words grouped in light and dark
Press releases from businesses and articles written by the media about this year’s Black Friday show more deals in line with consumer frugality than an opportunity to treat yourself to something you wouldn’t normally buy. It can be said that the appeal that it is an opportunity to shop is dominant.
■Survey overview
Survey period: October 21 to November 20, 2022
(Qlipper article confirmation date and time)
Research agency: In-house research
Survey target: Web news articles that include the word “Black Friday”, and articles that include companies and words mentioned in the survey Survey method: Among the web news of major domestic news sites collected by Qlipper during the survey period, the number of surveyed articles, the number of virtual PVs, and the number of tweets of articles were counted.
* Virtual PV: Qlipper, which monitors over 3,000 domestic media sites, uses its own engine to predict and calculate the page views of articles based on the acquired site structure. (Patent No. 7098122) ■ About Qlipper
Qlipper (URL: https://qlipper.jp/) is a PR effect measurement service that supports public relations work.
We will reduce the cost of PR research by web monitoring, SNS monitoring, PR analysis, and business automation.
Get accurate, high-volume data in real time with ease.
It can be used for target setting through competitive comparison and benchmarking.
We offer a free trial and our consultants are dedicated to helping you with the initial setup and optimization of the service.
Customized data can be easily checked and used to analyze and improve PR activities.
[Todo Onada Co., Ltd.]
https://todo-o-nada.com/
President and Representative Director: Yasuyuki Matsumoto
Mita 43MT Building 2F, 3-13-16 Mita, Minato-ku, Tokyo 108-0073 Company establishment date: January 20, 2020
Capital: 5.8 million yen
[Inquiries regarding press releases]
Todo Onada Co., Ltd.
Qlipper management office
Person in charge: Endo
Email: qlipper@todo-o-nada.com
Details about this release:
https://prtimes.jp/main/html/rd/p/000000051.000054369.html