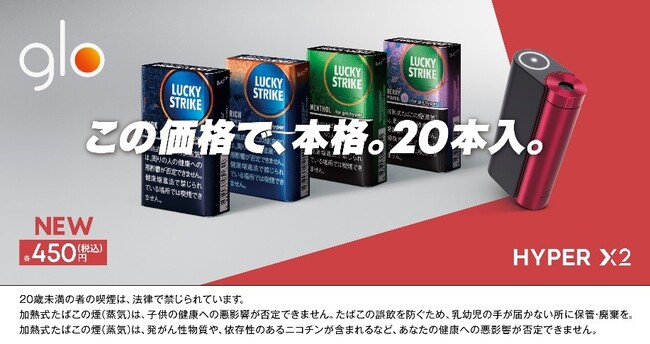 Since its birth in 1871, Lucky Strike, which features the traditional deep flavor of tobacco, has continued to evolve in response to changing consumer needs, and has been a favorite of many customers for over 150 years. I received it. The tobacco stick series dedicated to Lucky Strike’s first heated tobacco “glo (TM)” released in 2021 realizes the original flavor and depth of tobacco even with heated tobacco sticks, giving you a full-fledged taste. It is a product that can be enjoyed, and since its launch, users have commented, “I can enjoy the kick and response that lives up to the name of Lucky Strike,” and, “It was my first heated tobacco, but it was more flavorful than I expected, and Lucky Strike.” I was able to enjoy the taste and aroma of ”, and it has been very well received. (*2) This time, with the desire to provide more users with the authentic taste of the “Lucky Strike” series exclusively for glo (TM) at a price that is easy to pick up, 1 pack contains 20 bottles while maintaining the same taste. We will release all 4 brands of the lineup for 450 yen (tax included).
BAT Japan aims to meet the needs of cigarette users who are interested in heated tobacco but are unable to use it for reasons such as taste and texture, as well as consumers who are already enjoying heated tobacco. We are aiming to expand the variety of (TM) devices and dedicated tobacco sticks, including “LUCKY STRIKE”, “KENT”, “KOOL”, etc., for cigarette smokers. We offer a wide range of choices for consumers by developing familiar brands and offering more flavors such as capsules, menthol, and flavors. Going forward, we will continue to respond to the diverse needs of existing heat-not-burn tobacco users, while at the same time expanding our lineup of products (PRRPs) that have the potential to reduce health risks, and implementing the BAT Group’s corporate strategy “A Better Tomorrow (TM).” (better tomorrow)”.
*1 May not be available at some stores.
*2 Based on our research. Results of a consumer survey conducted on 300 people (survey period: November 1, 2021 to November 30, 2021). The comments are based on personal impressions only.
Product Summary
Lucky Strike series for glo(TM) hyper (heat-not-burn tobacco product) [Image 2 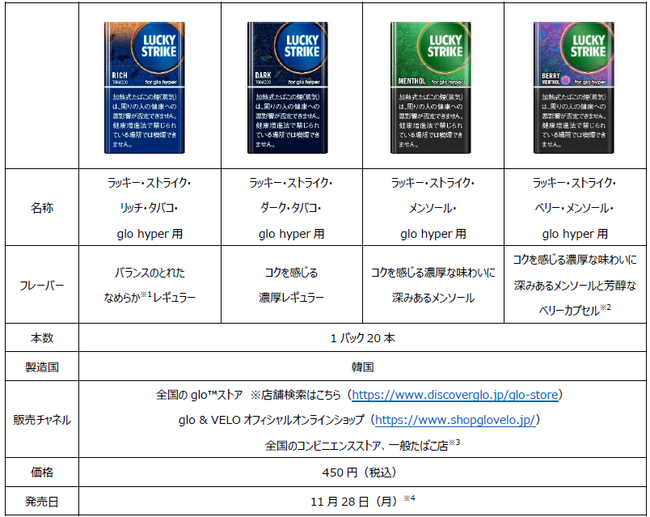 *The image is an image.
glo(TM) stores nationwide *Click here for store search
(https://www.discoverglo.jp/glo-store)
glo & VELO Official Online Shop (https://www.shopglovelo.jp/) *1 The expression “smooth” does not mean that the adverse effects of this product on health are less than those of other products. *2 This tobacco product does not contain berries or fruit juice. *3 May not be available at some stores. * 4 The current glo (TM) hyper “Lucky Strike” series (12 bottles) 4 brands will be discontinued after December 2022.
About BAT Group
The BAT Group (British American Tobacco Group), founded in 1902, is a leading multi-category consumer product company. Enabling A Better Tomorrow(TM) by increasing consumer enjoyment and reduced risk product choices and reducing the health impact of our operations Aiming to be About the latest information on heat-not-burn tobacco glo(TM) The latest information on products and campaigns can also be viewed on the official website and official Instagram account.
・ glo (TM) official website: https://www.discoverglo.jp/
・ glo (TM) Official Instagram Account (@glo_japan):
https://www.instagram.com/glo.japan/
BAT Japan Company Profile
Company name: British American Tobacco Japan LLC
Location: 9-7-1 Akasaka, Minato-ku, Tokyo 107-6220 Midtown Tower 19F (Reception) Representative: President James Yamanaka
Overview: BAT Japan is a member of the international BAT Group (headquartered in London), the largest tobacco group in terms of sales among listed tobacco companies. In Japan, in 1984, we started the tobacco sales business. In 2001, the company name was changed to BAT Japan, and we import about 100 brands of cigarettes, heat-not-burn tobacco, oral tobacco, etc. from overseas bases. Major brands in Japan include KENT, KOOL, LUCKY STRIKE, neo(TM), glo(TM), and VELO. URL: https://www.batj.com/
Requests regarding publication methods
The BAT Group has established voluntary international standards for the proper marketing of tobacco products. For this reason, we ask all concerned parties to refrain from communicating with people under the age of 20 and to display the “Smoking and Health Precautions” in all communications regarding tobacco products to consumers. Regarding heat-not-burn tobacco products, we would like you to consider displaying “Health Precautions” when posting articles. Thank you for your cooperation.
[Image 3