Com2uS Japan Co., Ltd., which provides mobile game services for smartphones, has released an update including the implementation of a new survivor “Bell” in the post-apocalyptic game “Walking Dead: All Stars” (hereafter referred to as Warstar). We will inform you that it has been done.
A new survivor “Bell” has appeared, and you can experience “Bell” skills in the “Unknown Survivor Bell” event
Implementation of new content “Discovered Underground Bunker” that allows users from all over the world to compete regardless of the server they belong to
Update commemoration “Survival support 7 days” event is being held [Image 1 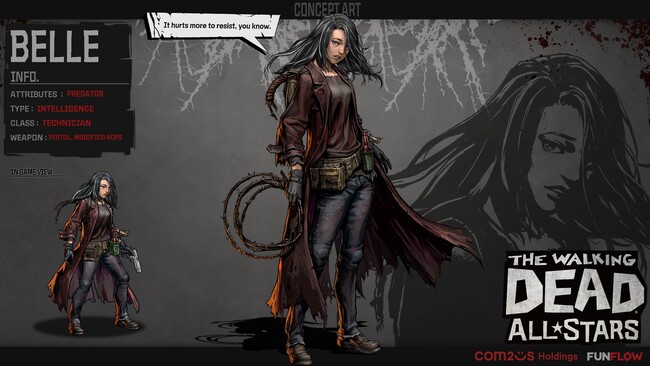 Download the game first!
▼Apple Store
https://apps.apple.com/jp/app/id1570395238
▼Google Play
https://play.google.com/store/apps/details?id=com.gamevil.gvtwd.android.google.global.normal The new survivor “Bell” that appeared in this update is an “evil” type character whose main weapon is a pistol and a rope wrapped with iron wire.
“Bell” can be used at both close and long range, and is a combination of rope and pistol that deals heavy damage to the enemy with the most energy.
To commemorate the appearance of “Bell”, we will hold an “Unknown Survivor Bell” event where you can directly experience the battle organized by “Bell”.
The Unknown Survivor Belle event lets you explore a dungeon with a group of survivors, including Belle. As rewards, you can get items necessary to strengthen your strength, such as “Gold Bars” and “Technical Documents”, so please play by all means.
Also, in this update, a new PvP content “Underground Bunker
Discovered” has been implemented.
‘Discovered Underground Bunker’ is an interpersonal content that anyone can freely participate in regardless of the server they belong to.
Participants are divided into a total of 6 tiers according to the points earned in battle, and for each tier you can get items necessary for recruiting survivors, such as “Type Recruitment Tickets”. If there is a community member who has finished the season at the highest tier, the “Challenger” tier, they will receive a “gold bar” not only for themselves, but also for all members of the community they belong to.
The Uncovered Underground Bunker will be open for a limited time until Tuesday, December 6th at 8:59am server time. Please try your skills against users all over the world.
[Image 2 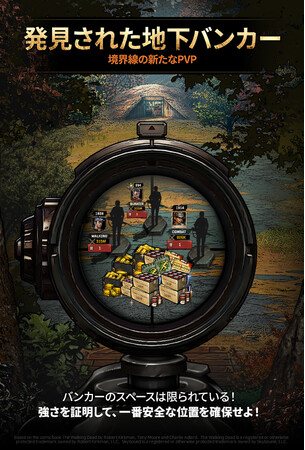 In addition, “Chapter 35” has been added to the main content “World” map. “Chapter 35” is the story of a late-starter team that supports a starter team that has set out to form an alliance with a group of survivors in the northern region.
In addition, a “Survival Support 7 Days” event will be held to commemorate this update. If you log in for a total of 7 days, you can get various rewards such as “Reward Selection Box” and “General Recruitment Ticket”.
In the future, we plan to hold a “Growth Support 14 Days” event. You can get gorgeous items such as “Type Recruitment Ticket” and “Technical Document”, so don’t miss it!
■ What is “The Walking Dead: All Stars”?
This work is a collectible neglected RPG based on the original comic of “The Walking Dead”. Set in a world where walkers are rampant, the battle between survivors is reproduced with vibrant graphics. In addition to the original characters of “The Walking Dead”, the original characters of “Warsta” will also appear in the game. [Reference site]
▼Com2uS Holdings official website
https://jp.com2us.com/holdings
▼ “Walking Dead: All Stars” Official Community
https://twdallstars-community.com2us.com/
▼ “Walking Dead: All Stars” Official Twitter
https://twitter.com/TWDAllstars_JP
Please play “The Walking Dead: All Stars”.
We look forward to your continued support of Com2uS Holdings. Details about this release:
https://prtimes.jp/main/html/rd/p/000000625.000009066.html