Housmart Co., Ltd. (headquarters: Chuo-ku, Tokyo, CEO: Masayuki Hariyama, hereinafter referred to as Housemart), which operates the app “Kawl” that allows you to purchase smart second-hand apartments, has launched “Tokyo 23 Ward Popular Public Elementary School Zone Ranking 2022″ and Kauru’s own calculation based on the asset transition data of used condominiums by public elementary school in the 23 wards of Tokyo” will be announced.
■ About ranking calculation
In October 2022, the Tokyo Metropolitan Board of Education released the “FY2020 Public School Statistical Survey Report [Survey on the Career Paths of Public School Graduates (FY2021)]”. Based on the results of this survey, we calculated the enrollment rate of public elementary school graduates in the 23 wards of Tokyo in 2022 to go on to national and private junior high schools for each ward. Ward” accounted for 51.4%, and this year also ranked first. In response to this result, the app “Kauru”, which allows you to buy and sell used condominiums, has a function to search for used condominiums by school district, based on the school district data set as the desired property purchase conditions, 23 wards of Tokyo We surveyed popular public elementary schools in In addition, we calculated the price of each used condominium in each school district, and compared the price as of November 1, 2022 with the price of November 1, 2019, three years ago. Price increase school district ranking” has been published as Kauru’s own ranking*.
* Only school districts with 10 or more used condominiums for sale as of November 1, 2022 are ranked, and school districts with less than 10 buildings are excluded from the calculation.
Condominium purchaser (cowl user) “Tokyo 23 Wards Popular Public Elementary School District Ranking 2022”
Four prestigious public elementary schools in Bunkyo Ward, which boasts a high enrollment rate, commonly known as “3S1K” ranked high. Prestigious public elementary schools with high popularity are ranked in after 5th place. In addition, Bunkyo Ward ranked in 7 out of the top 20, probably because it has the highest rate of advancement to national and private junior high schools.
[Image 1 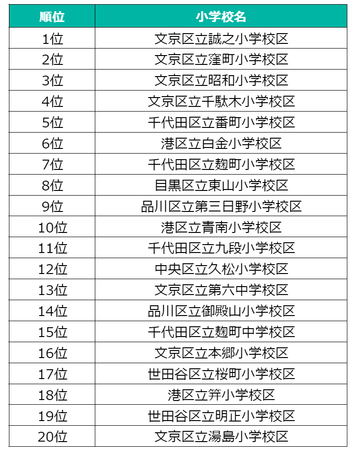 Click here for 21st to 50th places: “Announcement of 50th place in public elementary school popularity ranking in Tokyo in 2022! Is there a correlation with the rise in apartment prices?”
Public Elementary School Districts in Tokyo’s 23 Wards “Second-hand Condominium Price Rising School District Ranking”
Compared to three years ago, the price of second-hand condominiums is generally on the rise, but the school district that saw the most price increase was “Koto Ward Daini Tatsumi Elementary School District,” with a price increase rate of nearly 40%. From the perspective of the asset value of condominiums, we found that popular elementary school districts do not necessarily have a large range of price increases. [Image 2 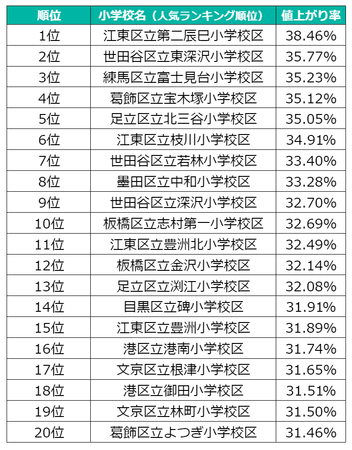 [Comment: Masayuki Hariyama, Representative Director, Housmart Co., Ltd.] The so-called “3S1K” elementary schools in Bunkyo Ward (Masayuki Elementary School, Showa Elementary School, Sendagi Elementary School, Kubomachi Elementary School) have long been popular. “3S1K has a high educational standard” is famous among the child-rearing generation in Tokyo, so educationally enthusiastic households living in other school districts move to enter. A virtuous cycle is repeated in which the immigrated households further raise their achievements in school, and the high level of education of 3S1K becomes even more famous. According to a housing market trend survey released by the Ministry of Land, Infrastructure, Transport and Tourism in 2022, in the case of second-hand condominiums, 49% of people nationwide had lived in other municipalities before purchasing a home. Compared to other real estate types, second-hand condominiums are a real estate type with high migration potential. However, among such second-hand condominiums, 3S1K in Bunkyo Ward has a particularly strong ability to attract people from other municipalities. This year’s “Tokyo 23 Wards Popular Public Elementary School District Ranking 2022” has become a survey result that reaffirms the strength of such 3S1K.
On the other hand, in Tokyo’s 23 wards public elementary school districts “Second hand condominium price increase school district ranking”, Koto Ward No. There was a notable rise in property prices in areas such as elementary school districts, where redevelopment is progressing, and in areas where second-hand condominiums can be purchased at affordable prices among the 23 wards of Tokyo.
3S1K has been very popular for a long time, so it can be said that it is an area where prices are unlikely to collapse even though there will be no sudden price increase in a few years.
■ Profile of Hariyama, Representative of House Smart
[Image 3 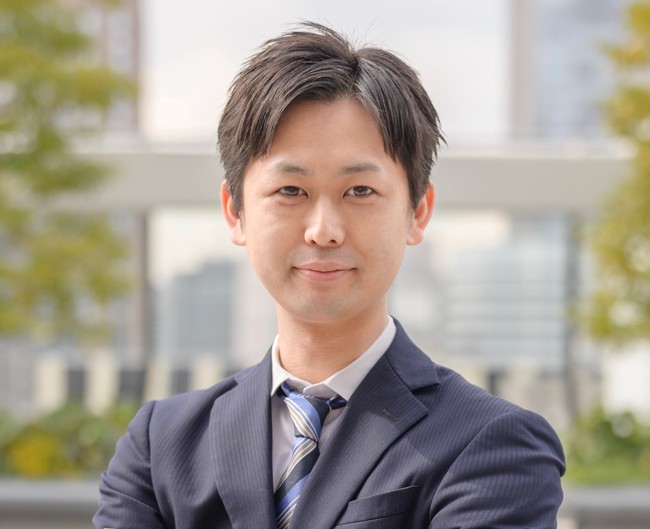 Housmart Co., Ltd.
Representative Director Masayuki Hariyama
After graduating from the Faculty of Economics, Hitotsubashi University, he worked at Open House Co., Ltd., where he was in charge of a wide range of areas, including real estate brokerage, land purchase, and housing planning. After that, he established Housmart Co., Ltd. in October 2014 after working for Rakuten Co., Ltd. [Image 4 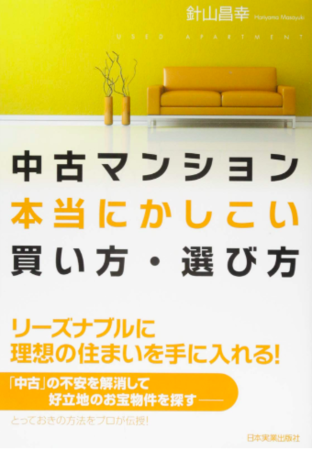