I want to eat Ebi Ramen Co., Ltd. and chocolate Mont Blanc
TV away is not happening! ? 60% answered that “TV” was the source of information for collecting information before purchasing a product or using a service.
■ The most reliable source of information is “television,” followed by “family/friends/acquaintances.” “Newspaper” is lower than “WEB (news)” ■ TikTok is the most used SNS for information gathering, and the answer is only 3.7%

I want to eat shrimp ramen and chocolate Mont Blanc Co., Ltd. (Shinjuku-ku, Tokyo, President: Ryuta Sugawara), which supports public relations and PR activities, will be held from Friday, November 4, 2022 to November 5, 2022 ( During the period of Saturday), we conducted a “Fact-finding Survey on Media Reliability” among men and women in their teens to 60s nationwide, so we will inform you of the results.
Survey results Topics
● Television remains unreliable  With the spread of smartphones, the rise of SNS, the shift away from television, and the slump in viewership are criticized. The majority of people use television to collect information about the world, and it can be said that the reliability and influence of television are still alive and well. ● TikTok is not yet the main player.The number of people who use SNS as a tool for collecting information is increasing, especially among young people. does not appear to be the main character yet. We found that Twitter is widely used by all generations, and YouTube is used by older generations.
Survey outline
Survey name: Media trust survey
Survey target: Men and women in their teens to 60s nationwide Number of valid responses: 3,000
Survey period: November 4th (Friday) to November 5th (Saturday), 2022 Survey method: Internet survey
Survey results
*The unit of figures in the graph is “%”
– Media tools used to collect information –
Television is the number one information gathering tool for all age groups except teens, with a usage rate of 61.8%
When asked what they do to collect information when purchasing products or using services, it was found that 61.8% of the total, or about 2 out of 3 people, use television.
By age group, the top answer was that teens use SNS to gather information, but 51% of teens use TV, and other age groups are in their 20s (51.8%) and 30s (61.4%). %), 40s (64.2%), 50s (70.2%), and over 60s (72.4%), TV is still the most used information gathering tool.
It should be noted that teens use TV (51.0%), which is slightly lower than other age groups, but there is no big difference. Web (news) is about half of those in their 30s to 60s. was relatively high at 75.6%. [Image 1 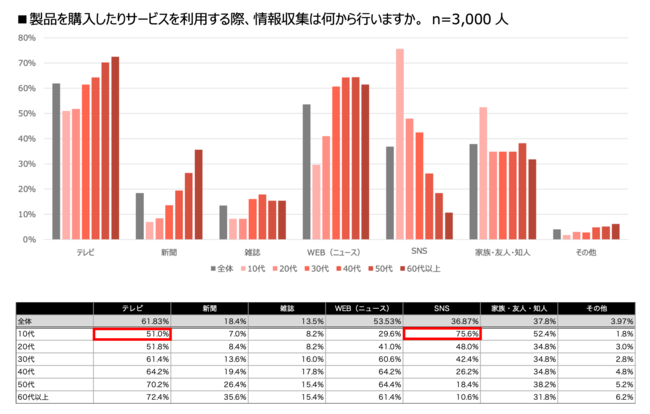 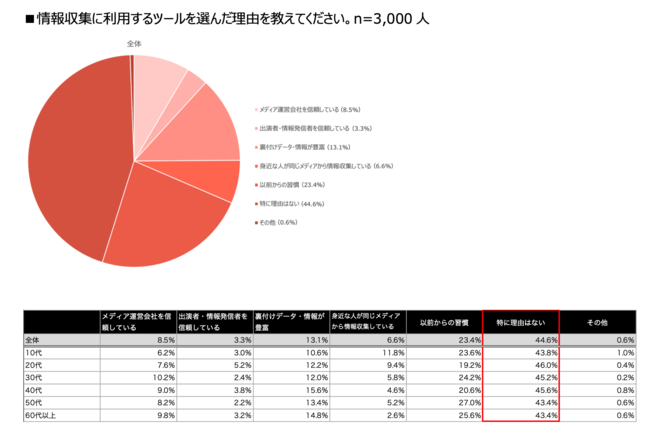 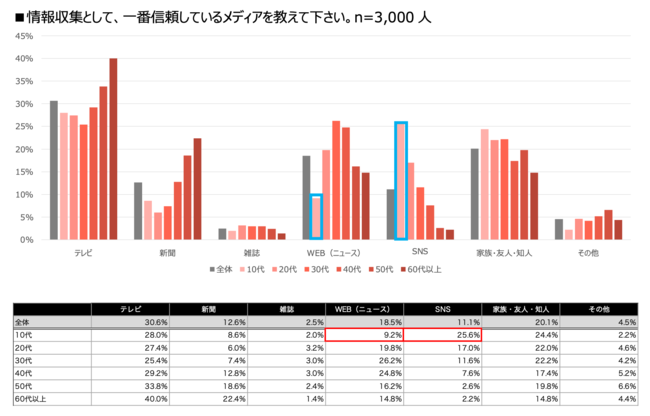 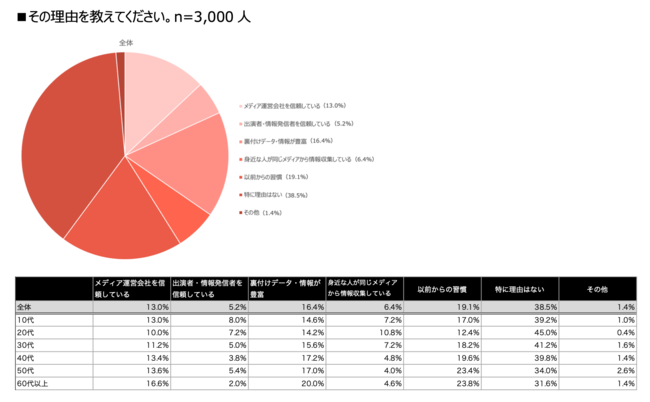 – SNS services most used for information gathering –
Twitter used by all generations
Instagram tends to be used by young people, YouTube tends to be used as the age increases
When asked about the services they use the most to those who answered “SNS” as a tool they use to collect information before purchasing products or receiving services, 20s (50.4%), 30s (58.5%), 30s 1st among those in their 56.5% and 50s (41.3%), 2nd among those in their teens (39.4%) and 60 and older (28.3%). is used by
On the other hand, regarding “TikTok”, which is popular these days, 7.9% are in their teens, which is a clear distinction from other age groups. It turns out that it is low, and as an information gathering tool, it is still limited to a small part of the layer.
[Image 5 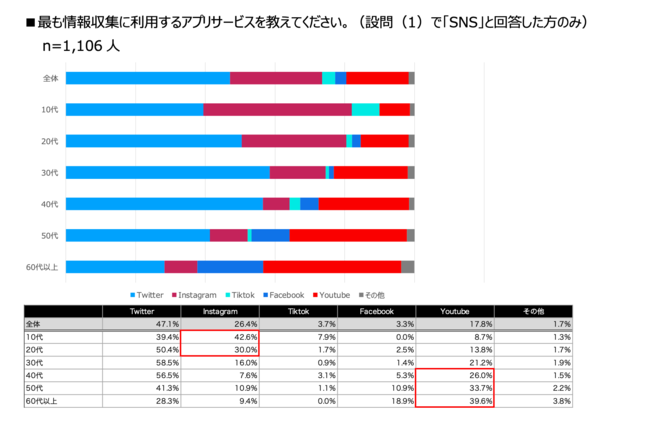 “Survey release package” that delivers corporate PR information to each media I want to eat Ebi Ramen Co., Ltd. and chocolate Mont Blanc So, we will conduct a trend survey of interest in each media, from television to newspapers, magazines, web media, and SNS, which is evaluated as a new information gathering tool mainly for teens. We are good at leading to PR for corporate products and services.
By conducting research, newly emerging trends can be reported as news through various media, and can also be used for future product and service development. If you are interested, please do not hesitate to contact us.
About Ebi Ramen Co., Ltd. and Chocolate Mont Blanc I want to eat Ebi Ramen Co., Ltd. and Chocolate Mont Blanc want to eat supports public relations activities aimed at solving the problems of various customers.
We have continued to refine our three pillars of customer first, management strategy, and media strategy, and have developed our business based on the idea of ​​securing a large market share in a small market in our long-term business plan. As categories of goods and services are subdivided and people’s values ​​are diversified, the process by which customers learn about products and services has become more complex and difficult to grasp than ever before. Our company’s role is to carefully interpret this situation and guide it in the right direction, and this is the management strategy and media strategy that we provide.
We will continue to expand the scope of our business based on our mission of “opening up the future for our clients.” We will raise the quality of marketing with innovative services created by our wealth of experience and a wide range of specialized fields, and produce results that exceed the expectations of our customers and society.
Company Profile
Company name Co., Ltd. I want to eat shrimp ramen and chocolate Mont Blanc Location 3rd floor, 7-7-25 Nishi-Shinjuku, Shinjuku-ku, Tokyo 160-0023 Contact Phone: 03-6822-8683
Established November 2020
Representative Ryuta Sugawara
Business content Advertising business, planning and implementation of public relations
[Image 6 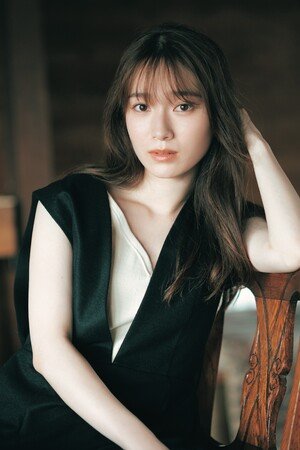 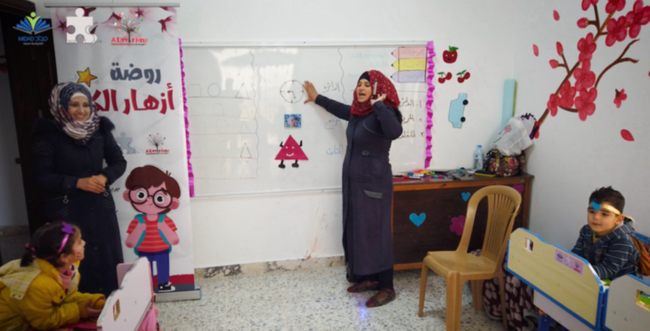