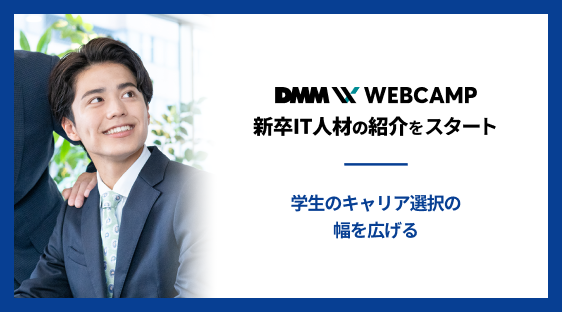 ■Background of the introduction of new graduate IT personnel at DMM WEBCAMP 1. Expanding student needs for attendance
About 30% of the people who take the DMM WEBCAMP IT skill learning course are currently enrolled in college or junior college.
Students who are considering taking the course have the problem that it is difficult to see the path to becoming an IT engineer when choosing their own career. We believe that we should have a mission to maximize the potential of those who come to us, so we have newly established a “Job Hunting Preparation Course” that also provides career support at the same time.
2. Accelerating future shortage of IT human resources
According to a survey by the Ministry of Economy, Trade and Industry, it is estimated that there is a concern that there will be a shortage of IT human resources on the scale of 400,000 to 800,000 people in the future.
DMM WEBCAMP, which has been providing services as an IT school for working adults, has accelerated the starting point for producing IT human resources and also provides job hunting support for students, expanding the scope of services and producing more IT human resources. We aim to solve the shortage of human resources.
[Image 2 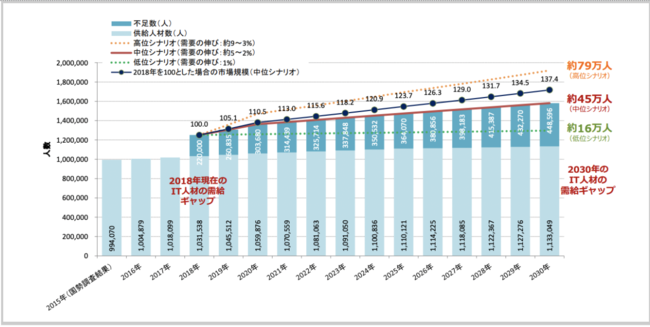 Source: Ministry of Economy, Trade and Industry FY2018 infrastructure development related to data-driven society in Japan (Survey and analysis project for supporting the development of IT human resources) “Survey on supply and demand of IT human resources”
https://www.meti.go.jp/policy/it_policy/jinzai/houkokusyo.pdf 3. Existence of companies struggling to recruit IT human resources for new graduates
While the shortage of IT human resources has become an issue, the importance of promoting DX is increasing in various industries and business categories in order to solve social issues. The number of engineer recruitment quotas is not sufficient, and there is a demand to hire students from liberal arts and students who have no
programming experience.
However, by joining the company as an IT engineer with no programming experience, the gap between the longing for the job of an IT engineer after joining the company, the continuous acquisition of skills, and the misunderstanding of the skills required from inside and outside lead to early resignation. There are also issues such as a shortage of human resources.
■Characteristics of students taking the Job Hunting Preparation Course In the “Job Hunting Preparation Course”, in addition to acquiring IT skills, we provide opportunities to think about the future after employment through self-analysis, and introduce job offers for new graduates. (*1)
In this course, you can acquire the stance of an active human resource by learning “the ability to complete programming learning” and “the ability to clarify your career image and career plan after joining the company”, and IT engineers after joining the company. It is possible to produce more human resources who can think and act on their own without causing a gap in the image of the job.
Through this, we aim to accelerate the resolution of recruitment issues for new graduate IT human resources that companies face, and aim to realize a future full of our vision of “making life the best story through learning and work.”
(*1) Conditions are set for job introductions. For details, please contact us for a free consultation.
[Image 3 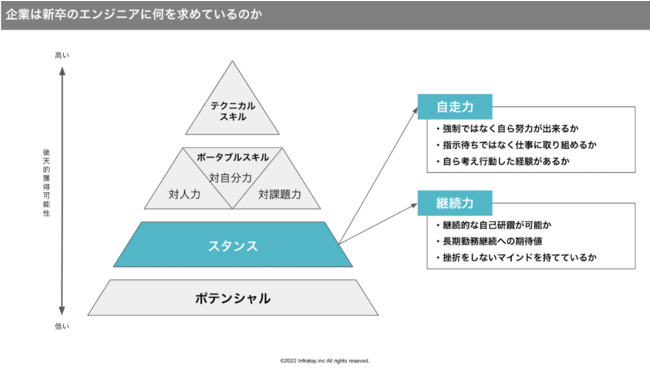 In addition, some students who are considering taking a job-hunting preparation course are worried that it may be difficult to become an IT engineer if they have a liberal arts background, or that they cannot become an IT engineer unless they major in programming. We also have a voice. We aim to dispel such stereotypes surrounding students, and realize a future where more human resources can choose a wide range of careers and can be active as IT engineers.
■ New Graduate IT Recruitment
https://web-camp.io/agent/newgraduate/
■About the job-hunting preparation course
https://web-camp.io/courses/newGraduate/
■ About DMM WEBCAMP
[Image 4

DMM WEBCAMP is a school that provides “IT skill learning service” and “job change support service” including programming, which opened in 2014. To date, more than 5,000 IT personnel have been produced, and graduates are making use of the skills they have acquired to realize their “ideal careers.”
We have a learning lineup for those who want to acquire a variety of IT skills and enrich their work and life, as well as “career change support” aiming to change from a different occupation to an engineer. ■ About Infratop Co., Ltd.
[Image 5

Founded in 2014, joined DMM.com in November 2018. Based on the vision of “making life the best story through learning and work,” we provide opportunities and growth for those who want to open up their lives to “the best story.”
Learning is a way to maximize your potential. The skills you acquire enable new ways of living. We will continue to be a partner that is easy for as many people as possible to contact, learn, and want to meet every day.
■ Infratop Co., Ltd. Company Profile
Company name: Infratop Co., Ltd. https://infratop.jp/
Company location: 3-2-1 Roppongi, Minato-ku, Tokyo Sumitomo Realty & Development Roppongi Grand Tower 23rd floor
Phone number: 03-6869-4700
Date of establishment: November 19, 2014
Capital: 190 million yen (including capital reserve)
Representative: Ayanobu Oshima, Representative Director and CEO Business description: Education business, human resource-related business