LINE Corporation
LINE MUSIC has surpassed 100 million songs delivered! The song that has been set as the most LINE profile BGM in 7 years is Official HIGE DAN dism “Pretender”
Announcing the music ranking unique to LINE MUSIC for the 7 years since the service started / From today, “Mossari Mosao x LINE MUSIC” free LINE stamps will be presented

LINE MUSIC Co., Ltd. (Location: Shinjuku-ku, Tokyo, President: Jun Masuda) has announced that the music streaming service “LINE MUSIC” (https://music.line.me/) operated by the Company has been operating since the start of the service. We are pleased to inform you that the number of songs delivered so far has exceeded 100 million songs. In commemoration of this, we will announce the ranking of three functions unique to LINE MUSIC, “profile BGM”, “karaoke”, and “chaku-uta (R)”, as well as a special site (https://music.line.me/lp/cp/
100million.html) will be released.
Music ranking unique to LINE MUSIC
Based on 7 years of data since the service started in 2015, we have announced the ranking of the three most popular features of LINE MUSIC, “Profile BGM”, “Karaoke” and “Chaku-Uta (R)”!
[Image 1 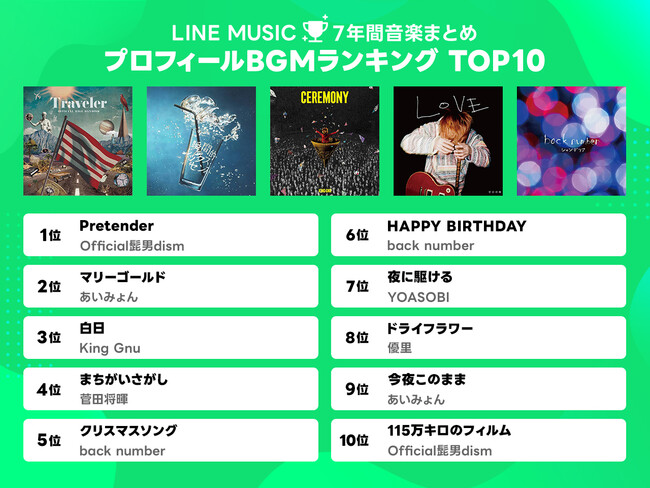 The most set song in the “Profile BGM” function is Official HIGE DAN dism “Pretender”.
This song was written as the theme song for the movie “The
Confidenceman JP -Romance Edition-” in 2019, and it has become popular with users of all ages as a classic love song that you can’t forget once you hear it. In addition, songs that represent the recent music scene such as Aimyon’s “Marigold” and King Gnu’s “Hakujitsu” ranked in, as well as seasonal and birthday commemorations such as back number “Christmas Song” and “HAPPY BIRTHDAY”. As a result, many users set it.
[Image 2 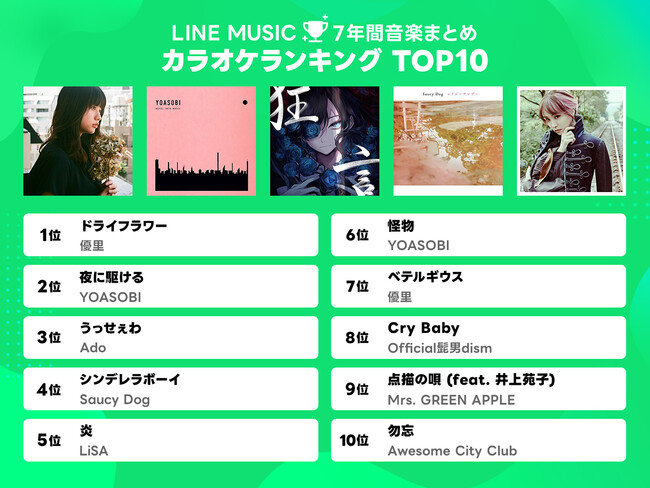 In the “karaoke” function, last year’s hit song Yuri “Dried Flower” was sung by the most users. It seems to have been sung by many users, with the momentum of recording a long hit in the music playback rankings such as last year’s month and year.
In addition, songs such as the hit song YOASOBI “Yoru ni Kakeru” and Ado “Usseewa” that are difficult to sing at karaoke at high tempo continued. In addition to the voices such as “I challenged difficult songs many times because I am at home”, users also said that “I enjoyed refreshing during the self-restraint period” as a function to fully enjoy karaoke even at home time due to the corona sickness. was given.
[Image 3 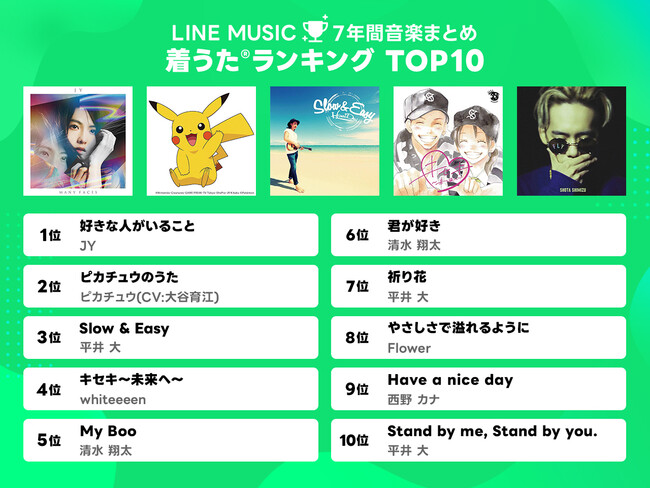 In the “Chaku-Uta (R)” function, JY “Having someone you like” was set by the most users.
The song was popular as the theme song for the Fuji TV drama “Suki na Hito ga Koto”, but its cute music and positive lyrics full of maiden heart are characteristic, and it is set mainly for young female users. I was. Pikachu (Ikue Otani) “Pikachu no Uta” ranked second. The song was sung by the Pokemon character Pikachu, and all the lyrics consisted of “Pikachu” and “Pika” just like the character.
In addition, in order to enjoy communication with lovers, many love songs of yesteryear also ranked in.
Let’s look back on the ranking of LINE MUSIC for 7 years
[Image 4 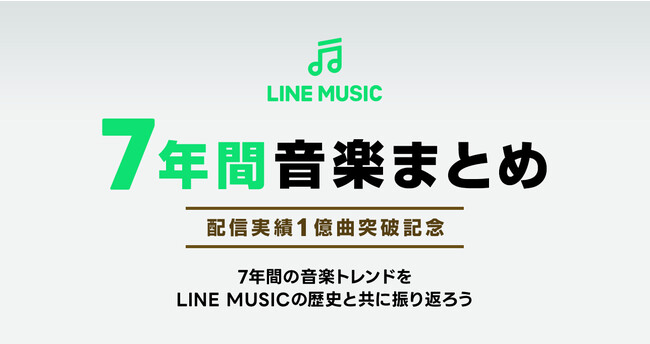 Special site: https://music.line.me/lp/cp/100million.html
We are releasing content that allows you to look back on the history of LINE MUSIC and music trends from 2015, when LINE MUSIC was born, to 2021!
“Mossari Mosao x LINE MUSIC” Free LINE Stamp
[Image 5 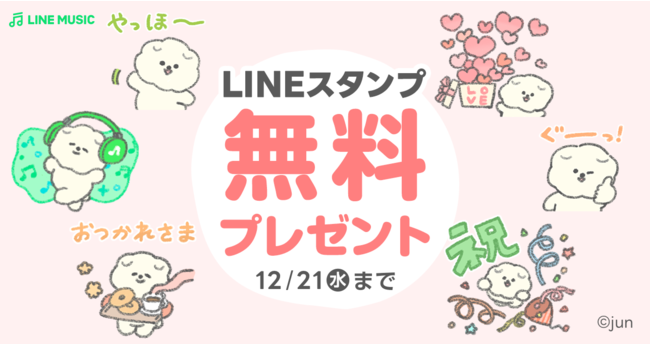 In addition, to commemorate the breakthrough of 100 million songs distributed, from November 22nd (Tuesday) to December 21st
(Wednesday), we will collaborate with the popular character “Mossari Mosao” and add LINE MUSIC’s official LINE account as a friend. Then, you will receive a LINE stamp for free!
Click here for details: https://line.me/S/sticker/26737
In addition, LINE MUSIC official twitter
(https://twitter.com/LINEMUSIC_JP) is holding a special campaign to present Amazon gift certificates and wireless earphones by lottery. Please feel free to apply.
* “Chaku-Uta (R)” is a trademark or registered trademark of Sony Music Entertainment Inc.
[Overview of the LINE MUSIC app]
“LINE MUSIC” is one of the largest music streaming services in Japan that allows users to listen to over 100 million songs in a wide range of genres, both Japanese and Western, anytime, anywhere, according to the usage scene and mood. In addition to “listening” to music, “LINE MUSIC” allows you to enjoy watching music videos (MVs) and karaoke functions – listening, watching, singing – music in its entirety. With the industry’s fastest*1 real-time ranking, you can see the “now” of music, and you can meet music according to your mood with a “playlist” that collects popular songs by theme, such as hit songs from “that time” and seasons. I can. In addition, by linking with “LINE”, you can set your favorite songs to your LINE profile and chat room, and also link with LINE Stamp Premium, so if you are a paying user of LINE MUSIC, you can use the target LINE stamp for free. We are bringing you a new music experience. In addition, based on the desire to provide opportunities for artists and fans to get closer, we regularly plan original events and gift campaigns for LINE MUSIC paid users * 2. This service is partly carried out jointly with LINE Corporation and Z Entertainment Corporation.
*1 “Real-time ranking” that is aggregated every hour
*2 Users who are in the free trial are also eligible.
About the LINE MUSIC plan: https://store.line.me/family/music/ Official site: https://music.line.me/about/
App Store: https://itunes.apple.com/jp/app/linemusic/id966142320?mt=1
Google Play: http://play.google.com/store/apps/details?id=jp.linecorp.linemusic.android Official Twitter: https://twitter.com/LINEMUSIC_JP
Official Instagram: https://www.instagram.com/linemusic_jp
Official note: https://note.mu/linemusic
Details about this release:
https://prtimes.jp/main/html/rd/p/000004093.000001594.html