Netmarble will become a new fighter today, November 22nd (Tuesday) in the super exhilarating action RPG “THE KING OF FIGHTERS ALLSTAR” (KOF ALLSTAR) for smartphones. We have updated to add “XV Haohmaru” and “XV Nakoruru”.
[Image 1 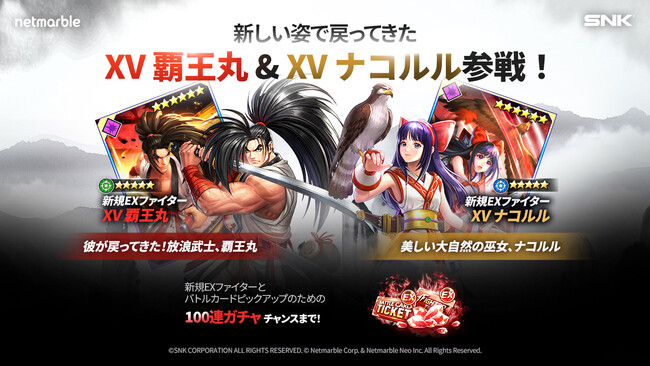 New EX fighters “XV Haohmaru” & “XV Nakoruru” participate!
The newly released balanced fighter “XV Haohmaru” has a leader skill that increases the [Extreme] fighter’s active skill damage and finish skill damage to a certain level, as well as [fainting/freezing] immunity and [electric shock/holy]. He has a special skill that recovers HP when attacked in this state, saves a portion of HP each time he is hit, and recovers HP when an active skill hits.
Similarly, the balanced fighter “XV Nakoruru” has a leader skill that increases the attack power of the [blue attribute] fighter to a certain level, and every time an active skill is used, the finish skill cooldown time is reduced and the enemy who received physical damage Has a special skill that grants [Mark] to for a few seconds. [Image 2 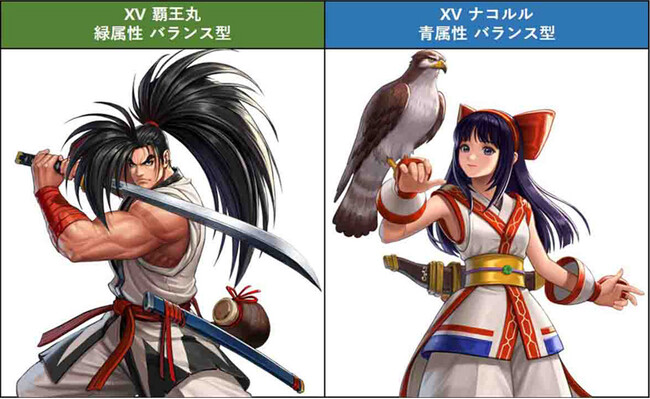 ・”KOF ALLSTAR” New EX Fighter “XV Haohmaru” & “XV Nakoruru” PV
[Video 3: https://prtimes.jp/api/movieim.php?url=www.youtube.com/watch?v=BkUyhqfTPFg] Add a new battle card
A new battle card will appear in accordance with the participation of the new fighter. “XV Haohmaru” has a special card that increases the damage amount when used, and “XV Nakoruru” has a special card that resets the finish skill cooldown when used.
In addition, we have added new battle cards such as set cards and option cards. [Image 3 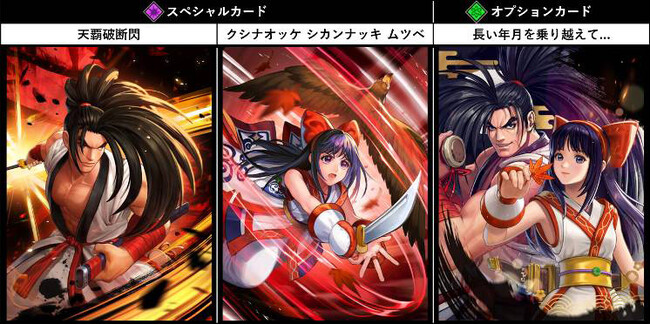 For details on this update, please check the announcement on the “KOF ALLSTAR” official forum.
・ “KOF ALLSTAR” Official Forum: November 22nd (Tuesday) Information on update details
https://forum.netmarble.com/kofas/view/4/15604
◆ New EX Fighter Participation Commemorative Event Held!
To commemorate the participation of “XV Haohmaru” and “XV Nakoruru”, we will hold many events where you can earn various rewards that are useful for gameplay.
Rush Event: Arashi no Samurai
You can exchange “Arashi Samurai Rush Event Coins”, which can be obtained by clearing rush stages of various difficulty levels, for items such as the event set battle card “Raptor’s Instinct” (types 1 to 3). Also, at the end of each stage, you can get a “Nakoruru Dice” that can be used in the Sugoroku Event.
[Image 4

-Challenge Quest: Challengers from the past
This is a special quest that opens when either the new fighters “XV Haohmaru” or “XV Nakoruru” are acquired. Organize designated fighters and challenge to break through each stage consisting of 30 stages. You can get rewards such as “Nakoruru Dice” and “Team Samurai Badge” when you clear each stage for the first time.
[Image 6

Cooler has prepared ♪ Cumulative login bonus
During the event period, if you log in to the game every day, you can get rewards such as “Team Samurai Badge” and “Haohmaru Souvenir Fragment” as materials for the production event, in addition to advanced hammers.
[Image 7 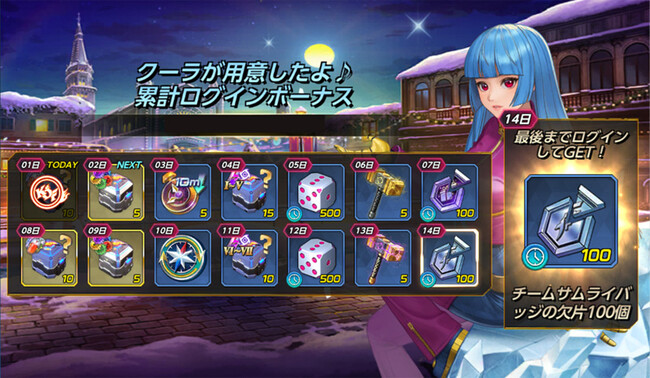 – Together with Nakoruru! sugoroku event
By throwing the “Nakoruru Dice” obtained in various events and advancing the number of squares that appear, you can earn rewards such as rubies and strengthened hammers on the squares that stop. [Image 8 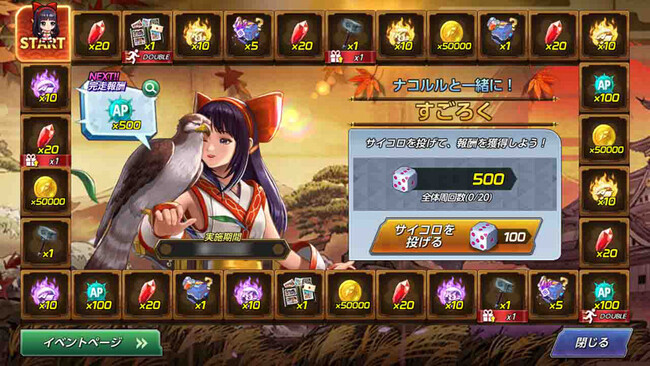 In addition to this, various events such as production events, EX event picture books, and Black Friday commemorative events are being held. For details on each event, please check the announcement on the “KOF ALLSTAR” official forum.
For details on each event, please check the announcement on the “KOF ALLSTAR” official forum.
・ “KOF ALLSTAR” Official Forum: November 22nd (Tuesday) Event Information  https://forum.netmarble.com/kofas/view/9/15603
◆What is “THE KING OF FIGHTERS ALLSTAR”◆
“KOF ALLSTAR” is a mobile action RPG where you can easily enjoy flashy skill actions and exhilarating combo actions from the fighting game series “THE KING OF FIGHTERS”. A smartphone game title in which characters from successive series appear, fighters from “KOF ’94” to “KOF XIV”, the 14th numbering title in the KOF series, have the highest level of graphic quality while maintaining the original expression. We will participate in Not only the in-game sounds, but also the special moves, super special moves, and combos are faithfully reproduced from the original. In addition, “KOF ALLSTAR” original fighters and stories will also appear.
“KOF ALLSTAR” can be downloaded on Google Play and App Store in over 175 countries around the world. In addition to Japanese, it supports languages ​​such as English, Taiwanese, Indonesian, Thai, Spanish, Italian, French, Portuguese, Russian, and German.
■ “KOF ALLSTAR” app download URL
[App Store]
https://itunes.apple.com/jp/app/id1137528731
[Google Play]
https://play.google.com/store/apps/details?id=com.netmarble.kof ■ “KOF ALLSTAR” Official Site
https://kofallstar.netmarble.net/ja
■ “KOF ALLSTAR” Official Forum
https://forum.netmarble.com/kofas
■ “KOF ALLSTAR” Official Twitter
https://twitter.com/KOF_ALLSTAR
■ “KOF ALLSTAR” Promotion Movie
[Video 4: https://prtimes.jp/api/movieim.php?url=www.youtube.com/watch?v=Q7R2aYemMT4] 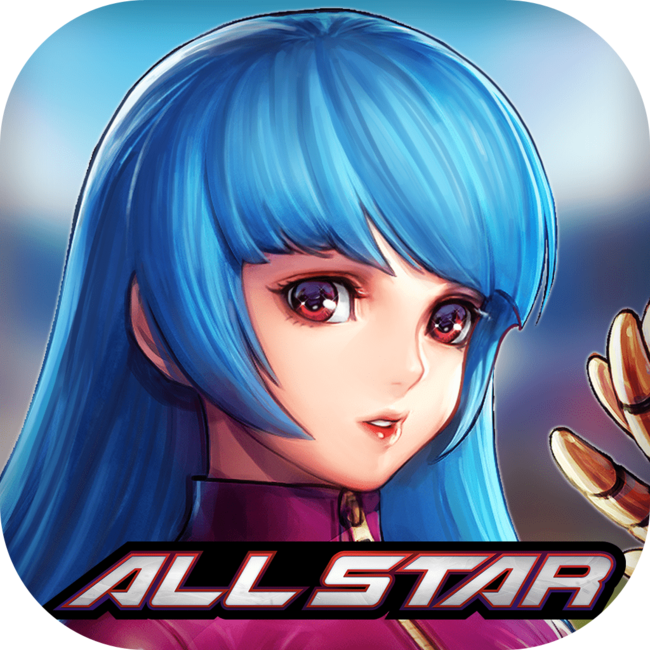 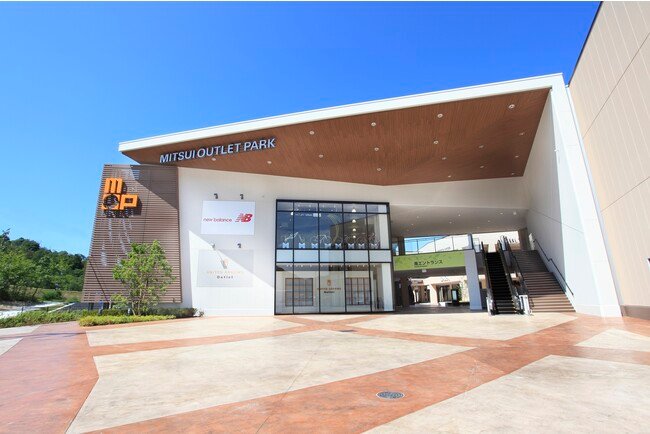 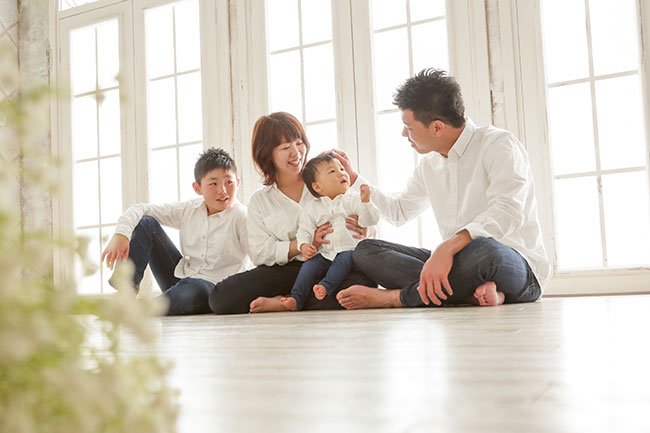