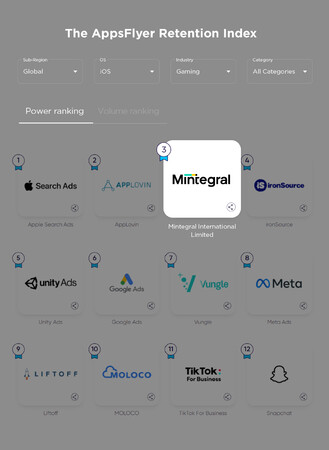 Similar to the iOS Category Retention Index, AppLovin, Mintegral, and ironSource maintain high numbers in the iOS Game Track Retention Index. It ranked 3rd, and moved up 3 ranks to 3rd on the scale chart. In the Game Retention Index for iOS sub-categories, Mintegral dominated the hyper-casual game category, which it has built up over the long term, and ranked third in the size of hyper-casual games. In terms of mid-core games and casual games, Mintegral has a clear advantage over other platforms, and ranks second in terms of strength and scale in the two sub-categories of game trucks. We have a good track record in terms of both quantity. Furthermore, in terms of hardcore games, where quality is the most important factor for users, we have secured the 2nd place in the ability chart and the 3rd place in terms of scale after ASA and Meta Ads.
[Image 2

▼Mintegral, which should continue to pay attention to the Android market, is developing well▼
Before explaining the Android game charts, it should be mentioned that the Android market budget decline in the first half of this year was almost the same as that of iOS, and in addition, Android saw a significant decline in the two top platform markets. With the rise of other platforms, traffic volume has changed significantly. You have more flexibility and control when delivering than before. In addition, according to Tenjin’s recently released Q2 Global Mobile Ad Revenue Channel Rankings, Android surpassed iOS by 8% in terms of total ad revenue in the April-June quarter. According to Q3 New Insights for Casual Gaming Mobile Marketing, Android (57%) also outperformed iOS (43%) in terms of advertising spend.
Overall, although the Android budget decreased in the first half of the year, it gradually recovered from the July-September quarter, and advertising sales were strong, so the current Android market is still worth paying attention to for developers. It can be said that it is expensive.
[Image 3 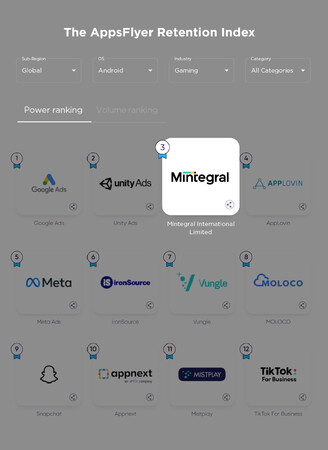 On the Android game retention chart, Mintegral performs as well or better than the iOS end. In the Android Game Retention Ability Chart, it moved up 1 to 3rd place, and in the Size Chart, it moved up 3 places to 2nd place, becoming the most successful platform in the Android game ranking after Google Ads. Mintegral’s growth in the Android game track can be largely attributed to traffic diverts from many casual games withdrawing from TikTok For Business, Unity Ads and Meta Ads.
Mintegral is basically in the top 3 Android games in terms of mid-hardcore games, casual games, and hyper-casual games. Long-term growth potential is expected. In a side-by-side comparison, Mintegral proves to be the most promising platform for mid-hardcore and casual games on Android. After the turmoil in the first half of the year, the Android market, where developer budgets have been reallocated, is clearly less competitive than it was in the second half of last year. If you enter at this timing, there is a high possibility that you will be able to gain momentum before the next upturn comes.
▼Developing new markets while remaining in the red ocean▼
Despite the adversity, game developers’ willingness to spend as much money as possible on mobile advertising has to do with the fact that mobile and globalization has made the gaming market more competitive. Under these circumstances, developers should keep an eye out for red oceans, but also for new markets.
Each category chart in this report covers 11 countries and regions. Focusing first on the North American and Western European markets, which are the red oceans, the performance in both markets shows that Mintegral is demonstrating outstanding capabilities on both Android and iOS. Next, let’s turn our attention to emerging markets such as Africa, the Middle East, Latin America, Southeast Asia, India and Indonesia. Statistical analysis shows that apart from Google, Meta Ads and ASA, Mintegral, Unity Ads, AppLovin and ironSource top each category chart, with Mintegral being the top three most frequently. . In other words, Mintegral was quick to recognize the importance of emerging markets and is actively developing them. Looking at Mintegral, which is currently attracting the most attention in emerging markets, Android’s dominant markets are concentrated in Africa, Latin America, India and Indonesia, and Southeast Asia. The percentage of hardcore is also about the same. The dominant markets for iOS are concentrated in Central and South America and the Middle East, where the mid-core game performance chart ranked first, the casual game performance chart ranked second, and the hyper-casual game performance chart ranked third. It is Mid-hardcore game developers with a stable dominant market can tap into new markets and build further growth with the help of advertising platforms.
[Image 4 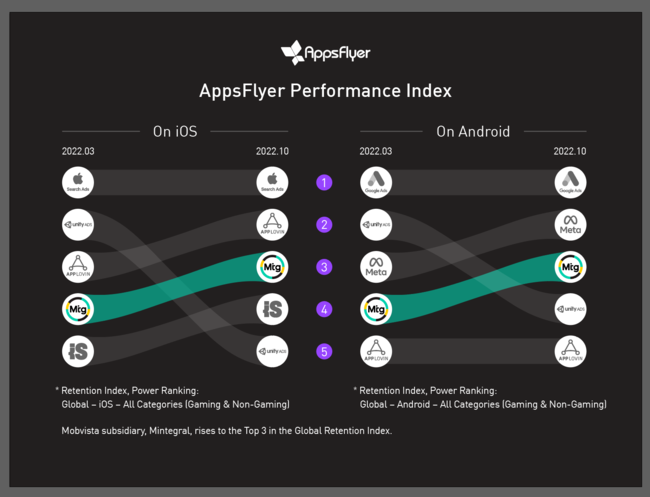 summary
Despite a turbulent first half, the mobile marketing industry is still in a bit of a downward trend overall, so more challenges lie ahead. As advertising strategies become more complex, mobile ad optimization requires more sophisticated delivery strategies and platform tools. Comprehensive analysis of AppsFlyer’s 15th Annual Performance Index shows that although Google and Meta have lost market share, they remain the most core channels for Android and should continue to be watched closely. . Mintegral is also considered one of the fastest growing platforms to watch this year. Effectively combining and optimizing top and middle strong channels in a specific distribution process, rather than a single distribution strategy, will help overcome this adversity.
About Mintegral
Mintegral is a mobile advertising platform that provides user acquisition, monetization and creative solutions for mobile
advertisers and publishers worldwide. Mintegral contributes to global growth through innovative products such as SSPs, DSPs, DMPs, ad exchanges, advertiser self-service platforms and creative automation platforms. (https://www.mintegral.com/jp)
Details about this release:
https://prtimes.jp/main/html/rd/p/000000022.000056275.html