Neutral Works Co., Ltd. (Chigasaki City, Kanagawa Prefecture, Representative Director: Satsuki Miki, hereinafter “Neutral Works”), which supports digital marketing, has 214 men and women who are in charge of SNS operation in the retail industry or who are aware of the usage status. We conducted a fact-finding survey on “SNS utilization in the retail industry”.
Summary of survey results
[Table 2: https://prtimes.jp/data/corp/41566/table/37_1_ff11e6ce5447b696738198a3a0c57559.jpg ]

Survey details
▼ Read the full survey results
https://n-works.link/blog/marketing/report-questionnaire-9
Q. How has the budget for official SNS accounts changed over the past year? [Image 1 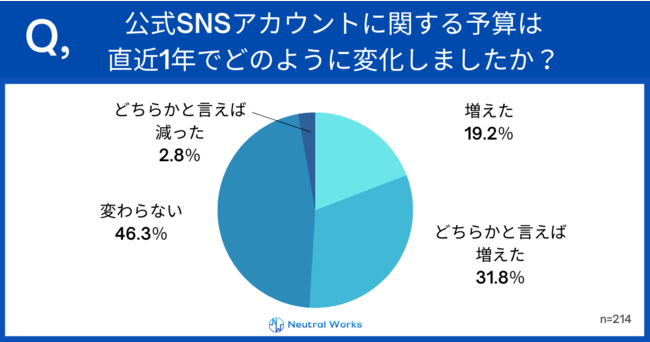 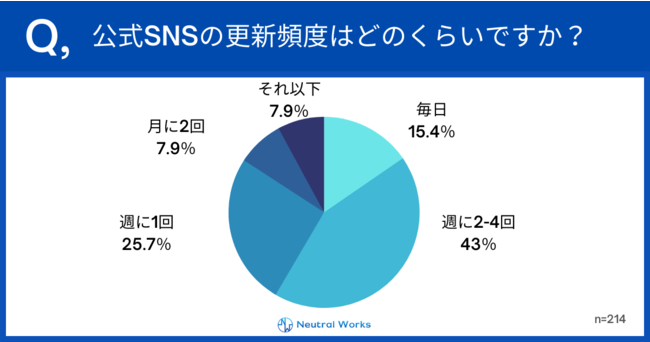 About 60% of the companies updated frequently, with 15.4% of them updating “daily” and 43% of them “2-4 times a week”. Furthermore, including companies that update at least once a week, the percentage is as high as 84.1%, indicating that many companies update their SNS every week.
Q. Do you feel the effect of using SNS?
[Image 3 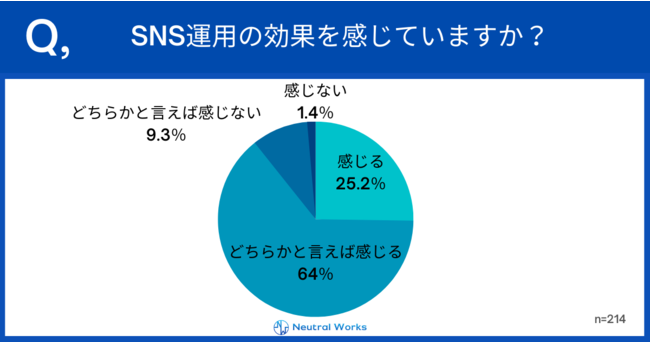 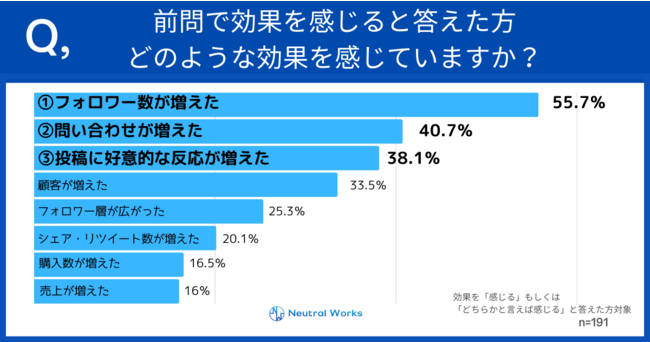 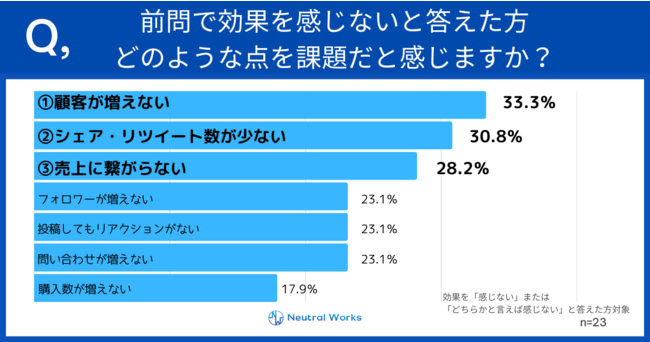 For those who answered that they did not feel the effect of SNS operation in the previous question, the number one issue was “not increasing the number of customers”, and the third was “not leading to sales”. It turned out that the inability to obtain the desired number of customers and sales results is a major factor in not realizing the effects of SNS operation.
Q. Please tell us about the challenges under the current system. (multiple answers)
[Image 6 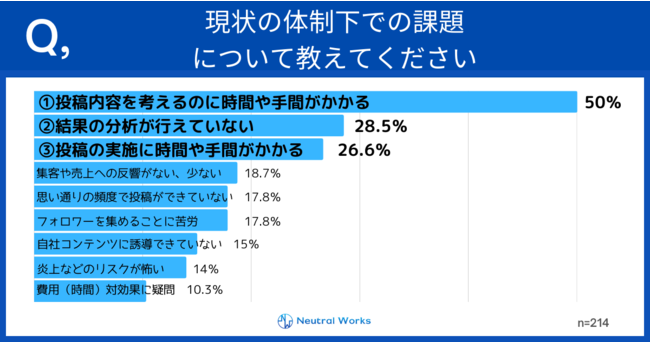 50% of all companies answered that it takes time and effort to think about what to post. In addition, 28.5% cited the problem of “not being able to analyze the results”, and it was found that even if they took time and effort to post, they did not get around to analyzing the results.
In addition, when asked about the measures currently being taken to solve the above issues, the following voices were gathered.
All the staff think about the contents of the post and bring their own ideas. I’m studying by watching SNS of the same industry.
We are looking for content to tweet with a crowdsourcing service. In response to this social media post, there are many voices that seem to have a positive attitude toward solving problems, such as asking for cooperation from inside and outside the company other than the person in charge, and studying by looking at other companies. The following voices were also collected.
The current situation is that no countermeasures have been taken due to budget and human resources.
Posting is done outside business hours, but it is difficult to respond to replies.
I have posted it, but I haven’t been able to analyze it, so I can’t think of an efficient measure.
In this way, there were a certain number of people who were struggling to implement solutions even though they were aware of the issues in operating SNS alongside their daily work. Although the use of SNS in the retail industry is positive as a whole, we found that there are many people who have an awareness of issues mainly in terms of resources.
Other questions
・Please tell us the platform that you operate as the official SNS account of the company or service.
・Please tell us the reason and purpose of having the above SNS account. ・What do you focus on the most while operating the official SNS account? ▼ Click here for more survey results.
https://n-works.link/blog/marketing/report-questionnaire-9
Survey outline
Survey target: Persons in charge of operations using SNS in the retail industry Survey method: Internet survey
Survey period: November 9th to November 14th, 2022
Number of samples: 214
Summary of survey results
Through this survey, we found that SNS operation is effective in increasing the number of followers and inquiries in the retail industry, but we found that there are few companies who feel that it leads to sales.
In addition, it was pointed out that it takes time and effort to post, and despite the effort and budget spent on posting, it has not been verified or analyzed, and companies have not led to effective measures after that. I also found out that there are a lot of chances and lost opportunities.
In order to maximize the effect of SNS, the key is how to operate it in a way that leads to sales.
Furthermore, it is considered that the point of SNS operation in the retail industry is to achieve results by repeating efficient and effective management by highly specialized personnel and optimal improvements through correct analysis.
▼ Click here for the rest of the survey results.
https://n-works.link/blog/marketing/report-questionnaire-9
In order to connect SNS to sales, it is important to operate effective SNS advertisements that match the appeal axis and produce high-quality creatives.
Neutral Works has a large number of industry-leading consultants who have worked at major Internet advertising agencies, and we provide one-stop operation from strategy formulation to creative production and advertisement operation, and achieve results. In addition, a dedicated director is assigned to each customer company, so we can solve the customer’s business issues in a side-by-side manner with thorough support and quick response.
Leave it to Neutral Works for successful SNS advertising operations that maximize sales.
・ SNS advertising management agency https://n-works.link/sns-advertising/ ・ Facebook advertising management agency
https://n-works.link/facebook-advertising/
About Neutral Works
Company name: Neutral Works Co., Ltd.
Representative: Satsuki Miki
Head office location: 1-11-56 Hamatake, Chigasaki City, Kanagawa Prefecture 253-0021
Established: December 2016
Business description: Digital marketing business (branding/strategy planning/site construction/advertising operations/content
marketing/SEO/white paper) operation of web marketing media “QUERYY” (https://n-works.link/blog)
Operation of the migration support platform “I want to migrate” (https://ijyu-sien.com/)
Recruitment business (License number: 14-Yu-301561)
Details about this release:
https://prtimes.jp/main/html/rd/p/000000037.000041566.html