The specified non-profit organization Kirin Children’s Cheerleader (Izumisano City, Osaka Prefecture, Representative Director Hirotaka Mizutori) will hold a lecture by Mr. Kazuki Obata at Ebno Izuminomori Hall in Izumisano City on Saturday, November 12, 2022. did. A total of 80 people who did not attend school, their families, school officials, and supporters participated in the lecture. Mr. Obata talked about many topics such as support for school refusal and education issues, such as the message “#Trump is not unhappy”, and the participants listened intently.
[Image 1 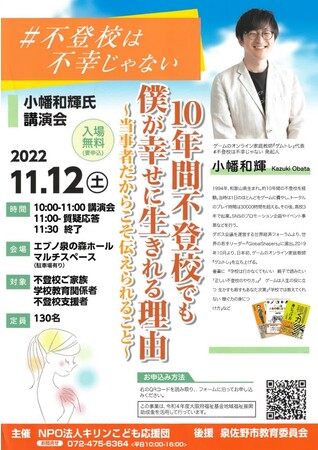 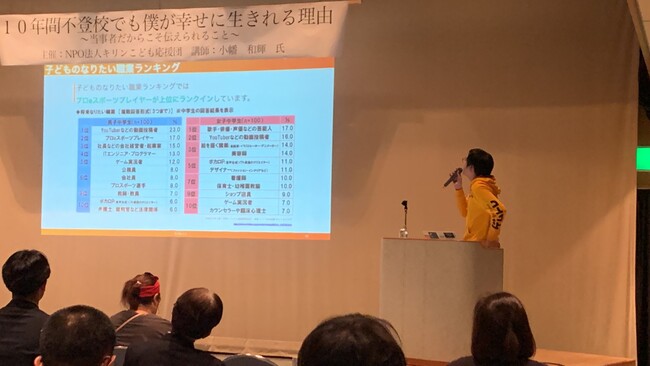 People who listened to the performance gave various reactions, such as nodding their heads and showing surprised expressions.
[What was said at the lecture]
・School refusal is no longer a special thing.
The definition of school refusal refers to children who do not go to school for 30 days or more a year, but children who do not actually go to school
There are so many, and they are increasing year by year.
I want you to know about the reality of school refusal as well as raising children.
・Children’s words “I don’t want to go to school” are SOS
If you miss hearing these words, you may close your heart and not be able to speak. For children who don’t want to go to school
It’s a very big word, and if you have knowledge of school refusal, you can notice a child’s SOS.
・ The most common complaint from children is that their families do not understand
Mr. Obata said that the hardest part of not attending school was when he forced himself to go to school.
・”Together game” is comparable to “parent and child playing catch” “Playing catch with parents and children” is the same as “playing a game together” in modern times.
“It’s part of the application.”
Enjoying something together makes it easier to communicate, and children can play games
So, the distance becomes closer at once and it becomes easier to talk. ・Suitable/not suitable for school There are only suitable and unsuitable for truancy
For those who are more efficient with online work, they are better at thinking for themselves than following instructions.
“There are various pros and cons.” It would be nice to be able to choose for myself from now on.
Through various talks, his explanations using his own experiences and numerical values ​​were persuasive, and everyone was concentrating and listening intently.
[Image 3 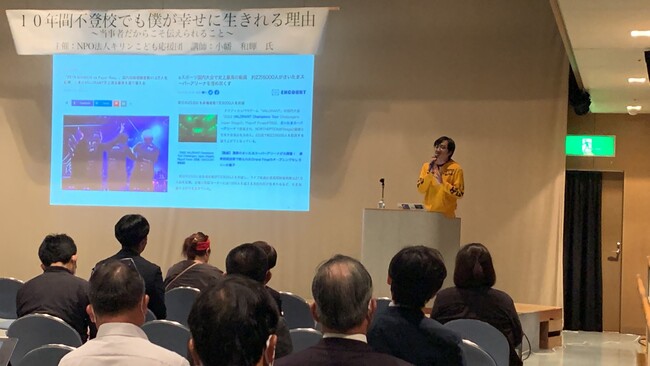 [Impressions of those who participated]
・Many of the people involved sympathized with the story that it was because they had experienced it, such as “I learned a lot”, “I can sympathize”, and “It changed my way of thinking about refusal to go to school”. There were many comments that conveyed Mr. Obata’s positive energy.
・Family members concerned said, “I felt the importance of parental involvement”; I realized that I thought I was admitting the game.” ・School officials, supporters, and other people said, “I was able to update to change my perception,” “As a school official, I want to propose education that is close to children.” We received many comments such as, “The breadth (knowledge) when facing each other has expanded.”
[Image 4 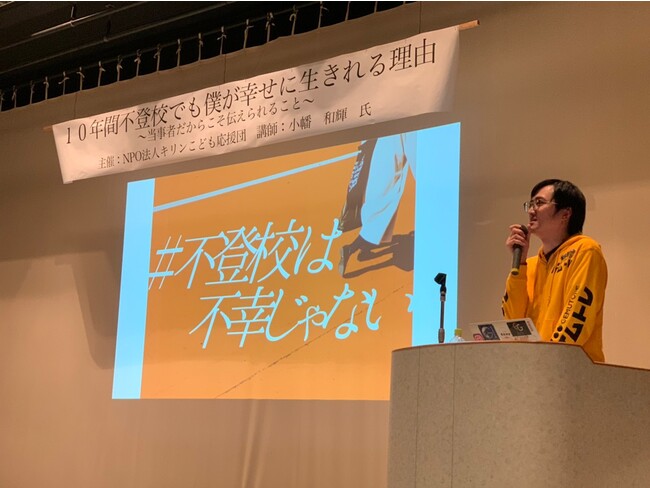 [# School refusal is not unhappiness]
A child who decides not to go to school is taking a big step. It’s just that the parties and the parties’ families have a lot of anxiety and conflicts.
Mr. Obata also said that if there are local governments or free schools nearby, it would be good to just consult with them.
The Kirin Children’s Support Group, a specified non-profit
organization, holds an event for children called “Let’s meet at the door” on the first and third Fridays of every month. (Participation fee is free; even those who have not attended Free School Kirin Tobira can participate! Time is from 16:00 to 18:00)
In addition, the “Parent’s Meeting” for parents is held once every two months, and the next meeting is scheduled for December 10 (Saturday) from 13:00 to 16:00.
Parents who have children who do not attend school share their feelings and current problems.
Please feel free to contact us for consultation about free school. Specified non-profit organization Kirin Children’s Support Group Reception hours: Weekdays 10:00 to 16:00 (072-475-6364)
URL: https://kirin-npo.com/
[Reiwa 3rd year about the results of the survey on problems in student guidance such as problem behavior and school refusal]
October 27, 2020 (Thursday), Ministry of Education, Culture, Sports, Science and Technology, Elementary and Secondary Education Bureau, Student Affairs Division
・Number of long-term absentees in elementary and junior high schools: 413,750 (287,747 in the previous fiscal year)
・Of which, 244,940 children did not attend school (196,127 in the previous fiscal year)
・Percentage of non-attendance students among enrolled students: 2.6% (previous year: 2.0%)
https://www.mext.go.jp/content/20221021-mxt_jidou02-100002753_1.pdf Speaker profile 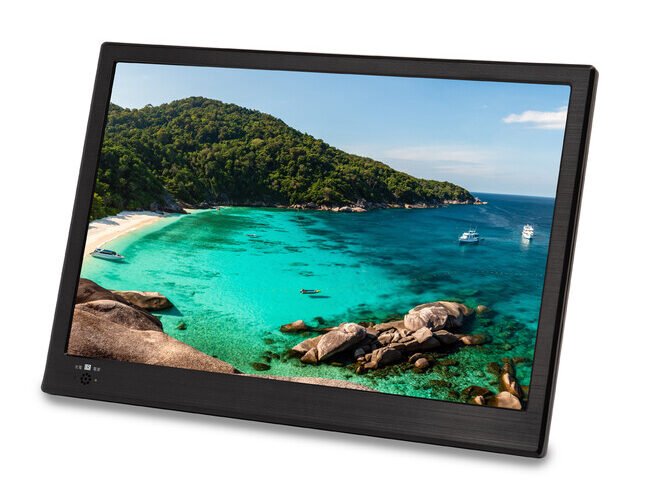 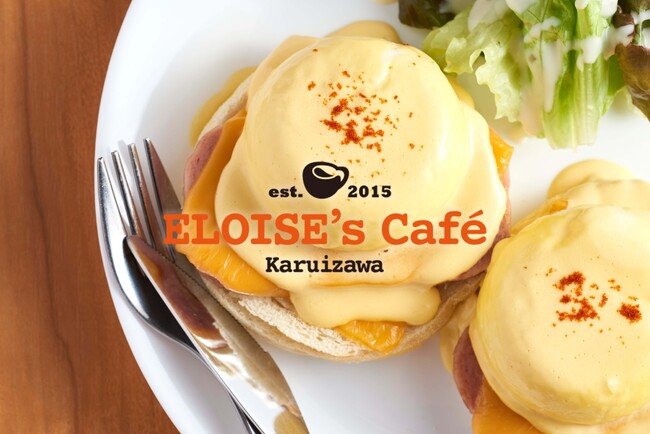 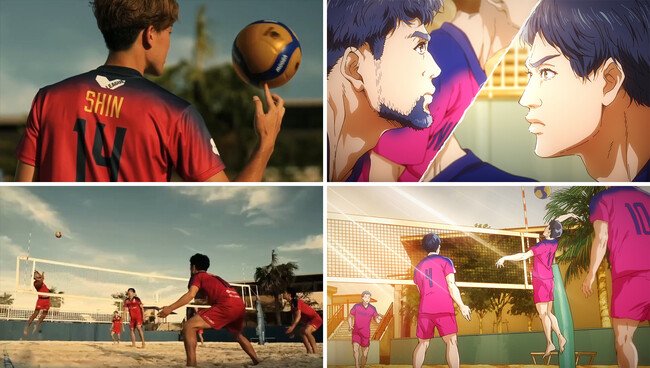