The Social Research Research Center (Headquarters: Saitama City, President: Masao Matsumoto) will conduct an Internet survey jointly developed with NTT DoCoMo from November 19th (Sat) to 20th (Sun), 2022. We conducted a national poll. The Kishida Cabinet’s approval rating is 27%, unchanged from the previous October survey (26%), and the disapproval rate continues to exceed the approval rate for all generations. On the other hand, there was a notable age difference in attitudes toward mask wearing and evaluation of cabinet ministers’ scandals.

A New Standard for Public Opinion Surveys: “dSurvey”
The Social Research Research Center (SSRC) conducted a national opinion poll from November 19th (Sat) to 20th (Sun), 2010. From last month (October), the survey method has adopted the new “d survey” method. The number of respondents was 3,069.
“dSurvey” is a web (Internet) survey that utilizes NTT Docomo’s premier panel. Premier Panels are NTT DoCoMo’s “d POINT CLUB” members who have consented to the provision of personal data to third parties, including smartphone users, including users other than NTT DoCoMo. “dSurvey” jointly developed by the Social Research Research Center and NTT Docomo has made it possible to conduct a complete random sampling (random sampling) survey of approximately 60 million people aged 18 and over nationwide. rice field.
The Social Research Research Center has already conducted situational surveys using the “d Survey” in various elections, including the 2009 House of Representatives election and the 2010 House of Councilors election, and has continued to prove its accuracy. From October 2010, the public opinion survey that detects the approval rating of the cabinet has also been switched to “d survey”, and it is regularly conducted as “SSRC National Public Opinion Survey”.
-Explanatory video of d survey-https://www.youtube.com/watch?v=PjLIPto7v4w&t=20s Survey topic
1. The Kishida Cabinet’s approval rating remained flat at 26%, while 37% said, “I want Prime Minister Kishida to resign as soon as possible.”
2. Measures against the new coronavirus and the issue of the former Unification Church are the dividing line between support and disapproval of the Cabinet
3. Remarkable age difference in evaluation of future “mask wearing” and ministerial scandals
Kishida Cabinet approval rate 26% vs disapproval rate 59%, “I want you to quit early” 37%
Kishida Cabinet: Approval Rating 27% vs. Disapproval Rating 59% 62%). Support increased by 1 point, and disapproval decreased by 3 points, but there is no change in the tendency for the disapproval rate to greatly exceed the support rate.
Please see [Figure 1]. It shows the Cabinet approval rate and disapproval rate by age. In terms of support, the ratio of the youngest age group between 18 and 29 years old has decreased, so the “young low – old high” type has become somewhat prominent, but disapproval accounts for a majority of around 60% in all age groups. , the flat shape “Lost All” situation continues.
[Chart 1] Kishida Cabinet approval/disapproval rate (by age) [Image 2

By the way, in this month’s survey, we set the question, “How long do you want Prime Minister Kishida to continue as prime minister?” The results of the responses were: “I want you to continue as long as possible” = 13%, “Until the LDP president’s term in September the year after next” = 29%, “I want you to quit as soon as possible” = 37%, and “I don’t know” = 19%. Breaking down the relatively majority of responses, “I want you to quit early,” by age, there is no significant difference between age groups. It may be described as “nopperabo disapproval”.
Regarding the approval rating of the Cabinet by political party, while the LDP supporters (25% overall) have secured 60%, the support rate among those who support no political party (42%) is extremely high at 15%. A rigorous evaluation is given.
■ What separates support and non-support for the Cabinet
From here, let’s check the cross-results of support/non-support for the Cabinet and various issues of the moment. [Table 1] shows the evaluation of “coronavirus measures”, “free vaccination”, “wearing a mask”, “response to the former Unification Association”, etc., divided into supporters and non-supporters. is. In the table, the numbers displayed in parentheses below the answers, such as “evaluate” or “not evaluate” for each topic, correspond to the overall ratio.
[Table 1] Distinguishing factors for cabinet support/non-support [Image 3

It can be seen that the Kishida administration’s response to the new coronavirus and the issue of the former Unification Church overlap with the dividing line between whether or not to support the cabinet. There is a clear distinction between those who support and those who do not when it comes to the assessment of corona measures. Regarding the issue of the former Unification Church, even among the supporters, the percentages of those who “approve” and “disapprove” are evenly matched.
On the other hand, there is no correlation between support and disapproval of the Cabinet regarding the issue of vaccination and wearing masks related to the new coronavirus. Whether they support it or not, the majority of respondents said that they should continue to receive free vaccinations and that they would like to continue wearing (masks).
■ Significant age difference in evaluation of “wearing a mask” and ministerial scandal
However, there is a noticeable age difference when it comes to wearing masks. Please refer to [Figure 2]. The results of hearing about wearing masks as a countermeasure against the new corona are plotted by age. Overall, 62% said they wanted to continue wearing masks, 34% said they wanted to increase the number of opportunities to remove them, and 1% said they were not wearing masks.
[Figure 2] Wearing a mask (by age)
[Image 4 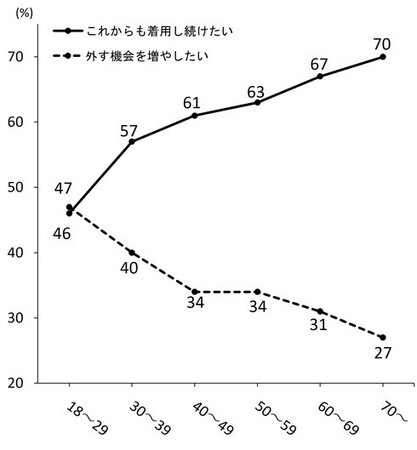 The ratio of “want to continue wearing” has a rising “young low-old high” type, and “want to increase the chances of taking it off” has a contrasting shape with the “young high-old low” type with a falling right shoulder. . The 18- to 29-year-olds, who want to continue wearing the product and want to remove it, are at odds with each other, and the overwhelming majority of the elderly want to continue wearing the product. is.
Speaking of age differences, as I touched on in the commentary on the results of the October survey, I have no choice but to take up the political issue, that is, the politician’s reaction to the scandal. Following Daishiro Yamagiwa, the minister in charge of economic revitalization last month, Justice Minister Yasuhiro Harashi resigned this month as well, taking responsibility for his gaffe. [Fig. 3] The solid line (-) in the figure shows the shape of the age-specific ratio of those who said that it was natural for former Minister of Justice Hari to resign. For reference, we also added the ratio of “Minister Yamagiwa should resign” in the October survey (Note: Minister Yamagiwa resigned on the 24th, immediately after the October survey = 22-23). . Please check the dotted line (…) in the figure.
[Fig. 3] Evaluation of cabinet ministers’ responsibilities (by age) [Image 5 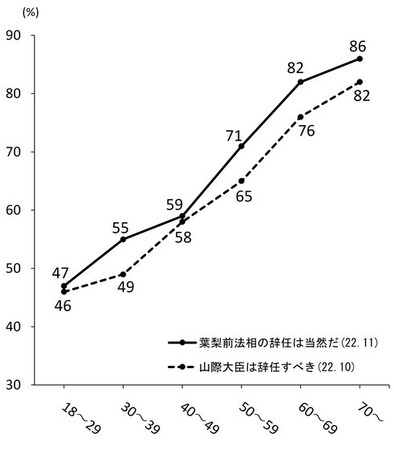 A common trend beyond age in the “Cabinet disapproval rate”, and a noticeable age difference in the “negative performance of cabinet ministers”. This is probably due to the existence of individual differences, such as political and social phenomena that look the same or look different, or that people pay attention to or ignore them. The role and mission of polls are suggested.
★Please see https://ssrc.jp/blog_articles/2022111920.html for the “Questions and Answers” of this survey.