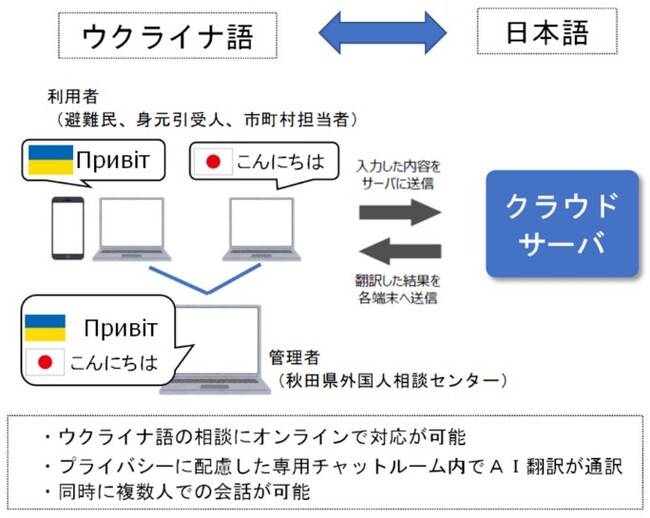 Image of using “RemoteVoice(TM)”
■ Background of introduction
Akita Prefecture has expressed its active support for refugees from Ukraine, and currently accepts them in Akita City, Daisen City, etc. However, in terms of communication in Japanese society, Ukrainian language and remote correspondence have become major issues for Ukrainians. In response to this situation, the Akita Prefectural International Affairs Division and the Akita Prefectural International Exchange Association (Akita City), which are in charge of support, have evaluated the Ukrainian language support and the ease of remote communication with a large number of people. “RemoteVoice(TM)” was adopted as a daily communication tool.
■ “RemoteVoice(TM)” service overview
Toppan Printing has developed various solutions to support
multilingual communication with foreign residents, including the speech translation service “VoiceBiz (R) (*1)”. “RemoteVoice(TM)” adopted by Akita Prefecture is an online AI voice translation service that supports language barriers between foreign residents and foreign tourists. With “RemoteVoice(TM)”, it is possible to participate in a conversation through each terminal when foreigners in remote locations or multiple foreigners of different nationalities who speak different languages ​​gather. The organizer set up a conversation room, and foreign participants connected to the Internet using their own PCs, tablets, and smartphones. Users do not need to install a dedicated app, and can easily use it from anywhere by simply accessing the conversation room from the QR code issued by the organizer. In addition, since you can register the content you want to convey in advance, it is possible to accurately output voice and text even for long sentences.
“RemoteVoice (TM)” site URL:
https://solution.toppan.co.jp/newnormal/service/remotevoice.html [Image 2

You can talk remotely through each terminal, and you can explain to many people and multilingual foreigners at the same time.
[Translatable languages ​​(17 languages)]
Japanese, English, Chinese (simplified/traditional), Korean, Indonesian, Vietnamese, Thai, Burmese, Brazilian Portuguese, Spanish, French, Filipino, Khmer, Nepali, Mongolian, Ukrainian
[Specific use cases]
1. For explanations and explanations at sightseeing events and tour guides “RemoteVoice(TM)” is used for explanations and commentary by Japanese MCs at sightseeing events and tours for foreign tourists. .
2. For life guidance at school and contacting parents
In order to communicate with foreign children/students who cannot understand Japanese and their parents, we use “RemoteVoice(TM)” to communicate in the classroom and remotely.
3.For foreign citizens who do not have a phone number
Foreigners who do not have a phone number and do not have a SIM-free smartphone cannot use the telephone interpretation system for consultation, so they use “RemoteVoice(TM)”, which allows consultation if they can connect to the Internet.
4. For system explanation and admission guidance for international students The text translation function (created sentence registration function) of “RemoteVoice (TM)”, which allows long explanations with prior registration, is used to explain the scholarship system and admission information for foreign students studying at vocational schools and Japanese language schools. It is utilized.
■ Future efforts
Since 2020, Toppan Printing has been conducting a research
commissioned by the Ministry of Internal Affairs and Communications, “Research and Development on Advancement of Multilingual Translation Technology” (*2). The automatic translation technology developed through this project will meet the needs of simultaneous
interpretation in a wide variety of situations both in Japan and overseas, creating an environment in which there is no language barrier in socio-economic activities. In the future, we plan to further expand the functions of “RemoteVoice(TM),” such as
implementing the simultaneous interpretation technology developed in this project.
*1 VoiceBiz(R)
This is a multilingual speech translation service that allows you to select from 30 languages ​​and supports the registration of proper nouns and fixed phrases. The translation engine uses AI translation technology using deep learning, which is being developed by the National Institute of Information and Communications Technology (NICT).
*2 “Research and development related to advancement of multilingual translation technology”
In order to promote the Global Communication Plan 2025, this initiative aims to upgrade the technology of “consecutive
interpreting”, which has already been put into practical use, to the technology of “simultaneous interpreting” so that it can be used in situations such as business.
* “QR Code” is a registered trademark of DENSO WAVE INCORPORATED. * Product and service names mentioned in this news release are trademarks or registered trademarks of their respective companies. * The information contained in this news release is current as of the date of the announcement. Subject to change without notice.
that’s all 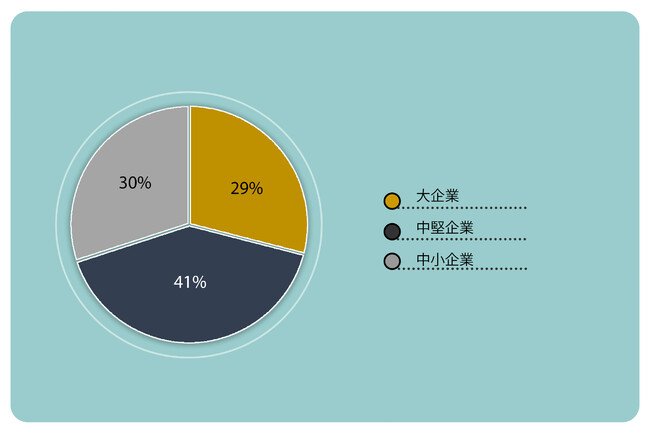