From November 20th (Sun) to 26th (Sat), 2022, UNIQLO will invite 331 university students from 11 countries participating in the Model United Nations World Convention (hosted by Kobe City University of Foreign Studies) to be held in Kobe. As part of our “PEACE FOR ALL” project, we will donate original T-shirts designed for this year’s world competition.
At this year’s convention, university students will discuss themes focused on “peace” based on the various international issues that are occurring around the world. UNIQLO supports this initiative by collecting words inspired by the theme of this year’s event, “Peace,” from the participating university students, and creating an original T-shirt designed with these words on the Japanese “origami crane” that is folded with a wish. was produced.
Koji Yanai, Group Senior Executive Officer, Fast Retailing Co., Ltd., said, “I think it’s a very valuable opportunity to interact with students who are seriously thinking about the future of the world at the Model United Nations. I look forward to the day when we can work together to lead the world in a better direction.”
A T-shirt is a wonderful item that allows the wearer to express and share their feelings. UNIQLO has launched a charity project called “PEACE FOR” that sells T-shirts designed with the wishes of world peace. ALL” will be rolled out from June 2022. The T-shirts donated this time are produced as part of the “PEACE FOR ALL” project. A presentation ceremony will also be held on November 23 (Wednesday). [Image 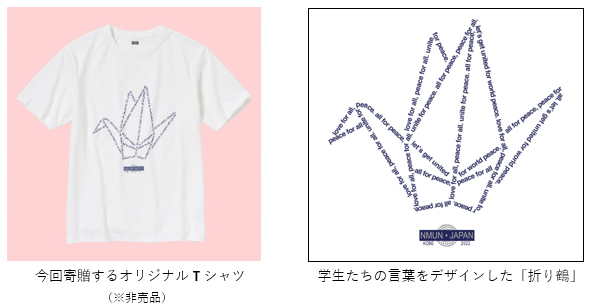 A Model United Nations is a conference in which participants assume the role of a delegation of a country different from their own, and deepen their understanding of international problems Educational activities aimed at improving comprehensive international
communication skills, including negotiation skills, discussion skills, and language skills.
The National Model United Nations World Congress is the largest convention among Model United Nations activities held around the world. Universities around the world host the event, but the 2020 event has been postponed to 2022 due to the impact of the novel coronavirus epidemic. This tournament will be held in Kobe for the first time in six years and for the second time.
This year, Kobe City University of Foreign Studies will be the host school again, and will be held from November 20th (Sun) to 26th (Sat). Based on the various international issues that are occurring around the world, university students from 11 countries around the world, mainly Generation Z, will discuss “peace.”
Details about this release:
https://prtimes.jp/main/html/rd/p/000000034.000068741.html